2 min read
Add comment
FacebookTwitterRedditPinterestEmail
The greatest film critic of all time, Roger Ebert, has died at the age of 70.

The greatest film critic of all time, Roger Ebert, has died at the age of 70 from complications with cancer. 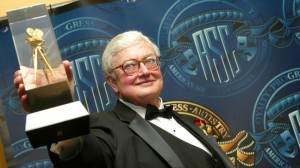 Ebert was well respected among the film community, being the first critic to win a Pulitzer Prize, as well as have his name added to the Hollywood Walk of Fame in 2005.

He reviewed movies for the Chicago Sun-Times for 46 years and was a presence on television for 31, often alongside his friend, fellow critic Gene Siskel.

Known as a humble, kind, and brave man to those around him, Ebert wrote within his memoir:

“‘Kindness’ covers all of my political beliefs. No need to spell them out. I believe that if, at the end, according to our abilities, we have done something to make others a little happier, and something to make ourselves a little happier, that is about the best we can do. To make others less happy is a crime. To make ourselves unhapy is where all crime starts. We must try to contribute joy to the world. That is true no matter what our problems, our health, our circumstances. We must try. I didn’t always know this and am happy I lived long enough to find it out.”

We salute you Roger Ebert. Two thumbs up.