An intelligent new TV show is causing quite a stir on Monday nights. Bates Motel is a prequel to Alfred Hitchcock’s famous horror phenomenon, Psycho, which was released in 1960. This modern interpretation is just as suspenseful and mysterious as the movie, but perhaps a bit more graphic.

In the pilot episode for example, a rape scene is clearly shown, as well as other instances of violence.

The overall tone of the show is creepy by itself. Norman Bates, a quiet seventeen-year old boy is uprooted from his old life and moves to a new town with his mother. Interestingly enough, Norma is the mother’s name, creating a strange link between mother and son. Almost every scene is infused with strange, almost flirtatious smiles and stares between the two main characters. As the show’s plotline escalates, it becomes clear that a power struggle exists between them as well, with Norma attempting to control her son’s actions at all times. 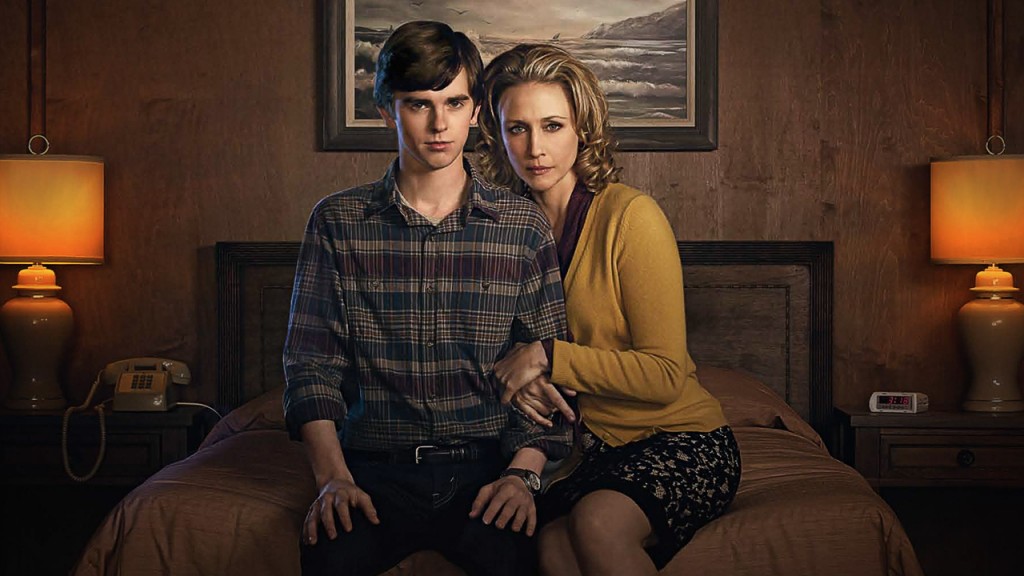 Bates Motel delves into the psychological aspect of a thriller. Every move Norma makes is quite deliberate, but she leaves the audience wondering, “What the fuck?” Played by the talented Vera Farmiga, Norma is a character whose presence hums with a subtle insanity. Viewers will be wondering just what she’ll do next, as well as what demons she has faced in her past. Norma’s “close” relationship with her son is unsettling to watch, yet subtle and guaranteed to draw attention. But the show’s underlying sexual undertones don’t stop there. When Norman arrives in town, he encounters high school parties, pretty teenage girls and a mysterious journal with violent sexual images drawn on its pages.

The town itself houses some pretty interesting characters. There is a hint of mystery surrounding its inhabitants, especially their means of making money. Even the policemen are shady at times.

There is also an obvious separation between the Bates family and the outside world. Norman, played by Freddie Highmore, is a sheltered teenager. He is torn between experiencing life for himself and staying with his needy mother. He wears the familiar collared sweaters the character donned in Pyscho, while the young people in town sport tight jeans and familiar fashions. Even Norma is almost always shown wearing a simple skirt and button down, as if she is still a housewife from decades past.

It is a bit strange to see Norman Bates with a cell phone when audiences are accustomed to the character from the 1960’s. However, the show manages to hold on to a timeless quality through the personalities of the characters, and even the set design. Inside the motel, the lighting is always dark. Old bookcases and furniture create a “haunted house” look, which is quite similar to the original set from Psycho.

You don’t have to know much about the original movie to enjoy Bates Motel. Fans of suspenseful shows such as American Horror Story and The Walking Dead are also starting to enjoy it, as it has a similar atmosphere.

Visit aetv.com/bates-motel to watch the first episodes. Tune in to Bates Motel on Mondays at ten on A&E.