3 min read
9 comments
FacebookTwitterRedditPinterestEmail
We're thrilled to be giving away a copy of The Official Digimon Adventure Set: The Complete Second Season, along with other great Digi-prizes.

In anticipation of its upcoming release on March 26th, we’re thrilled to be giving away a copy of The Official Digimon Adventure Set: The Complete Second Season, along with other great Digi-prizes.

In order to win, all you need to do is leave a comment below that answers the following question:

If you could have a digital pet, what would it be? 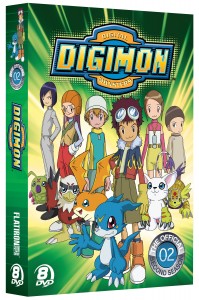 Four years after Tai, Mimi and the rest of the DigiDestined brought peace to the digital world and found their way back home, the Digimon Emperor–a new villain–threatens the world and its Digital Monsters. With some of the original kids off to high school, a new generation is chosen to defend and save the world from evil.

Davis, Yolei, Cody, and Ken join T.K and Kari to form the new Digidestined team. Together they journey back to the Digital World to battle dark forces and free all the Digital Monsters from their control.

For the first time ever DIGIMON ADVENTURE SEASON 02 (the direct sequel to Digimon Adventure Season 01) is available in an 8-disc official collector s set, complete with all 50 episodes! 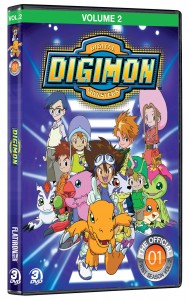 Explore the Digital World with Tai, Matt, Sora, Izzy, Mimi, Joe, T.K., Kari and their Digimon in DIGIMON ADVENTURE: VOLUME 2. This 3-DVD set includes 18 episodes of the classic DIGIMON ADVENTURE series and follows the group as they learn the identity of the eighth DigiDestined child.

By now all the Crests have been gathered, but in VOLUME 2 the kids must defeat Myotismon, a villain who wants to prevent the group from activating their Crests by capturing the eighth DigiDestined child from the Real World. Using a dimensional gate, Myotismon and the kids journey between Worlds attacking and defending as they go. Finally back in the Digital World, Myotismon is defeated and the eighth Digidestined child is revealed. But just as the kids think their job is finished, they look up to see the Digiworld upside down and realize they must fix things in the Digital World before the Real World can return to normal.

The contest closes on Monday, March 25 at midnight. We’ll then select one Grand Prize winner and three First Prize winners from the comments below. Those winners will be notified via the email address they used to sign up.

– Make sure to use a valid e-mail when commenting or I won’t be able to contact you for an address to ship to.
– Your email will be added to our post subscribers list. You may unsubscribe at any time.
– Prizes will arrive via Flatiron Film Company.
– Contest ends on March 25rd @ 11:59 PM EST. Comments left after that time will be ineligible.