The Incredibly Stupid Misadventures of Fred Fortune and his Chums: Issue #0 – book review

Fred Fortune’s Misadventures is the life’s love work of  writer and artist Jonathan Odds. He started Fred back in the 80’s, had many strips published in the 90’s and is now working on a whole new series of misadventures. 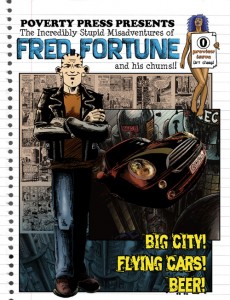 Let us start with the cover. I love it; it is very reminiscent of New England’s very own “Building 19” style (anyone not from NE can Google it). The backdrop is plain notebook paper, with a wallpaper of tiny comic pages underlying an excellently drawn image of a flying car. The issue number (Preview issue #0) is being held by a purple haired naked woman, showing just the tiniest hint of nipple. What’s not to love?

Moving on to the first couple of strips in the preview; the comic is extraordinarily reminiscent of the future setting from Total Recall. We have flying cars, a few aliens mixed in with mostly renegade, swearing, drinking, poor, human criminals trying to get a decent drink with the out-of-control government authority figures trying to control everything the population does. Throw in a little bit of the Judge Dredd universe… fine by me!

The first of the 90s strips is a good intro to Fred, but it left me a little bit disappointed. It’s basically a quick gag where a cop chases Fred in his flying car, ends up being clotheslined by a, um… clothesline, and gets stuck hanging off it in what looks like an old lady’s nightgown. Pretty boring and predictable. This seems more like an Archie and Jughead comic to me than an off-beat indie comic with a nipple on the cover.

Moving on… the second bit was one where Mr. Kevin Rut calls up Fred and offers to pay him to basically take “interesting lessons.” You see, Kevin is so boring that he can’t keep friends around, or even his wife. Fred ends up taking Kevin on a trip around the city where they end up in another car chase with the cops. In the end, Kevin ends up not changing, but a woman finds him and tells him he shouldn’t change who he is and try to be like Fred, but rather be himself and people will eventually like him for who he is… or something like that.

After this is a fairly hilarious short strip ripping on Superman.

In the middle of the preview issue is a series of character profiles. This is where Fred Fortune starts to get interesting. From the introductions and the strip from 2007 following it, Fred Fortune shows an enormous amount of potential. I think it’s pretty clear that the author took a break from Fred, went to art school, and came back with guns blazing. Oh wait, the author is British… so came back with nightsticks swinging? 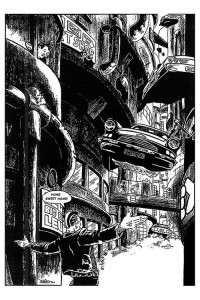 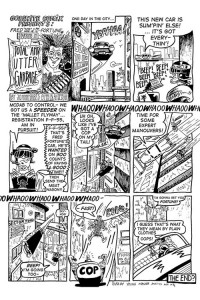 Anyway, the strip “Invasion Force” written in 2007 was a bit longer, and therefore much more developed and resolved than the earlier issues. It was a funny story about an alien invasion on the city. The police can’t do anything without the proper “forms” being filled out, which could take up to 8 weeks, so Fred and his large lipped, big-tittied girlfriend decide to take care of it themselves. I’m not going to give too much away, but everyone ends up having drinks together at the bar by the end. If the 2000-era Fortune comics are going in this direction, then I think we have a winner.

Many of the characters are very likeable and interesting. We have Fred, of course, who is your typical “bad boy on the outside, but most likely will end up having a big heart” kind of fella. His girlfriend, Daisy, is a large-breasted *ahem*, “dancer” who has a huge heart and acts as the voice of reason and Fred’s conscience. There are also several seedy bar characters guaranteed to keep the cast colorful and amusing. One character I was not too keen on was Fetty the bounty hunter. He wears a helmet that looks a lot like another bounty hunter we all know. It’s probably meant to be a dedication, but it’s a bit too obvious, I think.

Complaints? I wish that the comic would either stay rated PG, or go straight to R. Right now it’s in that awkward PG-13 area, where they bleep the swears, but there’s a nipple on the cover. I think an audience needs to be chosen and it needs to be fully realized. Plow forward with nudity, violence, swearing, and political incorrectness if that’s your audience… or tone it down and make it more fun and geared toward children, like where Han Solo is about as “rogue” as it gets in Star Wars. I would offer up Tank Girl as suggested comparison reading. I think the author needs to erase any inhibitions he has and push the envelope to the limits. This comic has potential, potential, potential, but is not fully realized.

Overall, we have a delightful mash-up of Total Recall, Judge Dredd, and The Fifth Element. Picture any over-the-top, future-based universe with some implied swearing, drinking, and giant boobs. I mean, really, what’s not to like? The newer comic was fun, interesting, and the plot was complete and relevant. The preview issue was good because it shows how the author has developed over time. If he stays on the path he’s currently on, with a little bit more out-of-the-box thinking, I think Fred Fortune will have a long and successful future.

You can find out more about Fred at jonathanodds.co.uk

You can also find the author on deviantart at jonnio.deviantart.com

If you would like to check out Fred Fortune for yourself, Issue #0 can be found at indyplanet.com/store for the low, low price of $4.50… series issues coming soon.