Wreck-it Ralph – References You May Have Missed

3 min read
1 comment
FacebookTwitterRedditPinterestEmail
If you weren't paying close attention, you may have missed some of these more obscure references in Wreck-It Ralph.

Call me late to the party, but after 3 attempts, I finally got a chance to view Disney’s “Wreck-it Ralph” in its last week in theaters. I personally enjoyed the visuals of the movie, I thought it had a really nice plot, and its definitely going to be one of my favorites. One thing that I was doing that I’m sure many other gamer fans were too was keeping an eye out for the many allusions and references to other video games that made their way into the movie. Here are some maybe not so obvious references that made their way into “Wreck-it Ralph”.

Sonic makes numerous cameos in the movie, mainly appearing with other characters in the background of Game Central Station. He has one spoken line of dialogue when appearing on a display monitor, issuing a friendly reminder that if a person dies outside his or her own game they will be gone forever. This lesson seems reminiscent of the morals and life lessons given in the ending segments of the cartoon Adventures of Sonic the Hedgehog.

In the latter half of the movie, Ralph learns the truth behind why Vanellope von Schweetz, AKA “The Glitch”, really is a glitch. In a flashback confession from Sour Bill (King Candy’s henchman) Ralph learns that King Candy gained access to the game’s programming and turned Vanellope into a glitch by disrupting her code, thereby locking up everyone’s former memory of her. While opening up the realm into the game’s code, King Candy is shown using a large NES controller to enter the button combination shown above. This sequence of button pressing is the well known cheat code known as the Konami Code which is useable in games like Contra and Castlevania. 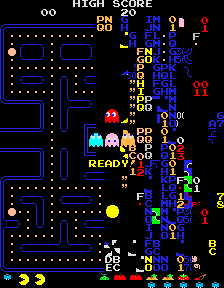 Now here is a reference that you would have only seen if you had waited in the theater after the ending, the epilogue, and the entire roll of credits (and risked getting dirty looks from the clean up crew). One thing about classic arcade machines is that they had no end to them; they just keep going. Or did they? Many games, due to hardware limitations, would have a bug that would keep the game from progressing any further after ridiculously high levels. In particular Pac-man has a kill screen that appears when level 256 is reached that corrupts part of the screen.

If you had waited after the credits were done, the Disney castle logo appears but the screen suddenly gets corrupted and half of it becomes a Pac-Man kill screen, but with the sprites of Wreck-it Ralph thrown in.