Bane: One Bad Guy Who Can’t Get a Break

To say I was thrilled to see Bane as the chief villain in The Dark Knight Rises is an understatement. I’ve grown to be fond of the big, venom-loving, back-breaking bad guy. So far, Bane’s introduction to the non-comic reading world has seen him as a juiced-up idiot flunky afterthought in Batman & Robin (the “George Clooney” movie) and in the various cartoons as a character with widely different interpretations, mostly taken out by electrocution or simply shutting off his venom feed.

So I was thrilled to see Bane FINALLY get his due in TDKR. And wow, he was menacing, ruthless and a villain equal to the task of matching up with Batman. For about 80% of the movie, Bane is the guy. Then, in about 10 minutes we have the scene with the big reveal of the REAL bad guy, and Bane is once again relegated to second banana status. After that, Catwoman shows up, shoots Bane with big guns… and that’s the last we see of him. 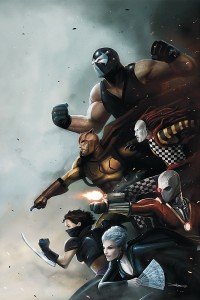 I kept waiting for the scene that showed Bane stumbling away, ready to fight another day. He deserved that much, I thought. Maybe if this was not Nolan’s absolute-for-sure, last Batman movie, he could have done that. And Nolan has not been one to go and kill off bad guys in his movies, one thing I’ve always appreciated (I still think Ras Al Ghul got away. Hey, I’m a comic guy; these notions are hard to shake). So Bane once again gets a raw deal on the screen. If there is any consolation, this was by far the best Bane portrayed for a mass audience. For folks who would like a deeper take on the Bane character, I would strongly recommend Bat Family super-scribe Gail Simone’s Secret Six that ended last year to make way for the New 52.

In that series, Simone really gives Bane a chance to shine, and be more than a villain who “broke” the Batman and then got his comeuppance. Bane struggles with his life post-Batman, post-Venom and finds a warped family within this group of killers, ultimately being one of the leaders of the group. There is a lot of growth with this character in this series, and it’s ultimately what made me kind of root for the guy in the movie.

I’m left to wonder if Nolan read the Secret Six series during his research. I have not seen this discussed much, but in that series, Bane takes on the role of protector/father figure for a female villain, Scandal Savage, who has major Daddy issues, what with her father being the immortal legendary super-villain Vandal Savage.

Am I the only one who sees some similarities there? The one major difference in the Bane/Scandal dynamic over the Bane/Talia dynamic, is that Bane I guess is “in love” with Talia. That was not the dynamic with he and Scandal, as she makes it quite clear she only has an eye for one of the sexes, and it’s not the one that Bane is a part of.

So, Secret Six, 36 issues of action, violence and quality character development, and it’s probably very affordable at your local comic book store. If you’re a Bane fan, or just intrigued by the guy, give it a try.