2 min read
Add comment
FacebookTwitterRedditPinterestEmail
When Warehouse 13 returns to SyFy on July 23rd for the start of its 4th season, they'll be joined by Star Trek: The Next Generation's Brent Spiner. 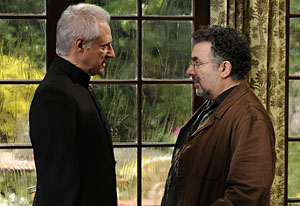 When Warehouse 13 returns to SyFy on July 23rd for the start of its 4th season, they’ll be joined by Star Trek: The Next Generation‘s Brent Spiner.

Spiner, known to Star Trek fans as Data, has signed on for at least 6 episodes in the upcoming season. He’ll be playing Brother Adrian, the leader of a top-secret sect known as the Brotherhood of the Knights of the Black Diamond.

Following the catastrophic events that took place in the Season 3 finale, Artie and the agents of Warehouse 13 are looking to rebuild.

“Artie Nielsen (Saul Rubinek) and the gang are on a mission to pull their lives back together and Brother Adrian is a major obstacle to that,” says executive producer Jack Kenny. “The Brotherhood is descended from the Knights Templar and connected to the Vatican. It is charged with the protection of many powerful artifacts, one of which Artie desperately needs to make everything right again. The use of this object will unleash an incredible evil and Brother Adrian is not about to see that happen. He heads a sect that is powerful and obsessively devoted and follows no rules. The Brotherhood will do anything to achieve its goals. They are gifted fighters who are willing to go to their deaths, if necessary.”

This isn’t the first time actors Spiner and Rubinek have crossed paths either. Twenty-two years ago, they shared the screen on an episode of Star Trek: The Next Generation titled “The Most Toys,” in which Kivas Fajo (played by Rubinek), a collector of rare and precious objects, kidnapped Data (played by Spiner) for his collection.

This isn’t the first time a Star Trek alum has appeared on the show either, as Rene Auberjonois (Odo, Star Trek: Deep Space Nine), Kate Mulgrew and Jeri Ryan (Captain Janeway and Six of Nine, Star Trek: Voyager) have all appeared in past episodes.

A scene from “The Most Toys”:

This edition of the Geek News Brief includes stories about Marvel's Spider-Man 2 and Marvel's Wolverine video game announcements, additions to the...