6 min read
Add comment
FacebookTwitterRedditPinterestEmail
My fanatically geeky nature has shaped elements of my character and been a much needed emotional crutch to help nurse mental wounds that could have otherwise crippled me.

The other night I was having a conversation with my mom about a hubcap. Namely, we were discussing that we think the hubcap that has randomly decided to depart one of the wheels on my car named Tyrone is likely a result of a guy hitting my car on one of the three truly snowy days Cleveland has gotten this year. After cursing a couple times about the new, unnecessary, and extremely unwanted hassle, I shrugged and began to make jokes that I can’t recall now but I assure you were likely pun-based and silly.

Without going into narcissistic and unrequested detail, I’ve had a hard past few months. Work troubles, car troubles, financial troubles, friend troubles, and a few less-than-awesome random happenstances have spelled for a hard end to 2011 and start to 2012. But I’m remaining as positive and upbeat as I can. I am striving to be bubbly and to not let the avalanche of bad bury me too deeply.

This attitude evidently made my mother marvel.

She repeatedly uttered a statement that made it clear that she doesn’t know how I’m going about my days, and that she is surprised that aside from a few late night whining sessions I haven’t been leaning on her more than I normally do. I was flattered and initially brushed it off as a mother thinking more highly of her daughter than was warranted, as parents are known to do. But then friends started mirroring her thoughts. For a brief moment I let myself think that I have been truly a model of strength-of-will and mind-over-matter, and that someday monuments will be erected in honor of my fortitude.

And then I came back down to reality.

Here’s the thing – I know that I’m doing nothing more than playing the proverbial hand I’ve been dealt. I’m doing my best to make the most of this rough patch in my life, and if I have my druthers I will come out of it better than I went in.

That doesn’t mean that there haven’t been difficult moments, though. Far from it. I’ve had nights of full blown insomnia that lead to days were I physically and mentally can’t concentrate on anything. There have been moments where I’ve snapped at the people who have gone out of their way to make sure I’m okay for no other reason than they dared to remind me that there is cause for them to worry about me. It’s been trying, but I’ve found solace on the hard days by reaching out to my old, reliable friend – rabid obsession. 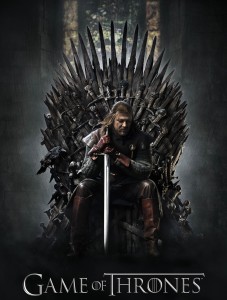 Following in a pattern I have come to set over the years, I have found a new topic to allow myself to become completely engrossed in instead of wallowing in my personal brand of self-pity. This particular round of life-trying-to-pin-me-to-the-mat is always going to be associated in my mind with being introduced to, and consequently becoming wholly immersed in, all things Game of Thrones.

Around the beginning of the year I was introduced to the epic HBO series, and I haven’t looked back. I’ve begun to devour the 800-page-each series of books that serve as the faithful foundation. I will discuss it at length with anyone who will humor me, much to the eventual dismay of many of those individuals who had never even heard of the series until I ambushed them. Gradually I am getting to the point that I don’t know how I will handle waiting for Season 2 to start in April, a fact that becomes all the more true every time I look at my Droid and see my Daenerys wallpaper taunting me.

This level of fanaticism may seem silly for an adult to exhibit, but for me and many of those I identify with most strongly, this is how we are able to find the means to move our lives forward.

For instance, I’m finding that by escaping into George R.R. Martin’s world that is dominated by valiant men and resilient women, I am finding parallels to my personal trials. Reading about this fantastic realm is providing minute but vital aids to guide how I am approaching the challenges I’m facing. While I don’t blatantly think, “How would Eddard Stark respond to this situation?”, I do find myself reminiscing about characters and their stories enough during my day-to-day life that their traits have begun to seep into my subconscious, causing me to feel more head-strong and positive in general. It’s a small element of how I am working through my dramas, but it is proving to be subtly, yet significantly helpful.

However, this is by no means the first time I’ve done this. Finding a nerdy obsession to sink into has been how I’ve gotten past all of the major hurdles in my life. As a child Calvin and Hobbes and The Simpsons were much-needed, entertaining escapes from moments when I was being hassled by classmates who didn’t understand me. My initial foray into the realm of comic books was sparked by being alone for the first time in the big city of Chicago my freshman year of college, and exploded into a means of dealing with midterms and stressful times throughout my four year experience. And every time I’ve had a heart-wrenching break up, the entire Sex and the City series has been there on DVD to help me laugh and have the cathartic cries that let me regain my sense of calm. 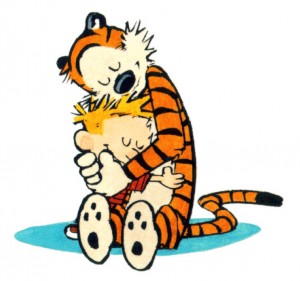 Essentially, my geekiness is my security blanket. It’s there for me to wrap myself in during bad times, swaddling me in grand or humorous tales that are separate from my trials and woes. I can snuggle in with the nerdy obsessions du jour and quickly come to feel temporarily safe and cozy. Though it is constantly evolving and changing in form, it has and always will be the way that I cope with tumultuous times.

There may be a touch of my greater personality that led to the aforementioned marveling of my mother and friends, but in truth I know that I have merely been exhibiting nothing more than a geek attempting to be at her best. I’m facing adversity with intelligence, wit, and a strong support system of friends, family, and pop culture, and in the end it will get me through it smoothly.

Over the years, my fanatically geeky nature has deepened my educational experiences, shaped elements of my character, and has also been a much needed emotional crutch to help nurse mental wounds that could have otherwise crippled me. With all of that being attributed to one trait, it is undoubtedly one of my most cherished, and may I say kick ass elements of who I am.

And I totally dig it.