Multiplayer Gaming Isn’t Dead (But It Deserves To Be)

I have a deep confession to make; I’m old, yet am fascinated by what society considers childish. Call it a vice, but I will tell you what I like has virtue. Say it lacks any redeeming value, and I will counter with “How deeply have you actually looked, or have you merely done a cursory exam on the surface and now pass judgement?”

I am speaking of, and have been playing interactive games for the better part of twenty-six years of my life. There was a past when I used to beg family members for Washington’s silver and green loot so I could bound to the now essentially defunct arcade. In the present I arrive home in the evening after work, grab a victual, and sign on to my PS3, 360, Wii, PSP, DS etc. Then there’s an undoubtedly murky future I cannot prognosticate. I have seen games evolve from blocks and sticks of dull, lackluster color to vivid, fully rendered replicas of human beings. I’ve seen the stories games tell go from a single, basic screen of blocky letters and even blockier text to slick, expressive, cinematic scripts that make the Hollywood elite look like amateurs on any level. Yet, as the years wane I currently feel that, for the most part, gamers are being cheated in this day and age out of the more personable camaraderie the video arcade (and classic consoles, circa 80’s-90’s) once offered. Don’t get me wrong, I still afford myself every opportunity to play games these days, yet am boggled by the idea of game companies raping social “video game gatherings” and instead are providing odious multiplayer experiences that are repackaged from year to year with a high gloss finish. For the most part, gone are the days of the finely crafted stories games used to provide, replaced by developer exhaustion and their need to place heavy emphasis on multiplayer experiences that offer mindless diversions for gamers. They shirk any thought of storytelling and narrative that really, in my opinion, drives games to be fun and makes them a form of entertainment comparable to literature. I like to call games living, breathing, literary fabrications, but that’s just me. 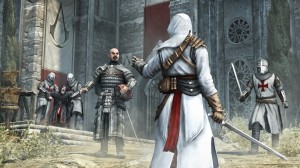 So, with that out of the way, let us not forget that long ago, video arcades were the social gathering places where friends assembled to play what were “true” multiplayer games. You went there on a Friday or Saturday night or afternoon, respectively, took your limited “gaming dollar” and hung out, playing face to face with friend and opponent alike. Even upon the death of the arcade in the 1990’s, house parties still endured where gamers would gather on Friday nights to play the latest and greatest on consoles that offered both face to face fun and challenge and actually made gamers get off their ass and go somewhere to be with other people. Today, gaming has supposedly “evolved” and we can play with people across countries and continents… I say rubbish. We hide behind our HDTV’s, put on a decidedly robotic headset and engage in some mindless multiplayer diversions of who can outgun who in a more stylish manner. The death knell of the arcade and expansion of online play has limited peer interaction in person and relegated gamers to trash talking gits who scream obscenity into headsets. What happened to the atmosphere gaming used to have? We have an industry of highly successful and foul franchises that monopolize both the market and mind of the gamers out there. I feel that the majority of gamers tend to limit themselves to the few popular franchises and invest time in marathon multiplayer vapidness for hours on end. To me, it spits vile refuse in the face of those developers who actually spend time doing both a) historical research and b) real, deep, story crafting as opposed to some companies that “half ass” the story of a game and spend 80 percent of the time focusing exclusively on multiplayer for the troglodyte. Allow me to explain with an illustration: the Assassin’s Creed franchise. By no means is it revolutionary. Hell, the first one kinda sucked compared to the others. And yet, the franchise has done something many modern games apparently lack, mixing elements of historical fiction and fantasy together. One could actually learn something about locales of the ancient world, art, and what literature was available at the time. Gamers GET something out of the game more than the sheer enjoyment of a man in white vestments killing people if they look beyond the surface realm. Even games like Uncharted 3 had references to Of Mice and Men. The Zelda franchise has always had deep stories that mirror the evils we face in reality and provide high fantasy the player can get lost in. All these games mentioned are developed by companies who care about the true elements that make a game good: the artistry of storytelling and engaging the player’s mind. And they execute this with flawless panache.

On the opposite end of the spectrum, let’s take a look at what I will refer to as “Gaming Franchise B.” It shall remain nameless, but open to readers’ interpretations. This franchise has manacled the minds of gamers in the tyrannical vice of conformity and apathy. The developer has both the audacity and arrogance to market exorbitantly priced collectors packages, sell fifty dollar packages of fluff that add little or no real value to the core of the game itself, and yearly, slaps on a fresh coat of paint and calls it new. Then, the consumer, obviously not of sound gaming mind, runs out to make the midnight purchase. In the common vernacular, one would call this the efforts of a modern day snake oil salesmen, marketing false elixirs to the zombified masses, enchanting them for months on end with a product I feel executes both the art of good storytelling and social, personable gaming interaction at the guillotine. It is gaming’s highest travesty, and I for one, will NOT be sold.

The point of my little diatribe is twofold. While this communique may never reach the world of all gamers, it will hopefully inspire the gamers’ soul to someday try the game that is substance over style, to drag oneself to a social outing and turn off the repellant multiplayer. To maybe drag your console to a friend’s house, crack a few and toast gaming camaraderie in person. Stop feeding the garbage dump of the top selling franchises that are popular and successful. Do they deserve to be? Take the road less traveled next Fall when the holiday gaming season rears its ugly head. Avoid the repaint and buy something original and fresh. I’ll continue to take story over style any day, along with having my friends over as opposed to jamming a headset in my ear like a cyborg. Multiplayer gaming may not be dead, but it deserves to be when it feeds the insatiable appetite of consumer stupidity. In the end, I dare you to do better.