A Girl Among Geeks: Heroes

7 min read
1 comment
FacebookTwitterRedditPinterestEmail
Despite growing up exposed to the flawed Disney princesses, a Girl Among Geeks has defined a new set of female role models.

A few days ago I met up with an old friend of mine. Since I’m your standard Polack from Cleveland, Ohio we naturally chatted over a few pints of beer at one of my favorite bars. As the conversation drew on we wandered from topic to topic until we landed on how excited I was to see Beauty and The Beast in 3D.

“Typical,” he muttered under a soft chuckle, “a girl whose heroes are Disney princesses…”. As his sentence faded into a fresh sip of beer I found myself aggressively denying his accusation. How could he possibly think a Girl Among Geeks could find any real inspiration from a Disney character?

Our actual heroes? Well… they pack a bit more punch.

As I explained to my bud, it’s not that I don’t appreciate a good Disney movie. In fact, as a child of the late 80s/early 90s I grew up during the heyday of the Disney musical. I knew every word to every song, and in my more tender years I would dance and sing around my house pretending I was a beautiful princess.

However, over the years I have come to see that while Ariel and Belle may be strong protagonists, they are by no means formidable role models for young girls.

At this point in the conversation my friend and I ordered another round and began to go back and forth naming Disney princesses that, while generally headstrong and each possessing unique character traits, all eventually made decisions that in real life would be the foundation for a typical Lifetime movie. 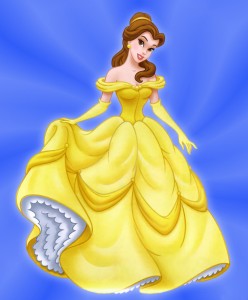 Ariel is willing to undergo life altering permanent physical changes and agrees to give up her family and voice (aka her greatest talent and joy) to go after a man she’s never even spoken to. Jasmine is treated as a commodity by her father, is easily duped by the men around her, and has no true power besides her sexuality to impact any change on those who control her future. And Belle, the very princess I was dying to see in 3D, is a victim of Stockholm syndrome who falls for her emotionally and physically abusive captor.

I’ll spare you the remainder of the list that continued to grow. Essentially we discussed that every Disney princess is an example of how Hollywood and society in general has valiantly attempted to teach girls two things. First, that they can and should vibrantly be their own person, and second, that they will never be complete without the approval of their neighbors and a man, the latter of which must be won over at any cost so that he can swoop in and save them from their lives, making it so they never again have to be the strong individuals that made them unique in the first place.

It’s fairly depressing when you sit down and think about it. Especially when one realizes that many young girls view these beautifully drawn characters in fantastic far off places living heightened lives, and naturally want to be them. They may not be the heroes that we want our young girls looking up to, but unfortunately they are the heroes that we give them first access to, and sadly for many they seem to be ones that stick.

Eventually my friend and I let the conversation move on. We finished our drinks and went our separate ways. As I drove home, though, I found my mind wandering back to the princess portion of the night and my wheels started turning. Yes, I was one of the girls that started out worshiping Disney princesses, but at some point I ditched those role models and grew into new heroes. But who were my Girl Among Geek heroes? And what does that say about myself and my comrades?

The fact is that most every individual needs role models to look up to. Naturally we all have family members, friends, and historical figures that can fill these roles, but many of us also look to fictional characters as examples of the people we long to be but don’t necessarily see in our day-to-day. In general, this goes double for the geekier members of society that tend to spend their younger years standing on the fringes. We grew up saturating ourselves with pop culture references, so it only stands to reason that the characters that we most identify with come from TV, film, and comics.

For Girls Among Geeks, finding strong female characters is of vital importance. If we don’t want our lives to be exercises in changing who we are to appease those around us we need to find examples of women who refuse to compromise their character to be our beacons. Our heroines need to be intelligent, quick-witted, physically capable, enigmatic individuals who can stand up to the most daunting of opponents and not bat an eye. In short, they need to be truly badass.

This is where characters like Sarah Connor from the Terminator series come in. She’s a rough and tumble woman who is literally taking on other worldly creations in order to protect her child. She is physically impressive despite her size, and she regularly shows that she can outwit her competitors in a brilliant illustration of how one can utilize all of her strengths to defeat the toughest of foes.

Which leads me to the iconic Star Wars heroine Princess Leia. Like Sarah Connor she is a fighter, and both women refuse to compromise their missions for anyone or any reason. Over the course of three movies she proves a warrior, a military strategist, and overall an amazing leader. However, we do get to see her softer side when she mourns the loss of her home planet and gradually falls for Han Solo, which has proven to many young girls that one doesn’t have to ignore their emotions in order to be a true badass. 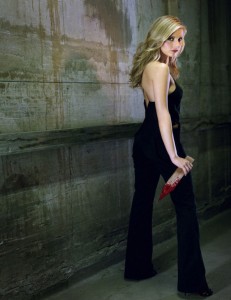 Not that Girls Among Geeks need those pesky emotions at all. Catwoman aka Selina Kyle requires neither an excess of feelings or morals to be one of my role models. True, she breaks the law on a very regular basis with little to no concern for the effect it will have on others. She is undoubtedly a villain. Despite that, though, she is a beautifully complex woman that is rarely found in the male-oriented comic world. When one removes her illegal activities from her character traits, she still stands as a fit, intelligent, crafty individual whose feminine wiles are developed enough to capture a piece of Batman’s heart, even if she will never do anything more than toy with it.

And then there’s Buffy. The iconic Vampire Slayer may not be everyone’s cup of tea, but I can tell you that for myself and many of my friends Joss Whedon’s most iconic character is a perfect example of how a strong young woman can grow out of a literally hellacious childhood. Over the course of seven seasons we see Buffy juggle the same growing pains that many young girls will experience (i.e. dealing with relationship woes, friendship drama, and the difficulty of fitting in) with the responsibility of being chosen to defend her town, and more than once the world itself, from utter destruction. She combines all the common traits that the previous women did with a tenderness that is highly identifiable for young women, making her resilient strength all the easier to identify with and therefore seem more reachable for those that look up to her.

These vividly-drawn dynamic women are my fictional heroes. Unlike the Disney princesses that possess individuality but are willing to compromise it for the approval of others, my role models are definitively who they are at all times. In the face of adversity they neither shrink away nor bend their character. Growing up as a Girl Among Geeks I needed role models that aren’t afraid to be their true selves regardless of the circumstances to help me to feel more comfortable being the same. I’m truly grateful for how they have shaped me.

So, my fellow Girls Among Geeks, who are your fictional heroes? And how have they helped to shape who you have become?