5 min read
Add comment
FacebookTwitterRedditPinterestEmail
Nine months after the initial release of the greatest fighting mash up in history, MvC3 gets the ultimate treatment with a package that falls a little short of being worthy to wield Mjolnir for the ages.

Nine months after the initial release of the greatest fighting mash up in history, Marvel vs. Capcom III gets the ultimate edition treatment with a comprehensive package that falls a little short of being worthy to wield Mjolnir for the ages.

Fans waited for years for Capcom to announce the successor to what was one of the most lauded arcade fighters of it’s time, Marvel vs. Capcom 2. In 2011, gamers got their wish, as Marvel vs. Capcom 3 bombarded gamers with a laundry list of characters from both companies that basically ran the gamut of every hardcore gamers’ and Marvel fans’ dream roster of combatants.  The inevitable Ultimate release has finally seen the light of day, and many people are probably asking, “Is it worth it?”, especially if you bought the original or pricey limited collector’s edition (as I did). I can honestly say, from a Marvel fans standpoint, UMVC3 is a definite purchase, especially if you enjoyed the original. From a Capcom fan standpoint… eh, it’s a little harder to comment on the game in that regard.

Assuming you, the reader, played the original MVC3, let’s talk about the new additions to this version. In terms of interest and balance of the characters, the Marvel roster this time around is truly stellar, especially if you are a comic fan. Favorites like Nova, Ghost Rider, Dr. Strange, Rocket Raccoon (!!!), Hawkeye, and Iron Fist round out the Marvel side of things. The new animations and crazy, over the top finishing moves for some of these characters are truly a sight to behold. Rocket Raccoon, for example, uses Groot in his special attacks and Ghost Rider takes advantage of riding his motorcycle across the screen to attack enemies as one of his hyper combos. Iron Fist’s moves incorporate a lot of martial arts, and  players may find him a kindred spirit and a good pairing with Ryu from the Capcom side. Hawkeye, as a character, was a little bit of a bizarre let down, with his special moves involving trick arrows that are tacked on after a series of control pad/analog stick input motions, and multiple button presses. They vary the type of arrow he uses, each with a special property. Dr. Strange uses many of his classic Marvel spells in his special attacks such as the eye of Aggomotto and the Daggers of Denak, while Nova can fly and use a variety of his cosmic powers in all his special moves. Overall, from what I have played, the Marvel side offers a little more than the Capcom side. 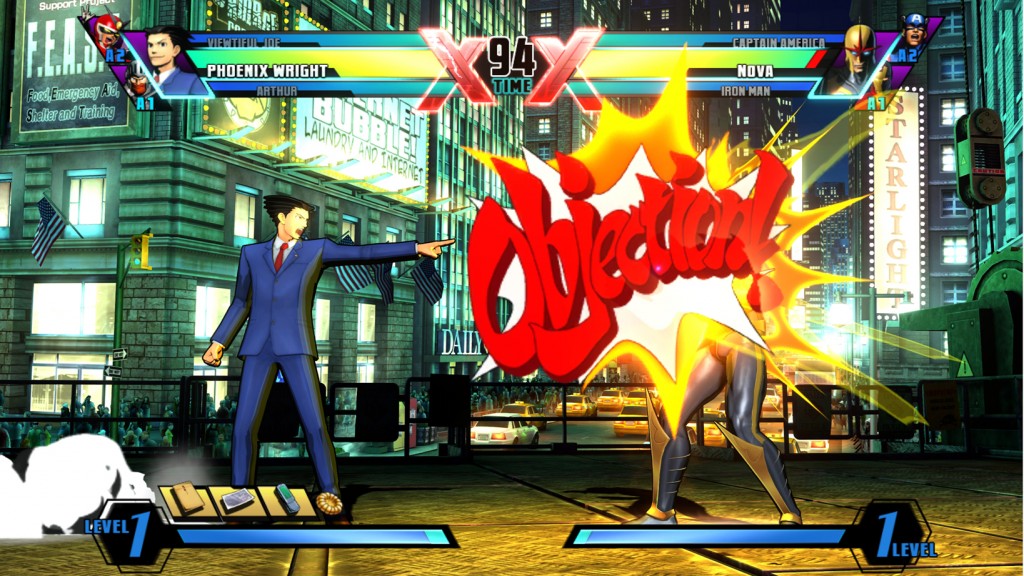 If you thought Rocket Raccoon was a strange addition, try Phoenix Wright, Strider, Frank West, Vergil, Firebrand, and The Nemesis T-Type for the Capcom side of things. By far the strangest character (and most useless) is the Phoenix Wright character. His moves involve his bungling secretary falling into your opponent on screen, and his special moves involve collecting evidence and putting your opponent on “trial”. Absolutely crazy. Vergil tends to be a stylish Dante-esque clone, while Frank West incorporates a lot of Zombies, bats, hammers, and a shopping cart full of weapons in his arsenal. Nemesis is a bruiser type like Hulk on the Marvel side, with a huge bazooka used to inflict damage (also, tendrils that extend from his body for some special moves). Strider, arguably the most requested character, is a quick, sword swinging, blade shooting addition to the roster. Firebrand, a lesser known demon from Ghosts and Goblins and Demons Crest has a lot of flying and special moves that rely on moving quick and passing through the opponent when used. Overall, Capcom got the lesser end of the deal in terms of characters, because some of them just aren’t that interesting in my opinion, and beating Galactus with Phoenix Wright if you are collecting the endings might nigh be impossible. 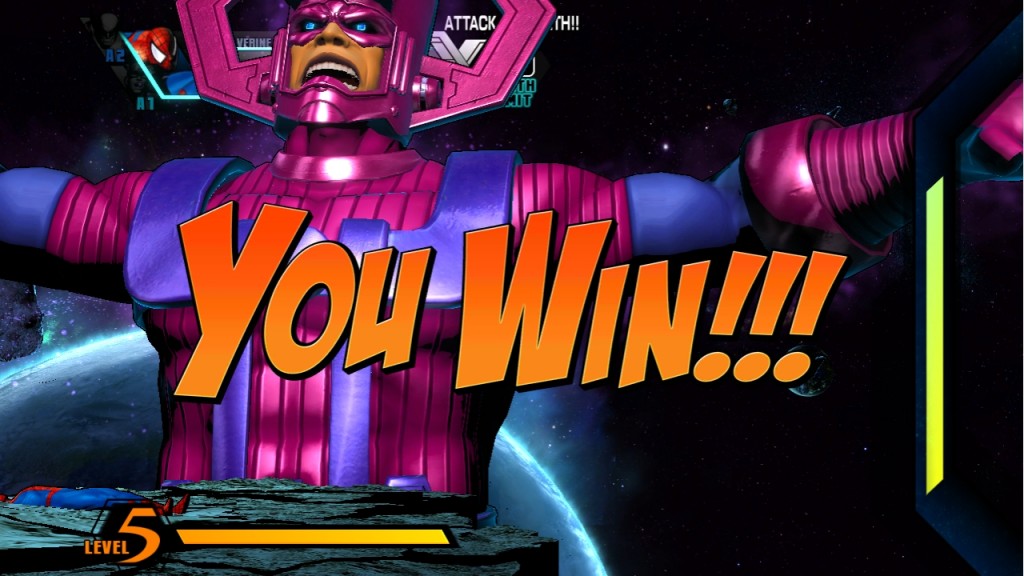 With the roster now boasting 48 characters, is Ultimate Marvel vs. Capcom 3 worth it to the casual/average gamer? It depends how much more you want to pay a game after it was released 9 months ago, how much of a fan you are of the characters, and ultimately if you want to master twelve new characters. For a hardcore, online player, it’s a new challenge to compete against others with these new characters, a plus if you can’t relinquish your controller in order to go out and socialize with real people. A casual Arcade mode player such as myself, who enjoys the story and endings, might not be so keen taking the time to do this, as it was hard enough playing most of the characters in the first place. Other than the characters, there are 8 new stages to compete in (some a redux of previous stages) and the long requested spectator mode. One interesting item of note is the ability to play as Galactus by holding a shoulder button + select (on the respective controllers for 360 and PS3). Still, with all this cool sounding visual caviar, Ultimate Marvel vs. Capcom 3, 9 months after its predecessors release, might be a little too much for cash strapped gamers this holiday season. Seek out only if you enjoy a good beat down, and want to see Ant-Man riding one of Hawkeye’s arrows.

– How much fighting can you actually stand?