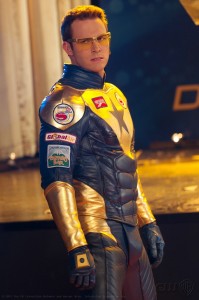 The story will center on Booster Gold, a washed-up athlete from the future who travels back to the present in hopes of becoming the greatest super hero of all time. Instead of chasing criminals, however, his main priority is chasing fame and money. But Booster Gold discovers that being a hero takes more than just a megawatt smile, and that the future doesn’t happen without first protecting the present.

Booster Gold has appeared on the small screen before as part of the cartoon series Justice League Unlimited and was most recently depicted in live-action during an episode of Smallville‘s final season.

BoosterGreg joins PB and Rob for a debate game show! We also chat about which fictional world we’d choose to live in and time travel stories we like.