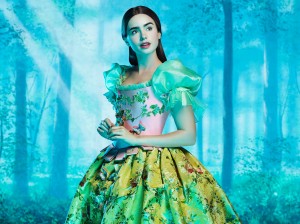 In the March 16 release, a wicked enchantress schemes and scrambles for control of a spirited orphan’s throne and the attention of a charming prince. When Snow White’s beauty wins the heart of the prince that she desperately pursues, the Queen banishes her to the forest, where a ravening man-eating beast hungrily awaits.

Rescued by a band of diminutive highway robbers, Snow White grows into an indomitable young woman determined to take back her realm from the treacherous Queen.