3 min read
Add comment
FacebookTwitterRedditPinterestEmail
The Wolfpack is back, but they should have quit while they were ahead. 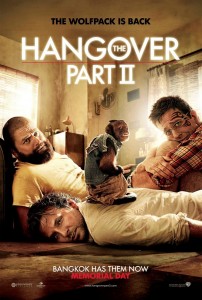 When first hearing about a sequel to The Hangover, I’m guessing your first thought was one of two things:

1) I loved The Hangover and can’t wait for a sequel!!

2) How are they going to make a sequel to The Hangover?

I fell a bit more into the second camp. While I enjoyed The Hangover, it wasn’t as spectacular to me as it seemed to be to other people. From a storyline perspective, there was really no justification to create a sequel, but the studios could easily justify it because they knew how much money it would bring in. The result is a sequel that shares the exact same formula as the first movie. One guy’s getting married… there’s a bachelor party… they wake up clueless as to what happened and start to put the pieces back together through a series of hilarious events. This time around there was a small tweak to the formula… they left out the humor. The Hangover: Part II felt like any Ben Stiller movie to me, in which I felt so bad for the characters involved in the story that I couldn’t find their situation comedic in any way. I may have let out one, maybe two laughs during the entire 102-minute snoozefest.

The reactions of characters to certain events are also completely unrealistic. I can’t imagine a human being on Earth that would be happy, or even just nonchalant, about losing a finger and not remembering how it happened. I know this is a comedy and there’s a certain amount of suspension of disbelief, but that only goes so far.

The Hangover: Part II tries so hard to take things from the first movie and make them work again. Yes, it was funny when Mike Tyson showed up in the first movie and sang In The Air Tonight. No, I don’t want seemingly random songs played throughout the movie for comedic effect… and no, having Mike Tyson show up to sing again doesn’t work either. In fact, it may have been the single worst movie cameo I’ve ever seen.

Lastly, and I’m cutting this review short because I don’t want to continue reliving scenes from this debacle any longer, when a movie has mystery elements of unraveling how events took place, don’t reveal the answers to those mysteries through a series of still images during the credits. Make them a part of the actual movie. To do otherwise is just lazy.

Bottom Line: The Wolfpack is back, but they should have quit while they were ahead.