3 min read
1 comment
FacebookTwitterRedditPinterestEmail
FOX has announced that Family Guy has been renewed for a tenth season and The Cleveland Show for a fourth season.

FOX has announced that Family Guy has been renewed for a tenth season and The Cleveland Show for a fourth season. Here is the full press release:

FOX has renewed ANIMATION DOMINATION favorites FAMILY GUY for a tenth season and THE CLEVELAND SHOW for a fourth season, it was announced today by Kevin Reilly, President of Entertainment, Fox Broadcasting Company.

“For nine seasons, our viewers have been cracked up, delighted, surprised and, at times, gloriously disturbed by the mind of Seth MacFarlane – and they keep coming back for more,” said Reilly. “The Griffins and the Browns have become cornerstones of our Sunday nights, and we can’t wait to find out what new adventures Seth, Mike and Rich cook up for them next season.” 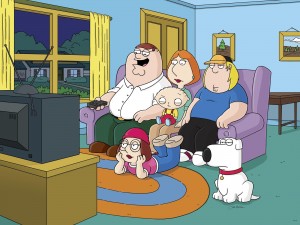 In the “Foreign Affairs” episode of FAMILY GUY, airing Sunday, May 15 (9:00-9:30 PM ET/PT) on FOX, BONNIE (guest voice Jennifer Tilly) and LOIS (Alex Borstein) plan a girls’ getaway to Paris, but while there, Bonnie crosses the line in the City of Love. Meanwhile, PETER (Seth MacFarlane) homeschools CHRIS (Seth Green) and MEG (Mila Kunis) using some unorthodox teaching methods. Then, in the “Episode VI: It’s a Trap” one-hour season finale episode of FAMILY GUY, airing Sunday, May 22 (9:00-10:00 PM ET/PT), the Griffins return to that galaxy far, far away as their freakin’ sweet saga continues with the final installment of the hilarious three-part “Star Wars” satire. The characters from around the Quahog universe reprise their intergalactic roles in an outrageous retelling of “Star Wars, Episode VI: Return of the Jedi.” Special guest voices on the episode include Anne Hathaway, Rush Limbaugh, Carrie Fisher and many others.

In the “Hot Cocoa Bang Bang” season finale episode of THE CLEVELAND SHOW, airing Sunday, May 15 (9:30-10:00 PM ET/PT), CLEVELAND (Mike Henry) takes the entire family to a comic convention in an attempt to sell his comic book, “Waderman.” While there, DONNA (Sanaa Lathan) is horrified to find out that Robert Rodriguez (guest-voicing as himself) is screening a Blaxploitation film that she starred in when she was younger, and CLEVELAND JR. (Kevin Michael Richardson), tired of Comic-Con being a playground for Hollywood to peddle their projects, gathers a band of geeks together to take the Con back to its true origins. The episode also features special guest voice appearances by Emily Deschanel (BONES), Eliza Dushku (“Dollhouse”), Danny Trejo (“Machete”) and Katee Sackhoff (“Battlestar Gallactica”).

THE CLEVELAND SHOW follows Cleveland Brown and his new life in Stoolbend, VA, with his high-school-sweetheart-turned-second-wife, Donna, and their three children: Roberta, Cleveland Jr. and Rallo. The animated series, which features the voice talents of Mike Henry, Kevin Michael Richardson, Sanaa Lathan, Reagan Gomez and Jason Sudeikis, is a 20th Century Fox Television Production. Seth MacFarlane, Mike Henry and Rich Appel are executive producers and co-creators of the series.