2 min read
Add comment
FacebookTwitterRedditPinterestEmail
To celebrate the re-release of Pearl Jam's 2nd and 3rd albums, the band is giving one lucky fan a chance to win an Epiphone Les Paul Custom guitar! 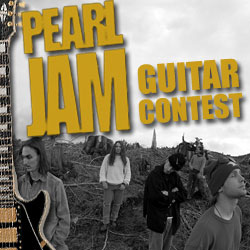 To celebrate the re-release of Pearl Jam‘s 2nd and 3rd albums (Vs. and Vitalogy), the band is giving one lucky fan a chance to win an Epiphone Les Paul Custom guitar!

For more information on how to enter, visit this link or click the contest logo on the right. (contest ends on May 30th)

Epic Records and Legacy Recordings will release newly restored and expanded deluxe editions of Vs. and Vitalogy, the second and third albums from Pearl Jam that broke all initial U.S. SoundScan records and secured the band’s reputation as a preeminent force in American music.

2011 will be a yearlong celebration of Pearl Jam’s rich twenty-year history. The anniversary festivities kicked off with the release of a new live compilation album, Live on Ten Legs, in January, followed by the March expanded reissues of Vs. and Vitalogy. Late summer brings a Pearl Jam 20th anniversary destination weekend bash followed by the fall release of Cameron Crowe’s film, Pearl Jam Twenty, along with an accompanying book and soundtrack album. Interspersed between these PJ20 highlights will be a number of additional special events and new, unexpected releases.

The newly expanded Legacy editions of Vs. and Vitalogy will each be available on CD, LP and digital formats on Monday, March 28th. Vs. and Vitalogy will also be available together, with bonus tracks, in a limited edition collector’s boxed set which will also include a gatefolded double vinyl LP and CD of Live at the Orpheum Theater, Boston, April 12, 1994 as well as an exclusive digital download of the entire concert.