I Am Number Four – movie review

3 min read
1 comment
FacebookTwitterRedditPinterestEmail
I Am Number Four bears a striking resemblance to something you might see on the CW, and that's just fine if you're into that sort of thing. 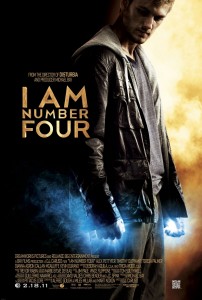 I Am Number Four is the story of nine human-like, alien beings who were sent to Earth from a dying planet so that they could fulfill a greater destiny. Each of them is numbered and being hunted down by another alien race, the Mogadorians. The enemy race has already succeeded in eliminating numbers one through three, so the character focused on here is John Smith (Pettyfer), aka Number Four. John has been forced to move from town to town his whole life to keep safe and is looked after by his also alien protector Henri (Olyphant). Just as John is learning that he’s next on the list, he starts to develop abilities, referred to as “legacies”.

The origin story here feels very similar to another super-powered, orphaned alien ::cough::Superman::cough::, but isn’t nearly as fleshed out. We know that these nine each have special legacies, which is their reason for being sent to Earth, but that’s really all we know. The Mogadorians seem to want to eliminate the nine because they’re a threat to their plan to dominate Earth, but it seems that they’re only interest in Earth is the nine themselves. The only explanation we’re given is that the Mogadorians are decimaters by nature, and nothing much else beyond that. If you’re willing to just accept the terms as they’re laid out, you’ll enjoy the movie much more.

Speaking of super-powered aliens and stories, the writers responsible for this screenplay are Alfred Gough and Miles Millar, the same writing team behind Smallville. I Am Number Four is based off of a book by the same name, but their writing style is clearly on display here. The movie feels much like a CW show brought to the big screen with much better special effects. Fortunately for me, I enjoy Smallville, so I ultimately enjoyed I Am Number Four.

As far as performances go, Alex Pettyfer is fine in the role of John Smith. As an actor that’s just starting to break out, I’m interested to see how well he’ll fair in something more challenging. Glee’s Dianna Agron brings a soft-spoken innocence to the role of Sarah, making for a perfect damsel in distress. The standouts for me were both Timothy Olyphant as Henri and Teresa Palmer as Number Six. Olyphant’s certainly no rookie to Hollywood, and his experience brings an appropriate confidence to his role. My only issue with the character of Henri is that for a skilled warrior, he doesn’t seem to do a lot of fighting. Australian native Teresa Palmer, on the other hand, does a LOT of fighting as the badass Number Six. She’s the only character in the movie who seems to have a clear purpose and mission.

Bottom Line: I Am Number Four bears a striking resemblance to something you might see on the CW, and that’s just fine if you’re into that sort of thing.