Guitar Hero franchise is no more 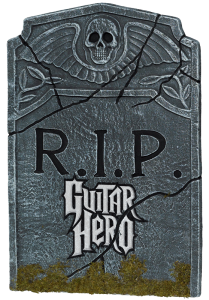 Activision/Blizzard announced today that the Guitar Hero franchise has come to an end.

According to the company’s financial statement, “Due to continued declines in the music genre, the company will disband Activision Publishing’s Guitar Hero business unit and discontinue development on its Guitar Hero game for 2011.”

Activision Publishing CEO Eric Hirshberg added some more insight into the company’s attention shift away from the music genre, explaining that even though DJ Hero 2 and Guitar Hero: Warriors of Rock were well-received, “demand for peripheral-based music games declined at a dramatic pace.” He continued, “Given the considerable licensing and manufacturing costs associated with this genre, we simply cannot make these games profitably based on current economics and demand.” However, Activision will continue to support its existing music games with DLC.