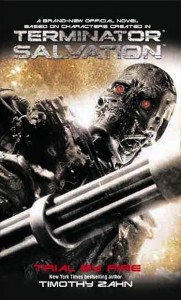 I work with a man that, as of today, is going into his 38th year of teaching English. He is a treat to enjoy lunch with because of the profound authorial quotes he brings up in relation to whatever the daily topic may be. Well, a few months ago I was discussing the amazing number of coincidences that brought me to the school which I now call home and he responded, “Kurt Vonnegut once said something along the lines of this, ‘ The only place where you will find superfluous coincidences are in bad literature and life.'” And I bring this up because beginning at page one of Trial by Fire, this quote wandered through the confines of my cerebral cortex.

Now, before you think this review is going to be a vicious slug fest on the face of Zahn’s novel (which it is), let me just say that writing fiction is HARD; and, writing good fiction is EVEN HARDER. It is so hard in fact that I, a teacher of AP Language and Composition, hardly ever touch it; I stick to my expository guns–which, by the way, are much more powerful than a million T-700 machine guns. So, I have to give credit to Zahn for producing a work of fiction and getting paid (much more than I’ll ever make) for it;  I am not sure I could do either.

Anyway, the problems with the literature derive from the over-dramatic character development, especially in relation to dialogue and the coincidence-laden plot.

In relation to the characters, they seem to always react to each other in ways that make you think they have ESP, and every look one gives to another is followed by an explanation of how Character A knows what Character B is thinking. The dialogue is unbelievable because the action tied to their speech is explained in the following line. Furthermore, the description that follows each line in the book seems boring and forced, so that doesn’t help make things much better either. Let me give you an example of what I mean: “‘How about we hear the whole story?’ Williams suggested. Her voice was carefully neutral, Barnes noted, but he could see his same suspicions lurking behind her eyes” (Zahn108). I’m just going to let that example speak for itself, and you can draw your own conclusions. When I took my fiction writing seminar in college, we were told not to over explain (e.g. don’t explain the symbolism in your story, let it identify itself) and that less is more; here I got a lot more and the effect produced way less in terms of literary value.

While reading, I felt that the characters in the text were about as interesting as watching grass grow–I still feel the same way–and this didn’t help the plot. But more so, the plot suffers, in terms of believability, because of all of the coincidences that take place. As I was reading, I continually wanted to scream, “YEAH, RIGHT!” at the top of my lungs and punch the characters square in their grubby little jaws; I’m not sure if that is the reaction Zahn was going for.

The last issue I have with the book as a whole is this: there isn’t much description of anything. But I have to admit, I may have been jaded while reading it because, in conjunction with reading this book, I was reading The Strange Case of Dr. Jekyll and Mr. Hyde and Frankenstein. Perhaps I just didn’t see the description because it isn’t as advanced as it is in the other works I just mentioned. But, truth be told, I could not picture Barnes, Kyle, or Williams, and the best I could come up with for the H-K was the helicopter from Batman: The Animated Series–you know, that round, kind-of-blimpy thing.

In all, I don’t really know Zahn’s audience, but I do know he is a New York Times best selling author, and that is more than I can boast to be. And perhaps there is a teen or geek somewhere who will really connect with and enjoy the piece because he or she has the schema needed to do so; but overall,  I’ll have to call this one of the many literary potato chips (they take up plenty of space but provide no nutritional value) out there; I don’t like potato chips.