Without a doubt the biggest and most awaited panel of all SDCC was the Marvel Films panel Saturday night.

Head of Marvel Studios Kevin Feige walked out onto the stage.

Asked if connecting the films is a good idea, the crowd cheered back at Feige.

After showing a teaser trailer of  Captain America: The First Avenger with a brief glimpse of actor Chris Evans in costume:

(mainly newsreels from WWII, with FDR narrative, and it ends with a profile shot of Chris Evans in full Cap costume… and ends with the shield flying at the audience)

Evans, Hugo Weaving and director Joe Johnston came out to talk about the film. Johnston referred to Raiders of the Lost Ark when asked about the tone of the film. Evans called the first few days of working, “a thrill.”

Hugo Weaving is asked about how he envisioned playing the Red Skull.

Another clip is shown:

An unmasked Red Skull looting a tomb in a castle, which belongs to Odin. There’s a nod to the Cosmic Cube, a staple of Cap comics. The Skull then finds a hidden compartment, finds a box inside and opens it. An old man warns the Skull that man was not meant to see what’s inside. “Exactly,” answers the Skull.

With that, the Cap crew walks off and Thor director Kenneth Branagh comes onstage. He says he wasn’t much of a comic book nerd growing up, but he loved Thor above all others.

He wanted to translate the grandeur of the comics and says the gods smiled on him with a fantastic cast, and then he introduces them…

Clip for Thor is shown:

Thor and Odin have a strained relationship, and the All-Father casts out his son to earth, hoping he learns to become worthy of his name, powers, and title. Sweeping shots of the Golden Realm of Asgard are shown, the Asgardians in battle gear, including Thor. Thor is seen being interrogated by the SHIELD Agent (from Iron Man and Iron Man 2), about who he is, and where he comes from, and where he learned his fighting techniques. At one point, Thor tells Jane Foster, who found him in the desert after Odin banished him… he tells her about his past and his powers… “your ancestors called it magic. You call it science. In my land, it’s one and the same.”

He then introduced Jeremy Renner as Hawkeye, and, making it official, Mark Ruffalo as Bruce Banner.

Finally, Downey welcomed director Joss Whedon onto the stage to the delight of the Hall H audience.

“I’ve had a dream all my life, and it was not this good,” said Whedon. “This cast is more than I could ever dream of working with, and I am going to blow it. I am very nervous and I need your love and I need your support.”

Whedon closed the panel by yelling, “See you soon!” 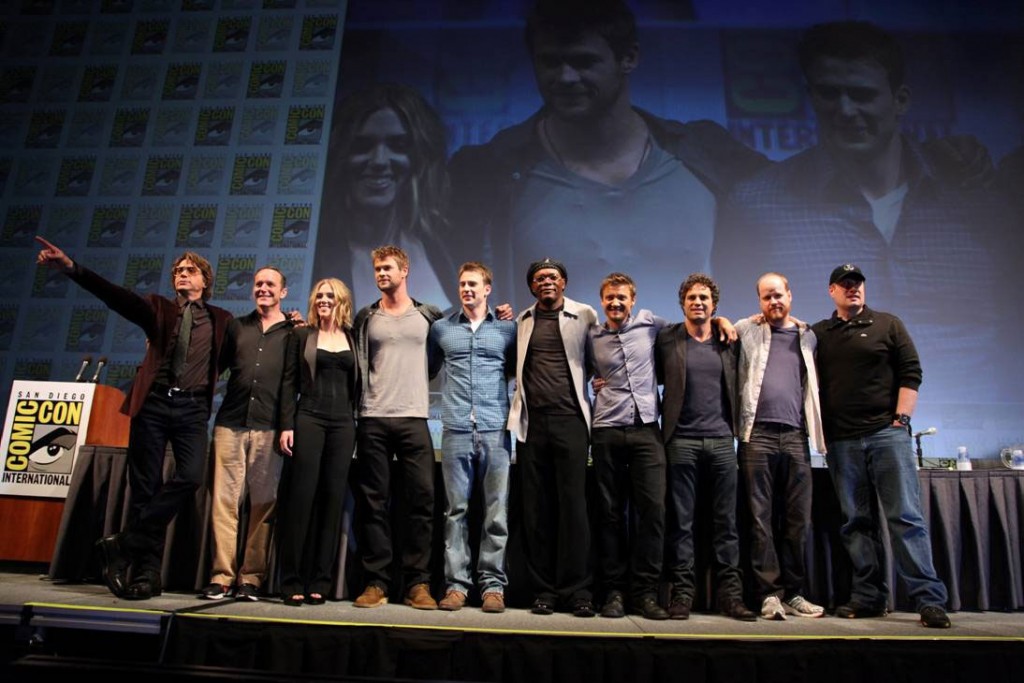 UPDATE: A fan posted this video on YouTube of the introduction of The Avengers.