In one of the most anticipated panels of SDCC, DC Comics and Warner Bros. held the Green Lantern movie panel.

-Geoff Johns came out to start. “I’m super, super excited, this is the first Green Lantern movie panel in history. Being on-set was one of the most exciting times of my life.”

-They then showed a teaser clip of the movie. Here is a brief description:

Footage starts out, a voice talks to us and welcomes us as “Inhabitants of Sector 2814” and tells us to focus on the green light on screen. As we do, the footage begins. You see Ryan Reynolds as Hal Jordan discovering Abin Sur’s crash site. You see the ring in his hand. It’s sizable, dark green, and looks semi-transparent. Reynolds swipes down three baddies with a huge green fist. Then there’s a brief shot of OA. The whole time, Reynolds’ voice is reciting the Green Lantern oath. 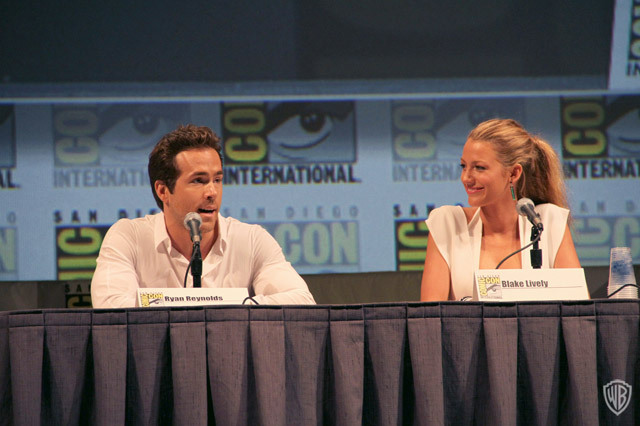 -Reynolds said he was attracted to the role because he gets to throw a punch, tell a joke, and kiss the girl. He’s hoping for 2 or 3 more movies. “I saw this guy who is arrogant and cocky in the film who is given this amazing gift, and that becomes humbling for him. I thought that was a great arc for a character in a superhero film.” Talking about flying, Reynolds says that all the Lanterns have their own way of flying, “We get to really spend up in the air and fly. We can bank and make right turns and do somersaults. The flight part has been one of the most fun parts of filling the Green Lantern shoes for me.”

-Director Martin Campbell is talking about the tone of the movie. It’s fun, there’s humor, the action is very real, and the relationship between the characters is real. Says about the costume: “The costume is always a work in progress. We have the black and green, and we lost the white gloves. We felt it looked cooler and far more interesting without them. There are certain lines on the costume, and it’s more like a skin on GL than a costume. The lines are all lines of musculature, which our designer came up with. It is a work in progress. It will eventually look incredibly cool.”

-Geoff Johns tells a story about how they tried to make a Green Lantern 10 years ago, and the first thing the studio exec asked was “Can we make the movie without the ring?” That’s when he thought there would never be a Green Lantern film.

-Someone asked Reynolds, “Your wife is a Marvel character… does that cause any strife?”  He responded with “Well, we probably have more comic books lying around then other married couples… although that might not be true for this crowd.”

-Blake Lively talks about “the best part of getting this job was getting to call my nephews to tell them I was going to be in a superhero movie. Or of course, Carol becomes a villain later, and I can’t wait to kick his butt.”

-They’re talking about including the Green Lantern Corps, and Geoff Johns said it’s an important part of Hal Jordan’s development as a Green Lantern, so they needed to include them.

-Someone asked if this could be the beginning of a shared universe in DC films. Geoff Johns replied, “There will be a lot of DC movies coming up soon, but I can’t talk about them.” Someone is asking if there could be a Justice League movie. Johns: “Anything is possible, but I think the Green Lantern movie will lead the charge for anything that comes later.”

-“Will we see Ion or Parallax in these films?” Reynolds, “Parallax is in it. I better be able to say that… he’s the emotional manifestation of fear in this.”

-The cutest kid in the world in a Green Lantern t-shirt gets up and asks Ryan Reynolds what it’s like to say the Lantern oath. Ryan obliges by telling him it’s awesome… then he does it for the entire room while brandishing his Green Lantern ring.