I’ll be covering the next 4 days of SDCC for you guys. I will be mostly gathering my news from multiple sources (all of which will be credited). Basically it will be handy done in one recap of each day instead of having to go to multiple places. (Note: I am not covering EVERY single panel as that would be insane. I am focusing on mostly comic related panels, but there is a lot more out there.) 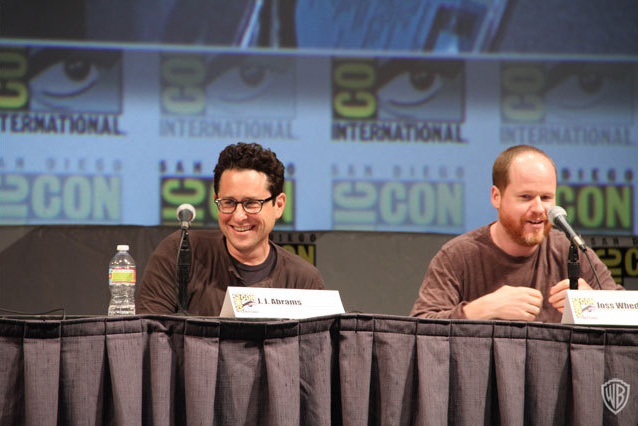 As Jeff Jensen (writer for Entertainment Weekly) announced the shows of Whedon and Abrams, the audience cheered in ever growing intensity. “It’s a really long resume,” joked Jensen as he read off the creators’ credits. “Yo!” said Abrams as he took his seat. Both creators thanked the audience for coming.

“Back in the day, on the WB, I was doing ‘Felicity’ and you were doing your spectacular shows,” said Abrams as he explained how he met Whedon before. The two also discussed the most extreme things they’ve done in the name of fandom.

Abrams said that as a kid he sent fan letters, but not to actors and directors, put to make up people. From one letter, he received the tongue from the Exorcist and a hand-written note. “There was a note that said put some peanut butter and stick it in [your mouth]. My mom was like, ‘What the fuck is that?’

“I do have an Alien egg, but I had to bury the franchise to get it,” joked Whedon.

The two discussed how they got into writing. Whedon talked about wanting to make money, so he started writing spec scripts. Abrams wanted to be a magician originally. Whedon asked if he thought magic nerds or comic nerds are more pathetic. Abrams said magic nerds.

Abrams talked about his comic experience. “I worked at a comic book store as a kid,” he said. “The first day on the job, the guy who owned the store, I don’t know what he was on, he gave me the keys and said, ‘I’ll see you tomorrow.’ I kind of wanted to steal some of the old Spidey books. I didn’t, but I probably should of.”

Whedon talked about his take on the Avengers. “It is a little early,” he said. “I am still writing an outline., I’m still in that stage of reworking and reworking. The thing that made me excited is that these people should not be in the same room, and that is the very definition of family.”

Abrams talked about his new film with Steve Spielberg, Super 8. “When I was 16 years old, Matt Reeves and I were at a Super 8 festival,” he said. “We got a call from Stephen Spielberg’s assistant.” They asked if the two were interested in repairing Spielberg’s old damaged reels. “Someone dropped off ‘Firelight’ and ‘Road to Nowhere,’ which are two movies he directed as a kid.” Abrams wanted to steal a frame. “There was a lot of theft in my childhood,” he joked. They received 300 for their work.

“It’s way too early.” “I would love to show you footage” but he hasn’t any yet. He said they start shooting in September. He also confirmed that Super 8 will not be in 3D.

“I’m totally into it,” Whedon said of the 3D craze. “I think it’s being done too much now that we’re past the pancake, poke things into the screen 3D. There are movies that shouldn’t be in 3D,” he said. He also said he doesn’t write with 3D in mind. “There’s no, ‘then the sharp thing comes at him,'” he joked.

Whedon mentioned his horror movie Cabin in the Woods won’t be in 3D, but joked it as a selling point. “We’re hoping we can advertise it in 2D. You will believe things can move across the screen—’Cabin in the Woods.'” Whedon said he doesn’t believe 3D will take over completely.

Whedon then talked about “Dr. Horrible” and whether the internet is a viable means of creator expression. “Gosh I hope so,” he said in doing more internet stuff. “After Dr. Horrible, I sort of waited for everyone else to show up to the party.” He said it made money for him but also the writers and actors. “It really worked as a model for how people can make a profit off the internet.” He added that he hoped people would see it and get on it, but the studios views were “extraordinary old-fashioned.” He also said they wanted to create a sequel, but scheduling conflicts came in. “I was just on the cusp and this was something I never mentioned in public, but I started to work on a piece with Warren Ellis called ‘Wastelanders.'” But Ellis said he’d wait now that Whedon is working on the Avengers.

Whedon and everyone else involved really want to do a Doctor Horrible sequel but it’s all about time and getting everyone moving. “”It’s in turn around,” he said, “at the studio of me.” He said everyone wants to, but it’s a matter of time. “We know what the movie is and we want to do it, but we want to do it on our own terms.”

Jensen talked about their studios Bad Robot and Mutant Enemy. “Should they fight?” asked Whedon. “Or should they kiss?” Both Abrams and Whedon discussed the possibility of their own channel with just their stuff on it. Both seemed to like it, but Whedon mentioned the amount of time it would take to do something like that.

Whedon talked about television and how “Dollhouse” was recently canceled. “That question sounds like, ‘Are you proud of what you did? Maybe you should sit in a corner and think about it.'” Whedon said he was trying to fit a square peg into a round hole. “My experiences at Fox has not been successful and ultimately there’s a certain level of incapability that’s very hard to mess.” He said he has a more cable mentality. “What I learned was know your audience and your first audience is the people paying you to make the thing.” He said being at Marvel makes him very happy because everyone knows what they want and work on making it happen. “I love television. I love serialized storytelling, but I didn’t quite think that one through.”

Abrams talked about serialized storytelling. “They want shows they can repeat. The studios want shows they can syndicate.” Abrams said he enjoys shows were you can invest in the characters and have a through-line. “When they talk about stories, stories imply time. Stories imply inevitability and progress.” He said he’s drawn to that.

Whedon said that studios generally speak against serialized storytelling. Even when Lost was one he said they didn’t want something like that, even though it won so many enemies. “I’m still angry about ‘Empire Strikes Back.’ That movie doesn’t have an ending. It doesn’t. He’s frozen in carbonite.”

Jensen asked if they get inspired by any other creators or things they’ve seen. “I love Edgar Wright,” said Abrams. “I just saw Scott Pilgrim” and “I loved it.” Abrams also said the loves the work of Chris Ware. “There are a lot of people. I could go on with a huge list.”

“Making the Avengers, that’s cool,” laughed Whedon. “I’m also watching a lot of stuff looking for moods.” He said that he did have a moment of “sheer fucking panic” because Star Trek is so good. “This is the gold standard for a summer movie, for a team movie, for any movie that has come out,” he enthused. “And it makes me throw up in fear.”

Questions then opened up to the audience.

A young audience member asked whether they enjoy film or television more. “I don’t think there’s a better,” said Whedon. “What you can do in a movie is so extraordinary and fulfilling and you get to be done. But being able to spin a story over seven years or eleven episodes even if they’re out of order is still great. That’s a different kind of fulfillment.”

Whedon talked about his dialogue, which is a signature of his work said Jensen. “That’s just people talking. I don’t write second drafts really. I don’t put anything down until it’s right.”

Later, a fan asked about the ending of “Lost” and if it was everything he wanted. “First of all, Damon Lindeloff and Carlton Cruse ran the show for six seasons. It was an amazing thing when we first started… we wrote this bible of what it was going to be. A lot of those things ended up being in the series, a lot did not.” He said that planning out everything episode to episode from the start to finish is a disservice because you cannot anticipate certain things. He mentioned Michael Emerson and his character of Ben Linus, who originally was only to appear for a few episodes. “You don’t realize ‘Ben is critical to this story,'” he said if you were to just plow through with a cemented plan.

A fan asked about the different voices of the characters in Avengers and making sure they’re all unique. “A lot of the way I speak and write comes from reading these comics,” he said. “it’s very easy to fall into the aesthetic of something you love.” He said he wants to bring some of his own style and voice, but keep it true to the source material. “That doesn’t really seem like a challenge to me. When I write Tony Stark or Steve Rogers or any of these people, they sound like them.”

A fan asked the creators their opinion on film school—whether they should invest the time and money into one or go your own way. “Go your own way,” said Abrams.

“Do film school,” followed up Whedon without missing a beat jokingly. He went on to talk about his experiences and why he enjoyed going to film school.

The final question regarded whether when it comes to writing advice if critical advice is better or no advice. “What’s more fun than getting notes. It’s really the joy for a writer,” said Whedon. “You have to walk a razor’s edge.” “You categorically will have to listen to people” and have to “listen to people who don’t know a damn thing but have a pocket full of gold.” “If you feel confident about the story, then you should be able to withstand what other people think and incorporate what other people think.”