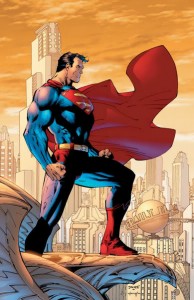 Here are the news items:

-Each writer talked a little about their title they are writing currently.

-JMS (J. Michael Straczynski) discussed his current “Superman” arc “Grounded.” “After seeing so many stories where he was out doing great things, I really thought it was important to bring this guy down to Earth—literally,” said the writer. “This is a guy who started in his original iteration as the hero of the every man. Let me bring him back to personal stories, to character stories and send him walking around the country.”In regards to the upcoming cover of the title featuring a child with a black eye, the writer said that “There’s going to be family situations along the way. This is me at 12 by the way—Superman t-shirt and a black eye.” “We want to deal with issues like child abuse. Things that have relevance today and aren’t easy to resolve.” He said that you can’t punch your way out of every problem. “I want to explore personal stories throughout the book.”

“I want to do more with Lois,” added Straczynski. “Particularly because very few of the writers who worked on him haven’t been reporters. When you walk into the Daily Planet it doesn’t feel like an actual news office.” The writer said he really wants to write the character like a real reporter and have her chasing after stories. Davis then added that he “drew her as the dominating, cute girl that you’re afraid to talk to. You’re shaking in your boots. But in a good way.”

-A cover to “Action Comics” came on the screen and Paul Cornell discussed the image. “This is Gorilla Grodd attacking Lex Luthor with his No. 1 attacking spoon,” joked Cornell. He decided “Action Comics” with Lex Luthor as a “Super-villain punch up. It’s Lex Luthor versus one of the DC Universe’s biggest villains every month.” The writer listed upcoming character appearances, including Mr. Mind, Deathstroke, Gorilla Grodd, and Neil Gaiman’s Death—who the writer said isn’t a super villain but “the personification of a natural force that’s actually very lovely.” He also said a crossover with the Secret Six will be forthcoming.

– Jeff Lemire talked about the upcoming launch of the new “Superboy” ongoing. “Anyone who’s read my past work knows I love telling stories about rural community and small towns and I love super heroes. So, this is the perfect fit for me,” he said. He revealed that while Smallville is the setting, he likes bringing other DCU Characters to the small town—especially the Phantom Stranger. Lemire said that the character “may be an odd fit for Superboy.” Issue #3 also features a Superboy and Kid Flash reunion. He then talked about the supporting cast of Superboy established in “Adventure Comics.” The writer said that he does plan on using those characters and show how they play a role in Superboy’s life in Smallville. “The place itself is a big part, but also the community of Smallville is a big part of his life,” said Lemire. “Pete Ross is in it. He’s teaching at Smallville High now.”

-“Supergirl,” writer Sterling Gates said that “Bizarro Girl has just come to Metropolis and Supergirl and she have a pretty massive fight and then we go to Bizzarro World. It’s not a nice place. Supergirl will grapple with some of the issues she’s having coming out of the War of the Supermen.” The writer added “It’s Supergirl fighting her dark, twisted, mirrored self.

-JMS then talked about his upcoming graphic novel “Superman: Earth One. “What I came to as a story was, if you will, there’s this notion that as soon as you get powers you put on a costume for good or evil and go out and do stuff,” he said. “He could be anything he wants. He can be a scientist or a baseball player.” The writer revealed that he shows Clark Kent going to tryouts for baseball and football and gets a bid from everyone because of his skills. But when he goes to the Daily Planet, they’re not impressed by him.”[They say,] ‘Personally I’ve seen some of your articles and it feels like you’re holding something back. A reporter can’t hold anything back.'” Straczynski also reaffirmed his stance of Jimmy Olsen—Jim Olsen in Earth One—and how his experience with journalist photographers, show that they put themselves in danger for the perfect shot. Things change for Clark when “A massive, Earth shattering problem comes up and only he can solve the problem by revealing himself.”

-Many initial questions came in regards to Straczynski’s current arc on “Superman.” The writer talked about his decision to send Superman around the US and revealed an upcoming confrontation between Batman and the Man of Steel. The writer says that the Dark Knight believes Superman is having “a mental breakdown.”

-Later a fan proposed that since Superman is known as “the ultimate immigrant” what would happen when he reaches Arizona. “I actually deal with this,” laughed Straczynski. “I have a little fun with it.”

-Another fan asked about whether Lex Luthor will get to battle Superman at the end of his journey. “One of the things I really love about this story is that we really leave Lex changed by it,” said Cornell. “It’s not a circular story. He does not end up as he started.”