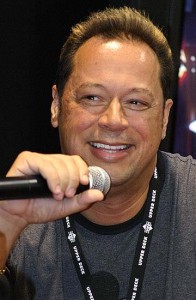 Marvel Entertainment, LLC announced last week that it has promoted Joe Quesada to Chief Creative Officer of Marvel Entertainment. In this new role, Quesada will work alongside Alan Fine, Executive Vice President, Office of the President and Chairman of Marvel Studios’ Creative Committee, to ensure that all portrayals of Marvel’s characters and storytelling remain true to the essence of Marvel’s rich history. Additionally, Quesada will provide creative oversight of all areas of Marvel’s business including theatrical, television, publishing, animation and games, while also actively participating in all story and script development for Marvel’s films and animation. Prior to this promotion, Quesada held the role of Chief Creative Officer & Editor-In-Chief, Marvel Animation & Publishing and oversaw the creative aspects of Marvel Comics and Marvel Animation.

“I am honored to take this new position at Marvel Entertainment and work with Alan to bring the rich history of Marvel to a brand new audience” said Quesada. “Together with the incredible talent here at Marvel, in all our divisions, I look forward to making Marvel an even bigger part of the entertainment industry and showing why we’ve been an industry leader for over 70 years.”