Back to the Future trilogy finally coming to Blu-ray

9 min read
Add comment
FacebookTwitterRedditPinterestEmail
Universal Studios Home Entertainment has announced that the "Back to the Future" 25th Anniversary Trilogy is hitting Blu-ray and DVD on October 26. 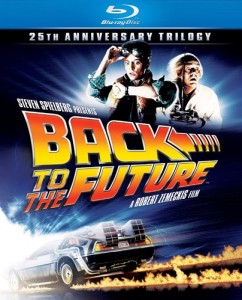 Universal Studios Home Entertainment has announced that the Back to the Future 25th Anniversary Trilogy is hitting Blu-ray and DVD on October 26. The newly restored movies will feature more than two hours of new bonus features. The full announcement:

At 88 miles per hour, Michael J. Fox and Christopher Lloyd took millions of spellbound viewers on a high-flying voyage across the space-time continuum in a trio of wildly inventive tales that broke box-office records around the world. To celebrate the 25th anniversary of the Academy Award®-winning cinematic franchise that generated nearly one billion dollars worldwide, the Back to the Future 25th Anniversary Trilogy will debut on Blu-ray™ on October 26, 2010 from Universal Studios Home Entertainment. The 25th Anniversary Trilogy will also be available on DVD.

Now, for the first time ever, the past, present and future collide in eye-popping high definition for a time-traveling celebration featuring new 25th Anniversary restorations for perfect picture and the purest digital sound. More than two hours of all new bonus features have been added, including an all-new, six-part retrospective documentary featuring never-before-seen interviews with the cast, crew and filmmakers, including Michael J. Fox, for the definitive Back to the Future experience.

BONUS FEATURES EXCLUSIVE TO Blu-ray™: Unleash the power of your HDTV with perfect picture and the purest digital sound available.

* U-CONTROL: Universal’s exclusive signature feature allows viewers to learn more about their favorite film without ever leaving the movie.
o Setups & Payoffs: As you watch each of the three films, each “set up” showcases items in the scene that prepare you for a future plot point. When you get to that moment in the film, the “payoff” is shown to complete the correlation.
o Storyboard Comparison: Compare key scenes in the movie with the original storyboards.
o Trivia Track: Get inside trivia and facts while you watch the movies.
* BD-LIVE™: Access the BD-Live™ Center through your Internet-connected player to get even more content, watch the latest trailers and more!
* My Scenes: Bookmark your favorite scenes from the movies.
* pocket BLU™: USHE’s groundbreaking pocket BLU app uses iPhone®, iPod® touch, iPad®, Blackberry®, Android™, Windows and Macintosh computers and more to work seamlessly with a network-connected Blu-ray™ player and offers advanced features such as:
o Advanced Remote Control: A sleek, elegant new way to operate your Blu-ray™ player. Users can navigate through menus, playback and BD-Live™ functions with ease.
o Video Timeline: Users can easily bring up the video timeline, allowing them to instantly access any point in their favorite episode.
o Mobile-To-Go: Users can unlock a selection of bonus content with their Blu-ray™ discs to save to their device or to stream from anywhere there’s a Wi-Fi network, enabling them to enjoy exclusive content on the go, anytime, anywhere.
o Browse Titles: Users will have access to a complete list of pocket BLU™-enabled titles available and coming to Blu-ray™. They can view free previews and see what additional content is available to unlock on their device.
o Keyboard: Enter data into a Blu-ray™ player with your device’s easy and intuitive keyboard.
* Archival Featurette Back to the Future Night: Hosted by Leslie Nielson, this original 30-minute special aired on NBC prior to the first television screening of the Back to the Future.

* Tales from the Future: New six-part retrospective documentary featuring interviews with Michael J. Fox, Christopher Lloyd, Lea Thompson, Director Robert Zemeckis, Producers Bob Gale and Neil Canton, plus Executive Producer Steven Spielberg.*
o In the Beginning . . .: Delve into the genesis of the project, casting, re-casting, the DeLorean, sets and overall pre-production.
o Time to Go: Production stories through the release of the first film.
o Keeping Time: The score and the songs of the Back to the Future Trilogy.
o Time Flies: Learn more about how the sequel came about, the futuristic look, the special and visual effects, recreating 1955 and more.
o Third Time’s the Charm: Learn about building a western town, Doc Brown’s love story, the casting of Mary Steenburgen, the train sequence and completing the Trilogy.
o The Test of Time: Back to the Future becomes a phenomenon! President Reagan quotes the film, the Back to the Future ride opens at Universal Studios theme park and fans rebuild the iconic DeLorean. The film’s cast and crew take a look back and discuss why these beloved movies live on.
* The Physics of Back To The Future: A discussion with celebrity best-selling author and physicist Dr. Michio Kaku about the overall appreciation of the science in the Back to the Future Trilogy*
* Nuclear Test Site Ending Storyboard Sequence: Storyboard sequence of the original proposed ending of the film.*
* 16 Deleted Scenes
* Michael J. Fox Q&A
* Q&A Commentaries with Director Robert Zemeckis and Producer Bob Gale
* Feature Commentaries with Producers Bob Gale and Neil Canton
* Archival Featurettes
o Making the Trilogy: Chapters One, Two & Three: Original 2002 DVD documentary that takes a look back in time.
o The Making Of Back to the Future Part I, II & III: Provides a vintage and historic first look at the making of all three films.
o The Secrets of the Back to the Future Trilogy: a televised special hosted by Kirk Cameron addressing fans unanswered Back to the Future questions.
* Behind-the-Scenes
o Outtakes
o Original Makeup Tests
o Production Design
o Storyboarding
o Designing the DeLorean
o Designing Time Travel
o Hoverboard Test
o Designing Hill Valley
o Designing the Campaign
* Back to the Future: The Ride
* Music Videos:
o Huey Lewis and the News “Power of Love”
o ZZ Top “DoubleBack”
* Photo Galleries, Including Production Art, Additional Storyboards, Photographs, Marketing Materials and Character Portraits
* Theatrical Trailers

Back to the Future

From the Academy Award®-winning filmmakers Steven Spielberg and Robert Zemeckis comes Back to the Future, the original, groundbreaking adventure that sparked one of the most successful trilogies in Hollywood history. When teenager Marty McFly (Michael J. Fox) is blasted to 1955 in the DeLorean time machine created by the eccentric Doc Brown (Christopher Lloyd), he finds himself mixed up in a time-shattering chain reaction that could vaporize his future—and leave him trapped in the past. Powered by innovative special effects, unforgettable songs and non-stop action, Back to the Future is an unrivaled adventure that stands the test of time.

Back to the Future Part II

Getting back was only the beginning as the most spectacular time-travel adventure ever continues in Back to the Future Part II—the sequel that proves that lightning can strike twice! Picking up precisely where they left off, Marty and Doc (Michael J. Fox and Christopher Lloyd) launch themselves to the year 2015 to fine-tune the future and inadvertently disrupt the space-time continuum. Now, their only chance to fix the present is by going back to 1955 again before it’s too late. From Academy Award®-winning filmmakers Steven Spielberg and Robert Zemeckis, Back to the Future Part II provides more of the timeless excitement that made Back to the Future an unforgettable adventure.

Back to the Future Part III

They’ve saved the biggest trip for last as the most popular time-traveling movie trilogy ever comes to a rousing conclusion in Back to the Future Part III. Stranded in 1955 after a freak accident, Marty McFly (Michael J. Fox) discovers he must travel back to 1885 to rescue Doc Brown (Christopher Lloyd) before he becomes smitten with schoolteacher Clara Clayton (Mary Steenburgen). Now, it’s up to Marty to keep Doc out of trouble, get the DeLorean running, and put the past, present and future on track so they can all get back to where—and when—they belong. From the Academy Award®-winning filmmakers Steven Spielberg and Robert Zemeckis, Back to the Future Part III is a spectacular grand finale to the unforgettable blockbuster series.