1 min read
Add comment
FacebookTwitterRedditPinterestEmail
Actor Dennis Hopper died on Saturday at the age of 74 from complications of prostate cancer. 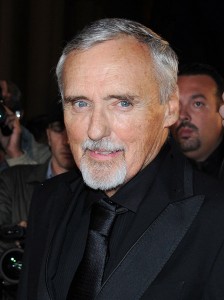 Actor Dennis Hopper died on Saturday at the age of 74 from complications of prostate cancer, his family said. He passed away at his home in the Los Angeles suburb of Venice at 8:15 a.m. PDT, surrounded by family and friends.

In a career spanning more than 50 years, Hopper received two Oscar nominations for co-writing Easy Rider (which he also directed and starred in) and for starring in the 1986 drama Hoosiers.

Hopper co-starred alongside his mentor James Dean in Rebel Without a Cause and Giant in the 1950s and starred in such films as Apocalypse Now, Blue Velvet and Speed.

Hopper fell ill last September. He continued working almost to the very end, both on his cable TV series Crash and on a book showcasing his photography. But his final months were also consumed by a bitter divorce battle with his fifth wife, Victoria Duffy.

In March, Hopper was honored with a star on Hollywood’s Walk of Fame.

Hopper is survived by four children.

Katie hadn't seen Speed, but now she has. Hear her thoughts in this episode.