3 min read
Add comment
FacebookTwitterRedditPinterestEmail
'The Objective' has a theme that is haunting; the anxiety the only present day super power has is not a fear of another super power, but of the unknown. 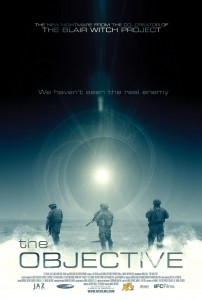 The Objective is a low budget Twilight Zone/Bermuda Triangle themed movie. Directed and written by Daniel Myrick, The Objective is set in Afghanistan where CIA agent Benjamin Keynes requests the help of a US special ops team to escort him into the remote mountains of Afghanistan in order to find a cleric by the name of Mohammad Aban. The team picks up a local translator to help with their navigation and dialogue with the people of the region. As the team moves in and out of Afghan villages, a narration is done by main character Agent Keynes who fills us in that this mission is more than finding a specific cleric. It doesn’t remain hidden from the team for long that the CIA sent Agent Keynes here to investigate an unknown heat signal picked up by satellite in the remote mountain region. The US military had great concern this was quite possibly a secret base for Taliban weapons, even a nuclear bomb. But the real confusion comes in the form of paranormal activity the further these men travel into the mountains. Strange lights, shadows, sand filled canteens, and even valleys that are not supposed to be there come to the attention of the now paranoid and confused soldiers.

The Objective made me realize how much I missed the show The X-files. I only wish this movie had a higher budget, and a few better actors, be patient with that aspect. They seemed to also have done their military homework for a movie, but Brian will check to see the validity of that (smiles); in other words it seemed like they had actual military personnel on set to help with procedure accuracy as much as possible. I think the movie could have been scarier and the low budget attributed to this. It’s always hard to make an effect scary when it looks like something done for a B-rated Sci-Fi channel movie.

Special Effects and military accuracy aside, the movie brings to light a parallel sense of symbolism. It was the topic of the actual war in Afghanistan, and the fact that what we’re up against has many attributes that are unknown. The land, the history, the number of enemies, what it takes to endure, and the psychological stress it all brings down on soldiers stationed there. Now, I don’t think it was deliberately forced to be a strong political movie, but what I do mean to say is this movie in some way or another gave attention to the chaos of this region. There are many mysteries to this land that stretch back to the times of Alexander the Great and through the British Empire; I love the connection between the actual event of the “Hill of Bones” and this movie (look it up on Wiki). The Objective has a theme that is haunting; the anxiety the only present day super power has is not a fear of another super power, but of the unknown.