Clash of the Titans – review

2 min read
1 comment
FacebookTwitterRedditPinterestEmail
Clash of the Titans is a non-stop action fest. While visually impressive, the character development leaves much to be desired. 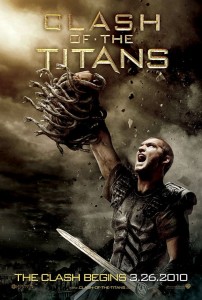 I walked into Clash of the Titans having only seen bits and pieces of the original classic version, but being more or less familiar with the overall plot. Perseus (Worthington), the son of Zeus (Neeson) and a human mother (therefore a demi-god), is charged with the quest of saving the city of Argos from the wrath of the gods. His main motivation is to exact revenge on Hades (Fiennes) for the death of his family. As the story progresses, we learn that Hades has the ulterior motive of dethroning his brother Zeus and seizing Olympus for himself.

Congratulations…you’ve just seen Clash of the Titans…the modern version that is. You can thank me later for saving you the time. There are, however, some noticeable differences between the classic version and the modern version, namely the relationship between Perseus and Andromeda.

Aside from the plot summary listed above, there isn’t much substance to the modern version of Clash of the Titans. While visually impressive, the movie feels like a chain of action sequences tied together by a delicate string. At times the action feels a bit misplaced, namely the battle with the giant scorpions. Aside from Perseus, there is very little character development. Although, even he seems to be very non-reactive to the news that his father is the king of the gods. While the film attempts to help you care about Perseus’s crew, you’ll find yourself caring very little when they meet their untimely demises.

While I’m on the subject, I’m curious as to why they would remake a “classic” like Clash of the Titans. Usually in film, referring to something as a “classic” is placing it into a category in which you couldn’t possibly do better. Sure, the special effects have reached a level where a remake would be much more visibly believable…and don’t get me wrong, it is. The problem is that in doing so, it loses a piece of its charm. While the old-fashioned stop motion technique is now a bit dated, it certainly succeeded during the time it was used.

Bottom Line: Clash of the Titans is a non-stop action fest. While visually impressive, the character development leaves much to be desired.