2 min read
Add comment
FacebookTwitterRedditPinterestEmail
The new 26-episode season of Futurama (including the original voice cast) will debut in June. 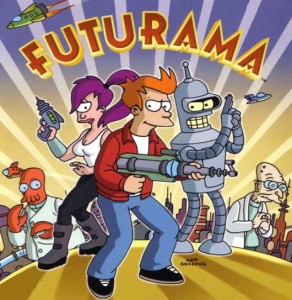 Over 20 years ago, Fox made prime-time animation relevant again with The Simpsons. Fox’s strategy has long been to team the first family of Springfield with additional animated shows. King of the Hill proved to be a capable running mate for 13 seasons, and in recent years Seth MacFarlane’s one-man animation empire has been riding shotgun.

It seems incongruous that today, pop culture ephemera like Family Guy stands shoulder-to-shoulder with a pair of broadcast progeny while a cultural touchstone like The Simpsons slumps in its 8 o’clock time-slot like a spinster aunt.

Those of us who like our animated shows filled with absurd humor grounded in something other than randomly-generated pop culture references remember that other Matt Groening series – Futurama – which once upon a time was also part of the Sunday night lineup. The show ran from 1999 until it was canceled in 2003, and after cancellation it continued to draw viewers on Cartoon Network and Comedy Central. In 2008, Comedy Central commissioned 4 Direct-to-DVD movies that did well enough for the cable network to pick up the show.

Comedy Central Insider reports that the new 26-episode season of Futurama (including the original voice cast) will debut in June. The movies were a bit of a mixed bag, but I’m cautiously optimistic that the show can return to the spirit and humor that made it great during its initial run.