5 min read
Add comment
FacebookTwitterRedditPinterestEmail
"Heavy Rain”, a game developed by Quantic Dream, is a tale that follows the adventures of four characters in search of the Origami Killer. 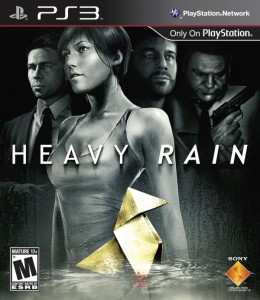 A startling gaze into the lives of those willing to do anything for love.

Every once and awhile a game comes along that makes me take a serious look into what I define as entertainment. Heavy Rain, a game developed by Quantic Dream, is a tale that follows the adventures of four characters in search of the Origami Killer. Everyone is searching for the Origami Killer for different reasons, though they are all equally dedicated to solving this complex and engaging mystery. The game takes place in a fictional east coast town known for its high precipitation, and somewhat sleazy atmosphere. Heavy Rain is classified as an interactive drama, and there is not a better classification that I have heard anyone come up with. It’s a huge stepping stone for this genre, and I hope to see more come from its success.

Instead of going into detail about the plot (and potentially spoiling this masterpiece), I want to explore the reason as to why this game works as well as it does. You start the game as Ethan Mars, a happily married father of two who works as an architect. You quickly find out that this is not your usual game. All actions are executed by correctly hitting the correct button that flashes up on the screen. This can be a bit tricky at times, especially if you are a Microsoft fan (as my roommate found out quickly). However, this can be remedied by changing the difficulty, which is not traditionally something you see in adventure games such as this.

The graphics are breathtaking throughout the entire game. I had difficulties at times actually progressing because I would get stuck exploring the many varied environments. Everything from the home of Ethan Mars, to a hopping techno bar, to an abandoned apartment in a shady section of town; it all came to life. There are times when this game feels very voyeuristic, peering into the lives of these characters at some of their lowest and most desperate moments. I have never experienced a game where I felt like I knew and cared for the characters more while putting in less than 10 hours to the game overall. I have gotten attached to characters before, but in Heavy Rain, it is much more than that.

One of my favorite components of Heavy Rain, and truly what makes it work most for me, is the fact that there are twenty-two unique endings to this game. I played through the entire game in probably about 7 hours; however, there are certain things that I did that in the long run shortened the experience. As heavy as the character development in Heavy Rain is, there is the option (or consequence), that certain decisions may lead to the demise of a character (or more) throughout the game. Once a character is dead, you simply do not play their scenes throughout the rest of the game, and outcomes then change without their involvement.

It is a rarity that I find myself wanting to play through a game a second time directly after beating it; Heavy Rain makes me want to sit through and get all twenty-two endings. I am curious really as to how much can and will change based on my decisions, though from the way that my first play through went, I think there is much to be done differently. I will say that I lost a character about halfway through the game, and the impact of that was largely noticeable.

One more thing I want to touch on is the saving feature. This game auto saves like crazy, and thus, anything that is done is done. As in, when something major to the way the plot progresses is completed, there is no going back. This makes the game very engaging, as you are not riddled with trying to get past a certain point. If you cannot complete a task that is given to you, you go on through the game living with the consequences of not completing said task.

In an industry that seems to be ruled by so many factors other than a compelling story, Heavy Rain is more than just a video game. If it continues to do as well as it has been, we can all hope to see more of the interactive drama genre come to fruition. Another promising attribute to games like this is the highly likely addition of quality DLC to the mix. I’m looking forward to seeing what they have to offer when the time for DLC comes.

Heavy Rain by all accounts should not be a popular game, but it surpasses all the hype surrounding it and delivers an amazing experience. In it’s “choose your own adventure” of murder, mystery, and intrigue, you truly do feel as though you are not playing a game, but living in this haunting world.