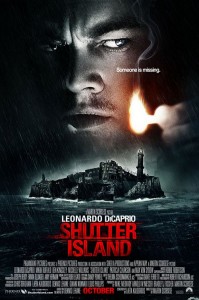 Beginning with Kundun and concluding with The Departed, Martin Scorsese waged a decade-long campaign of film making that relentlessly conveyed the same message over and over again: “Please, for the love of God, will someone just give me an Oscar already?!” With his appetite for Academy recognition presumably assuaged by the success of The Departed, Scorsese waited another four years to helm another feature film.

Shutter Island isn’t obvious Oscar bait the way films like Gangs of New York and The Aviator were, nor does it have the look and feel of a quintessential Scorsese movie like Mean Streets, Raging Bull, or Goodfellas. If the movie can be said to have a clear Scorsese signature, it is the presence of star Leonardo DiCaprio, who has replaced DeNiro as Scorsese’s latter-day muse. Starting with Gangs of New York, Scorsese has done everything to transform the pretty-boy matinee idol from Titanic into a raw, explosive screen presence, and DiCaprio has matched him every step of the way. He is on-screen throughout the movie’s two-and-a-half hour running time, so the burden of carrying the film truly lies with the star.

The film doesn’t waste any time throwing you into the heart of the film’s mystery. It begins on a boat in Boston Harbor, with DiCaprio and his new partner (Mark Ruffalo) on their way to investigate a patient’s escape from the insane asylum located on the eponymous island. From the moment they set foot on the island, it is clear that the danger is greater and the practices more idiosyncratic than other mental health facilities. DiCaprio grills doctors, nurses, orderlies, and patients – all the time certain that the whole truth is being kept from him.

DiCaprio is more than just another post-World War II gumshoe.   Flashbacks to his experiences liberating Dachau and dreams of his late wife give insight into the factors that shaped the relentless sense of justice that drives him. As the story unfolds, DiCaprio reveals more personal motivations for his interest in the investigation, suggesting that the island conceals a hidden agenda.

The movie treads the “nothing is what it seems” trail throughout. While the previews implied a supernatural explanation that never manifests, the movie does deliver a series of dream sequences and hallucinations that amp up the chills. Fortunately, as twisty as the movie becomes at times, the overarching investigation gives the audience a pretty strong through line to hold onto, so no one should get lost following the story.

Like a lot of movies in the post-Shyamalan era, Shutter Island relies on a big twist at the end. I won’t say the twist is a total shocker, and if you go in to the movie looking for a twist, it’s probably one you’d consider. I’d have to go back to see this movie again (and I probably won’t) to see if the twist really works or not, but when it drops at the end, I didn’t feel like it betrayed anything that went before.

As a craftsman, Scorsese is still able to get the most out of his script and his performers. Between his age and health concerns, I don’t know if we’re looking at another decade of his filmmaking, but it’s nice to see him back to just making movies instead of looking for validation.