2 min read
1 comment
FacebookTwitterRedditPinterestEmail
Find out who the villain will be and how costume difficulties were dealt with on 'The First Avenger: Captain America'.

With Joe Johnston out and about doing press for The Wolfman, several media outlets have had the opportunity to pose questions regarding The First Avenger: Captain America. Johnston has confirmed that the villain of the first movie will be the Red Skull, and went on to comment on why they decided to set the majority of the movie during WWII:

Regarding the costume, Johnston went on to tell us how he handled the challenges of a man wearing a flag. 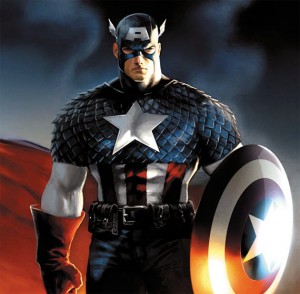 “The costume is a flag, but the way we’re getting around that is we have Steve Rogers forced into the USO circuit,” Johnston said. “After he’s made into this super-soldier, they decide they can’t send him into combat and risk him getting killed. He’s the only one and they can’t make more. So they say, ‘You’re going to be in this USO show’ and they give him a flag suit. He can’t wait to get out of it.”

“When he does go AWOL, he covers up the suit but then, after a few things happen, he realizes that this uniform allows him to lead. By then, he’s become a star in the public mind and a symbol. The guys get behind him because he embodies something special.”

“In the first USO sequences, the frustrated patriot will be wearing a version that is closer to the classic Jack Kirby-designed costume, but then later as the super-soldier hits the war zone he will be wearing a sturdier, more muted version that he makes himself that is more like battle togs. The stripes across his mid-section, for instance, will be straps, not colored fabric.”