The Book of Eli review

3 min read
1 comment
FacebookTwitterRedditPinterestEmail
You'll enjoy watching it for its "western-like" appeal, but be prepared for a WTF moment. 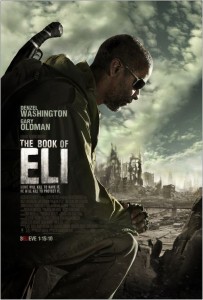 The first thing any fan of the Fallout franchise will notice is the incredibly similar art style to that of their beloved video games. The dusty and desolate atmosphere, the destroyed remains of major highways, and the mishmashing of various items together seem as if they’re pulled right from Fallout‘s concept art portfolio. The film also features a mysterious lone wanderer, something every Fallout game has used as its lead protagonist. That being said, while this movie might replicate the feel of that game series, its goal is something different.

Denzel Washington stars in this film as Eli, a mysterious wanderer who is transporting an important book that, according to most film synopsis’s, “holds the secrets to saving humankind.” After seeing the film, I find this summary along with what’s suggested by most trailers to be somewhat misleading, depending on your point of view. As movie reviews should never contain spoilers, I won’t tell you exactly what the book is, but if you’ve seen the promotional posters plastered with the phrases RELIGION IS POWER, DELIVER US, and BELIEVE IN HOPE, I’m sure you can figure it out. And no, Fallout fans, it’s not an assembly manual for building a G.E.C.K., something I would think would be far more useful in the world they live in.

The film is part post-apocalyptic drama, part action, and part western. The action scenes are done very well and spaced far enough apart to make them exciting. Washington is great as Eli; Mila Kunis and Gary Oldman represent their characters as they should, so I have no complaints with the acting.

The places where the film falls apart are the inconsistencies. There is a twist at the end of the film that is already stirring debates. I too questioned the validity of what it was presenting and how much sense it made. I even checked the screenplay to verify that I was properly interpreting what the Hughes brothers were showing me. I haven’t watched the film since confirming the twist, but by memory I can’t say that it was properly portrayed. In fact, I can remember evidence in the film that goes against what it presented in the twist. Even though it was all planned out beforehand, when it happens it feels like one of those times when they have inserted a twist just for the sake of having one or for lack of creativity.

Despite some consistency issues, I can’t say I didn’t enjoy watching the movie. I like seeing Denzel Washington in something other than his normal roles. I’d like to see him push himself into more unfamiliar territory in the future. At the very least, Fallout fans can look at this as a step in the right direction toward getting the movie they’ve been dying to see for years.

Bottom Line: You’ll enjoy watching it for its “western-like” appeal, but be prepared for a WTF moment.