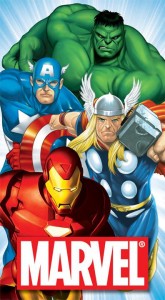 SFX Magazine‘s March issue features an interview with Marvel Studios President Kevin Feige in which he talks more about the studio’s upcoming projects and makes one fairly big reveal.

“It’s fun now, and we’re introducing some new characters in [‘Iron Man 2′],” he told the magazine. “But it’s not about just cramming in lots of new people; that’s sort of the cardinal sin of the sequel – adding in too many characters. This is totally Tony Stark’s story. And that’s gonna weave into Thor’s story, and Steve Rogers’ story, and it’s already ingrained with Nick Fury’s story and an organization known as S.H.I.E.L.D.”

He says that it is important to first focus on each character. “My only concern is that when we launch a franchise–whichever character’s franchise that may be–it should stand on its own two feet… So by the time ‘The Avengers’ comes in 2012, it’s not just a team superhero movie with a bunch of characters with powers. It’s three people – four including the Hulk; five including Nick Fury – who you’ve seen before in other movies, coming together for the very first time.”

Catch that Hulk bit? Feige also said that he won’t rule out the possibility of a second Incredible Hulk film with Edward Norton. “That would be post-‘Avengers,’ if it happened… I think there’s a chance. It’s certainly our intention to use the same actors from film to film where we can.”

Uh-oh. There have been rumors for awhile that the Hulk would actually be a villain in the upcoming Avengers movie. Not so much because he’s evil, but more so because he’s a monster out of control. I’ve been hoping this wouldn’t be the case as I’ve seen that story done enough times to know it’s not as interesting as having The Avengers take on someone or something else. I’m hoping this mentioning of the Hulk separately from the rest of the group is not an insinuation that this will be the case.

Feige was asked it will be difficult to meld the fantasy of Thor with the high-tech science fiction in Iron Man and The Avengers. “No,” he said, “because we’re doing the Jack Kirby/Stan Lee/Walt Simonson/J. Michael Straczynski ‘Thor.’ We’re not doing the blow-the-dust-off-of-the-old-Norse-book-in-your-library ‘Thor.’ And in the ‘Thor’ of the Marvel Universe, there’s a race called the Asgardians. And we’re linked through this Tree of Life that we’re unaware of. It’s real science, but we don’t know about it yet. The ‘Thor’ movie is about teaching people that.”

The magazine asked Feige what other characters may come to the big screen after The Avengers. “I love Doctor Strange. Ant-Man is like Whiplash – one of those chracters where you’re like, ‘Really?’ that we’ve got a fun story with. I’ve always wanted to do something with Black Panther. I think what Ed Brubaker and Matt Fraction have done with Iron Fist lately is great, and the Iron Fist mythology opens up a whole other part to us. I’d love to break into the cosmic side of the Marvel Universe even more- it’s kind of there in ‘Thor.’ J.J. Abrams’ ‘Star Trek’ got me jonesing to do that. It’s what I grew up on – ‘Star Trek’ and ‘Star Wars.’ I want to do a big space epic. And we’ve got them in Marvel.”