Alvin & the Chipmunks: The Squeakquel review

3 min read
Add comment
FacebookTwitterRedditPinterestEmail
A fun movie for the kids to check out, but it falls just short for the adults. Missing the traditional Chipmunks feel. 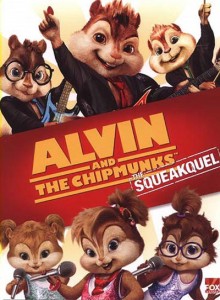 Although Jason Lee is listed as one of the “starring” individuals, his overall presence in the movie would lead me to believe he was either a) reluctant to do the sequel, b) the studio is finding a way to minimize his involvement, or c) there was a scheduling conflict. With the first movie being so heavily focused on the relationship between Dave Seville (Lee) and the Chipmunks, I was very disappointed to see the character pretty much removed from the main plot line. He exists in the film for maybe 10 minutes total.

To make matters worse, the caretaker role to the Chipmunks now goes to Toby Seville (Chuck‘s Zachary Levi), a relative of Dave who reluctantly takes on the responsibility. The part wasn’t necessarily acted poorly. The problem is that it’s not Dave and the character isn’t very likable. I’m not sure if his awkwardness and laziness were supposed to be charming, but when a romantic sub-plot develops for Toby, I wasn’t really routing for him to get the girl.

The other big problem with the movie is that it couldn’t decide what it wanted to be. The Chipmunks were trying to deal with starting school, “battling” two different villains in the return of Ian Hawke (David Cross) and a high school jock, trying to win a big sing-off for the school, learning more about family values, and winning over the Chipettes. If the film had narrowed its scope a bit by choosing one, maybe two main conflicts to tackle, it would have been more successful in telling a meaningful story and creating a more climactic finish.

Those issues aside, the Chipmunks (and Chipettes) remain their adorable selves. Alvin is still making mischief, Simon is still being the d0-gooder, and Theodore couldn’t be cuter. The writers definitely got out their book of famous movie quotes for this one. Alvin even goes as far as quoting Silence of the Lambs. Just try to imagine how they “squeaked” this one in (yeah, I did that). That’s about as much as the adult-oriented humor comes into play.

The kids will no doubt love this one. There are plenty of catchy songs sung by both the Chipmunks and Chipettes, loads of physical comedy, and even a fart joke or two. Despite its flaws, it still manages to be a fun movie to watch. With all the great song covers that were done, I’m still missing one song in particular. If we get to see a third Alvin & the Chipmunks movie, I’m hoping they’ll bring back this classic*:

*Note: Apparently there’s a new Alvin & the Chipmunks album out aside from the new movie soundtrack that features a remix of this, but it’s nothing like I’d hoped it’d be. I still want to see it performed in the next movie.

Bottom Line: A fun movie for the kids to check out, but it falls just short for the adults. Missing the traditional Chipmunks feel.