3 min read
1 comment
FacebookTwitterRedditPinterestEmail
Sherlock Holmes is an entertaining and fun film. As always, RDJ delivers a performance as only he can in what has to be Guy Ritchie's biggest success. 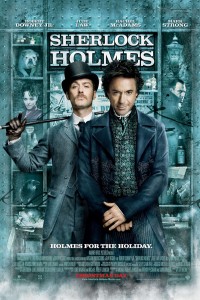 After a quick rundown review of Guy Ritchie’s films, I can honestly say that I, a) haven’t seen most of them, and b) wasn’t thrilled too much by the one’s I had seen. Sherlock Holmes is a welcome addition to a previously lackluster set of movies. Ritchie does a great job of putting all the necessary pieces together. We are presented with great action scenes, an engaging story, and fantastic performances.

The biggest stand-out in this movie is the performance put on by Robert Downey Jr. as Sherlock Holmes. Downey portrays Holmes’s frustration with humans in general to a tee, but does so in such an endearing manor that the audience can’t help but be charmed by him. This performance wouldn’t be complete without the addition of Jude Law, as Holmes isn’t complete without his Watson. Dr. Watson adds a humanity to Holmes in the way he is almost a father figure or coddling brother to the detective, despite Holmes’s ability to coerce him to do nearly anything he desires. The other humanizing element is Irene Adler (McAdams), who has a very Batman/Catwoman relationship with Sherlock Holmes. A criminal who is one of the few to outsmart the detective in the past, she continues to remain someone who Holmes has feelings for.

The premise isn’t anything that hasn’t been done before in one way or another, as the villain Lord Blackwood (Strong) grips London in a fear of his supernatural powers, while the non-believer Holmes attempts to unravel the mystery of his abilities through use of sheer logic and science. While it may have existed in other forms before, the unexpectedly welcome element of the supernatural brings an appropriate twist to the story.

The most successful aspect of the movie are the action scenes, especially the innovation of the pre-fight mechanic. To illustrate just how logical and brilliant Holmes is, we get a glimpse into his mind as he voices over the thought process he uses to take down an attacker, as if it were a game of chess in which he plans out all of his moves before the first is ever made. Following the slow-motion, detailed rundown, Holmes precedes to unfold the devastating set of maneuvers.

If anything could be considered a downside, the film felt about 20 minutes too long, and yet if you asked me which parts needed to be pulled I don’t think I would have an answer for you. The other missing aspect was that it seemed to lack some sort of punch . I can’t quite put my finger on exactly what it is that was missing, but given all of the successful elements, it still could have come off stronger.

Bottom line: Sherlock Holmes is an entertaining and fun film. As always, RDJ delivers a performance as only he can in what has to be Guy Ritchie’s biggest success.