8 min read
Add comment
FacebookTwitterRedditPinterestEmail
While Streets of Rage 4 isn’t the perfect sequel, it is a solid entry in the genre. If you’re looking for a game to casually pick up and play with a group of friends, you’re a fan of the franchise, or you just love Beat-Em-Ups, you can’t go wrong here.

For those of us who had the pleasure of growing up in the later ‘formative years’ of console gaming, the name Streets of Rage comes with a certain weight to it. Owning a Sega Genesis (Or Mega Drive if you were in Europe) often meant that you were treated to what felt like sloppy seconds of games that were prominent on the incredibly popular Super Nintendo, and there were a lot of classics that simply never made it onto Nintendo’s Blast-Processing competitor.

However, Streets of Rage was exciting, replayable and iconic, and most importantly its glorious Beat-Em-Up action was only available on the Genesis. I spent a huge amount of time with the original three games over the years, dragging anyone who could hold a controller to my couch to play. While I no doubt look back on the originals with the rose-tinted glasses of nostalgia, they still left me feeling like Streets of Rage 4 — taking up the mantle 26 years later — had big shoes to fill.

The game makes a valiant effort to fill those shoes. Jumping into the story mode from the main menu, the visual presentation and the music do an admirable job of replicating the old console experience. I wasn’t sold on the package right away—the graphics are crisp and beautiful in their own right but they are inarguably quite a stylistic departure from the original game. Streets of Rage 4 looks a lot more like a comic book come to life and does away with some of the grittier overtones the original games had, and I wasn’t excited about the style they went with in a lot of the pre-game press. Having now put a decent chunk of hours into the game, I can say that the art style really grows on you and that it looks way better in motion than it does in static images. This is helped by the fact that the animations are top notch, and a lot of the visual flair on some of the flashier attacks really make you feel like you’re dishing out some serious pain to your opponents.

The sound is a mixed bag. The effects are good and serve their purpose, while the music is a valiant attempt to recapture the feeling of the originals. I was pleasantly surprised to find out that they had even brought back series veteran composer Yuzo Koshiro to create a few original tracks for the new OST. Unfortunately, while those songs are good, most of the soundtrack isn’t particularly memorable. None of the tracks are outright bad, but of the 35 presented I only found a couple of them to be stand-outs.

The combat itself is everything you would expect out of the genre, without being too simplistic. There’s only 4 buttons to work with; One for picking up and throwing things, jump, light attack and a special heavy attack that costs health to use. Jump and light attack are exactly what they seem, and mostly the same across the cast but the heavy attack has some depth to it. 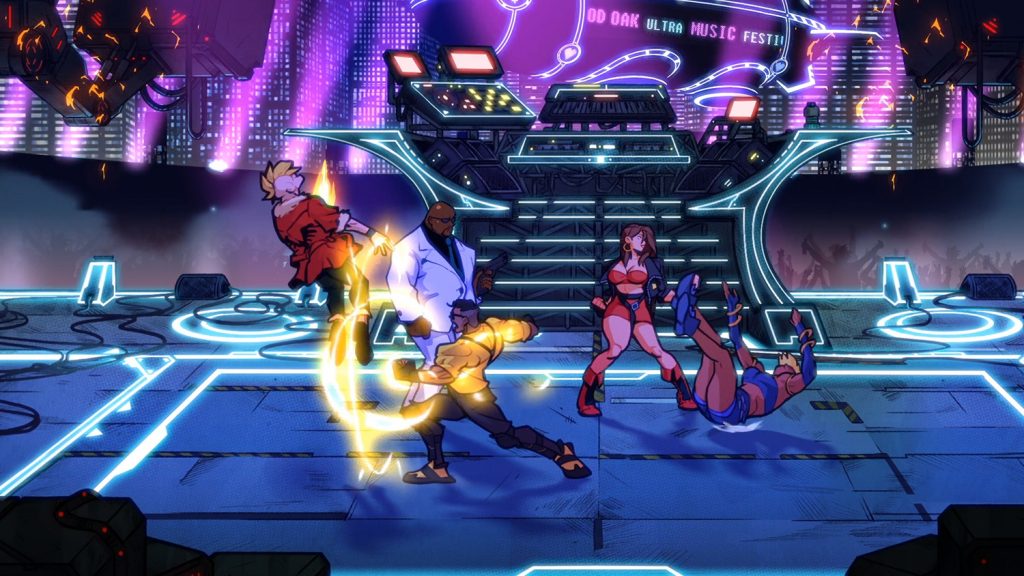 Standing still and pressing heavy attack will give you a defensive special move, moving forward and pressing it will give you an offensive heavy move, and jumping and pressing it will give you a third, aerial variation of the attack. As mentioned, all of these cost you health to use with the caveat that you can earn that health back if you land your next few attacks—but if you take a hit, you can kiss that health goodbye. On top of this, as you play you’ll collect stars which give you access to a very powerful special move which is akin to the heavy attacks in the old games, but you can only expect a couple of these per level. Finally, all the new cast can hold down the light attack button for a charged-up attack that will knock their enemies back when they need some breathing room.

Adding on to this is a variety of different weapons, some big, some small, all throwable, that allow you a decent amount of variety when it comes to combat. The game feels good to play. Attacks feel like they have weight, throwing an enemy across the screen and bowling over three other guys is as satisfying today as it was 26 years ago. When you start throwing in the heavy attacks that often act as combo starters or extenders, Streets of Rage 4 reaches a depth with its gameplay that the previous titles never found. All of this is tied together by the great animations and tight controls. The result is everything having a very clean, weighty, and satisfying feel to it.

The enemy variety is also pretty good, and the game does an admirable job of introducing new enemies that require more complex strategies than just walking up and punching them which keeps it interesting all the way up to the end credits. 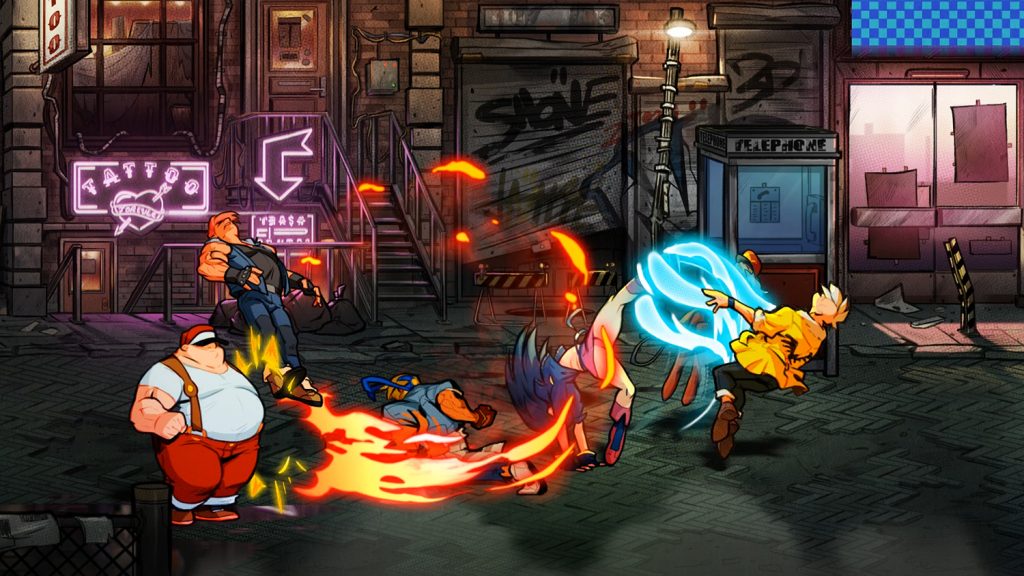 Where the game falters unfortunately is around some of the bizarre decisions to do with enemy and player abilities. One of the most glaring omissions is the fact that none of the characters can run by default, which two decades into a genre where this is considered to be a staple feels very limiting not to be able to do. Characters move at a snails’ pace across the screen, and while that’s great for positioning exactly where you want to be when lining up an attack, it also can be extremely frustrating when you’re trying to get away from incoming attacks.

This is compounded by the fact that more than half of the enemies in the game have no issue crossing the entire length of the screen in an instant, homing perfectly onto you if you were foolish enough to stand still during their often very brief wind-ups.

In the later stages of the game it will often feel as if your opponents are doing a dance around you, showering the arenas with places you cannot be, and your only recourse is to constantly be moving and waiting for the exact right moment to strike. Enemies can begin attacks off screen, resulting in you being hit by an attack you couldn’t possibly have seen coming. Presumably, the game intends for you to use the defensive heavy moves provided in order to deal with these tactics, but those often don’t work the way you would expect.

Which leads to one of the other most frustrating mechanics in the game, and that’s the use of super-armor on a huge number of enemies and attacks in the game. For those of you not familiar with the term; ‘super-armor’ is when an enemy will take a hit without flinching while executing an attack, and regardless of the damage or number of hits they receive, will hit you with the full force of the attack. In most Beat-Em-Ups, these moves are either highly telegraphed or reserved for boss characters, as they’ll completely interrupt anything you’re trying to do; but almost all the mid-to-late game enemies make gratuitous use of the mechanic. 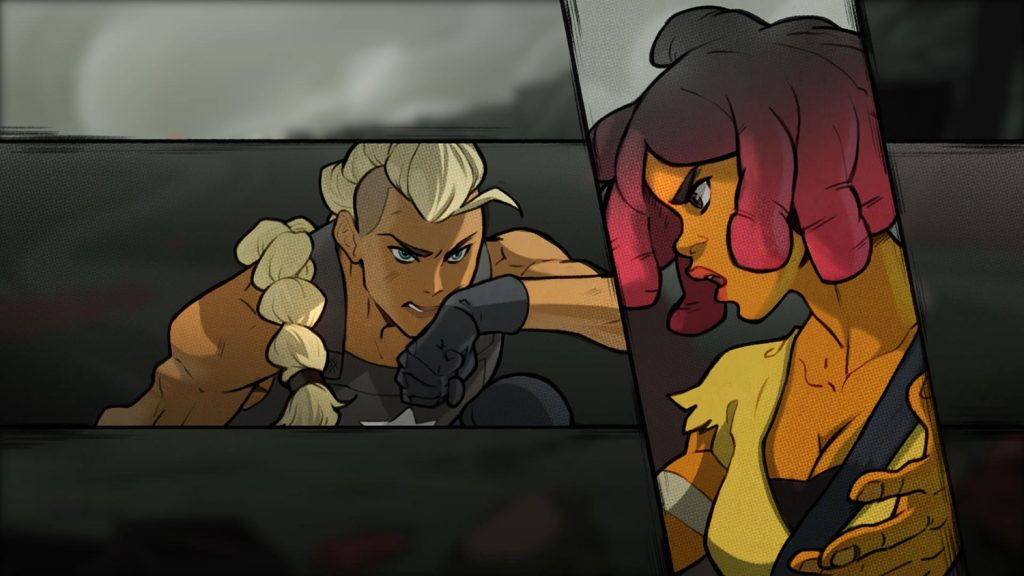 Because Streets of Rage 4 gives you limited lives, health is a precious resource and one that you will want to manage meticulously, and this is especially true on the higher difficulties (With ‘Hard’ presenting a pretty significant challenge if you’re playing solo.). Unfortunately, the lack of mobility and egregious use of super armor and quick cross-screen homing attacks means that the harder difficulties in the game are usually more an exercise of trial and error rather than technical skill in order to complete for the first time. It can make the game very frustrating, especially if you’re tackling the enemies by yourself or with only one other person.

Flaws aside though, if you don’t take the game too seriously there’s a fun time to be had and that fun multiplies the more people you add into the mix. Like all entries into the genre, Streets of Rage 4 is best enjoyed with as many friends as you can gather.

The story mode is expectedly pretty short, and you can expect a first run through of the story to only take 2 or 3 hours at the top end.  There’s plenty of replay value to be had though, as the game awards you new characters to play as you rack up your score across the levels, giving you almost all of the characters from the previous 3 games in all their low-resolution glory.  Once you’re done with that, there’s an arcade mode that affords you no continues if you die and a battle mode if you feel like challenging your friends. 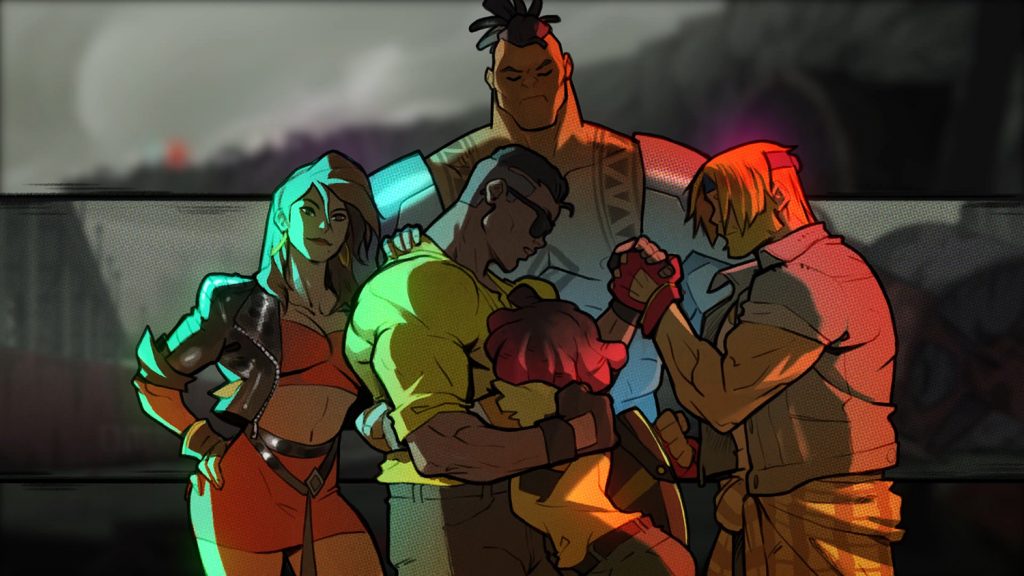