5 min read
Add comment
FacebookTwitterRedditPinterestEmail
Skellboy takes the core elements of classic adventure games and attempts to realize them in 3D while holding tightly to its 2D platformer roots, but falls flat due to a lack of direction and repetitive game design.

Marching through dungeons, solving puzzles, slaying monsters, and collecting upgrades are all synonymous with classic adventure games. Skellboy, the newest release from Umaiki games, takes these core elements and attempts to realize them in 3D while holding tightly to its 2D platformer roots but falls flat due to a lack of direction and repetitive game design.

The titular skeleton, Skippy, fumbles his way into being tasked with saving the princess of the Cubold Kingdom and waging a war against the sorcerer Squaruman. I know. What a hilarious name. Hacking and slashing your way through the realm and trying to dodge the onslaught of square puns requires gathering an arsenal of weapons, including five weapon types and mixed-and-matched body parts that are strewn about the kingdom.

The weapons themselves provide little variety, and properly aiming the few projectile options is so disjointed that you’re better off swinging the heavy club for almost every fight. Later levels offer upgrades to your weapon types, but they don’t offer any meaningful extra utility. And even with a handful of enemy abilities to copy and steal along the way, each level of the adventure feels like more of the same.

Some of this redundancy could have been relieved if the game provided a map to follow. I spent several hours of my time aimlessly backtracking to find my next mission, and the game’s unpredictable camera turns and poorly marked invisible walls make even familiar locations difficult to recognize and frustrating to navigate. Fence posts in one area of a field may be leapt over with ease, but an identical post around the corner is insurmountable and can force you to walk around an entire map area to get to the other side. This problem stems, in part, due to a lack of clearly demonstrated depth thanks to the game’s art style.

Skellboy’s unique style stems from giving 3-D life to 2-D pixel art. The artwork excels from a stylistic standpoint, but as an element of the game itself, it creates unclear visual cues in the environment, making traversing the overworld inconvenient. Items, switches, and doors all prompt a not-so-subtle pop up that announces whether or not you can interact with them. From afar, it’s anybody’s guess.

The visual clutter only gets worse in combat when spells, explosions, and assorted projectiles begin to rain down. Swirling clouds and cube-shaped damage indicators flood the screen, obscuring Skippy and his enemies and slowing the framerate to a crawl. During more frenzied encounters, I was waiting for seconds at a time for the game to return to a playable state and dying prompts an equally long, black loading screen. And I died. I died a lot. 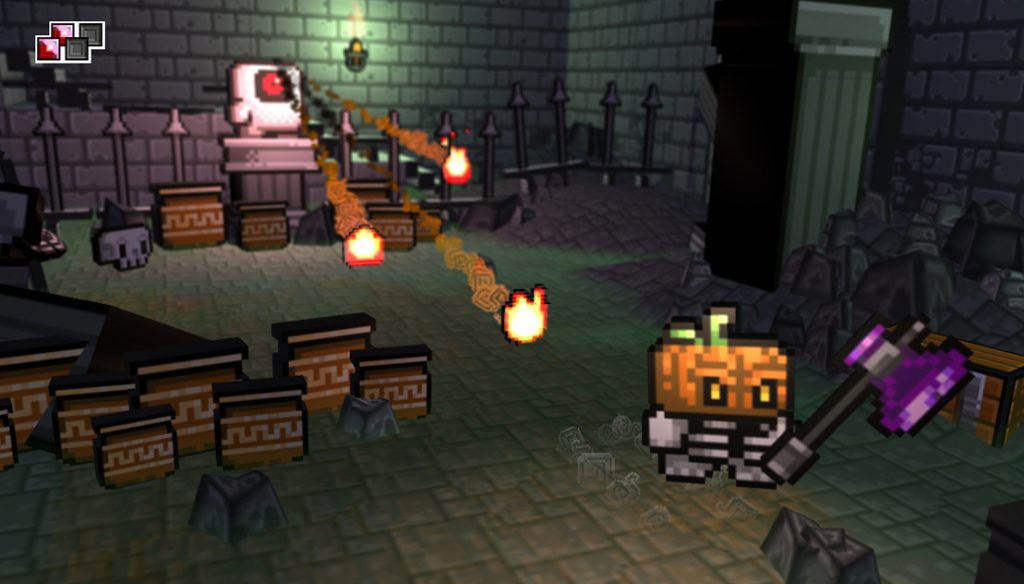 Enemies respawn en masse any time you leave an area, and with the amount of time spent aimlessly wandering hoping to find my next destination, I routinely fought off the same orcs and skeletons that I had about ten minutes prior. Many of my numerous deaths came from a hope that I could sprint through an area without having to clear it for a second or third time. Passing by a gravestone gives you a place to respawn when you collapse into a pile of squares, but old checkpoints do not remain active, and since checkpoints are few and far between, you may respawn only to have to fight your way through the same 10 minutes of gameplay again, even if you cross several regions of the world.

Few of the game’s segments feel like distinct levels that could have been used to break up the monotony of the overworld in a Legend of Zelda-style dungeon dive. The few times that Skellboy attempts to change its formula and provide a dungeon crawl, it only manages to make things worse. Walking around feels like a chore, and Skippy moves at a snail’s pace. Trying to hop through a sewer system without legs or arms slows it even further. Jumping across chasms onto narrow platforms is less a platforming skill challenge and more a battle against poor camera angles with poor depth perception.

Skellboy’s cutesy charm and pun-driven dialogue can only carry it for so long. The sheer volume of square-based jokes makes the narrative unbearable to read. Its gameplay lacks complexity, and the Cubold Kingdom is an uninspiring, cookie cutter adventureland—nothing more than a hollow copy of its pixelated predecessors. New tools and abilities never offer enough change to give any weight to in-game progression, and the progress is slowed even further by Skippy’s short legs and sluggish movement speed. Similar titles have done more with less, and Skellboy should have been there, but it chose to be square. 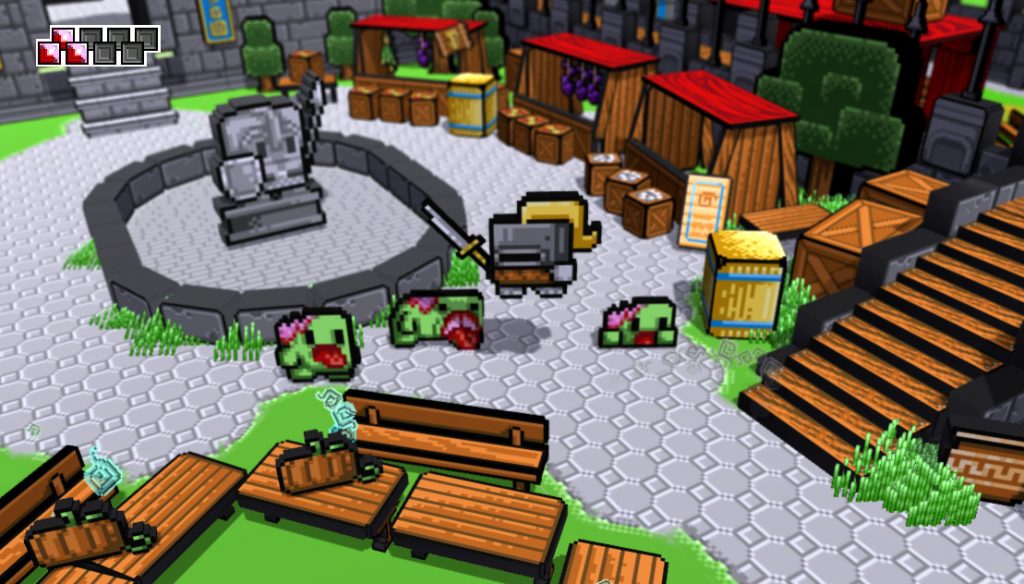 Note: Game key for Nintendo Switch was provided by the developer. This had no bearing on our review.