8 min read
Add comment
FacebookTwitterRedditPinterestEmail
The time period of GreedFall, combined with the diverse variety of cultures fighting for Tir Fradee give shape to a dynamic, living world, while the intricate character customization system and fluid decision-making options allow you to affect that world as you explore the island.

Fantasy RPGs often rely on sword and sorcery adventures in dark castles or star-spanning science fiction universes in order to share their story. GreedFall, the newest release from French developer Spiders, takes you aboard a ship bound for the recently colonized island of Tir Fradi (or Teer Fradee in the colonized spelling) and is set in a fantastical, Age of Discovery-like era that’s full to the brim with grandiose ships, alchemical mixtures, and rampant colonialism. The novel time period combined with the diverse variety of cultures fighting for Tir Fradee give shape to a dynamic, living world, while the intricate character customization system and fluid decision-making options allow you to affect that world as you explore the island.

Prior to embarking on your expedition to Tir Fradi, you are provided a brief tutorial set in the coastal city of Sérène . Here you enter the world of the player character, De Sardet, cousin to the would-be governor of New Sérène—your country’s colony on the island—as they set out to find a cure to a terrible disease known as the Malichor. While in Sérène you are tasked with introducing yourself to local ambassadors, investigating two disappearances, and familiarizing yourself with your character’s starting abilities. 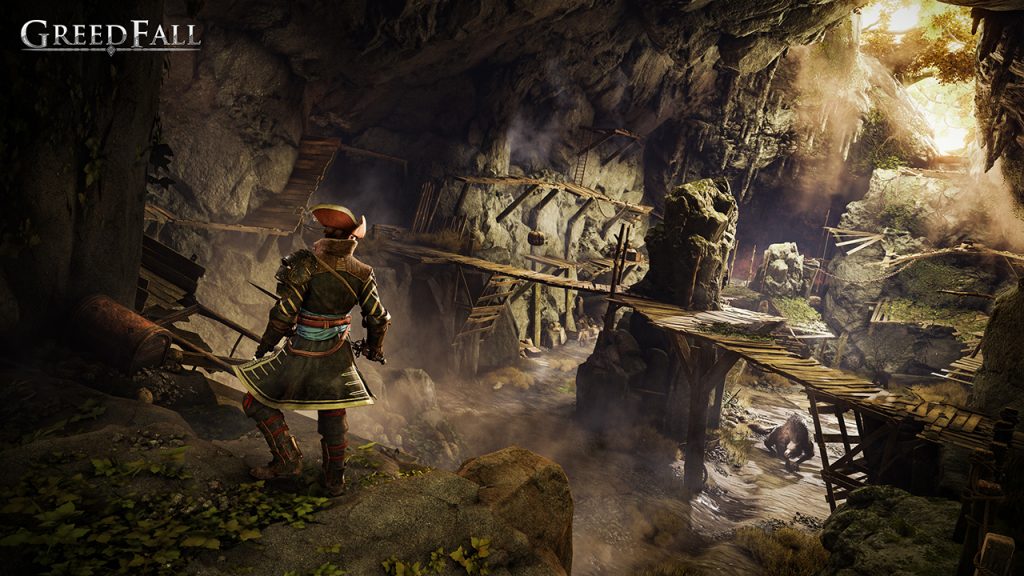 Abilities are divided into three categories—skills, attributes, and talents—each with their own skill trees and customization options. When creating De Sardet, you begin by selecting a template that follows one of three paths: Strength, Magic, or Science, but this selection does not limit your decisions later in the game. The “Skills” tree primarily adds customization to the combat aspects of the game; you can focus on light or heavy weapons, guns and traps, or offensive and manipulative magic as well as mixing and matching to your heart’s desire (and your experience level).

The “Attributes” tree offers ways to customize De Sardet’s equipment loadout. Allocating a point to one of the six branches can allow you to wield stronger weapons or sturdier armor. The “Talents” tree directly impacts how you explore the game. With “Science” you may be able to blow up a wall to get inside of a building and craft potions to aid you, but if you instead dedicate points to “Charisma” you might just charm your way into the building and buy your potions at a discount from the local merchant. Building this layer of customization into a limited point system affords you the chance to create a character that fits with your playstyle but isn’t simply a master of everything.

Once your ship delivers you to the harbors of New Sérène, you are free to begin exploring once you’ve done your diplomatic duty and met with the governors of the other factions in the world. These include the matriarch of the God-fearing city of Theleme, and the governor of Hikmet, a city founded by a council of scientists. These factions, along with your own, a mercenary army, a fleet of sailors, and the natives of the island, push and pull for your allegiance throughout the campaign. Many of the side quests you undertake and decisions you make in the larger story determine how you are perceived by each group and how willing they are to help you. 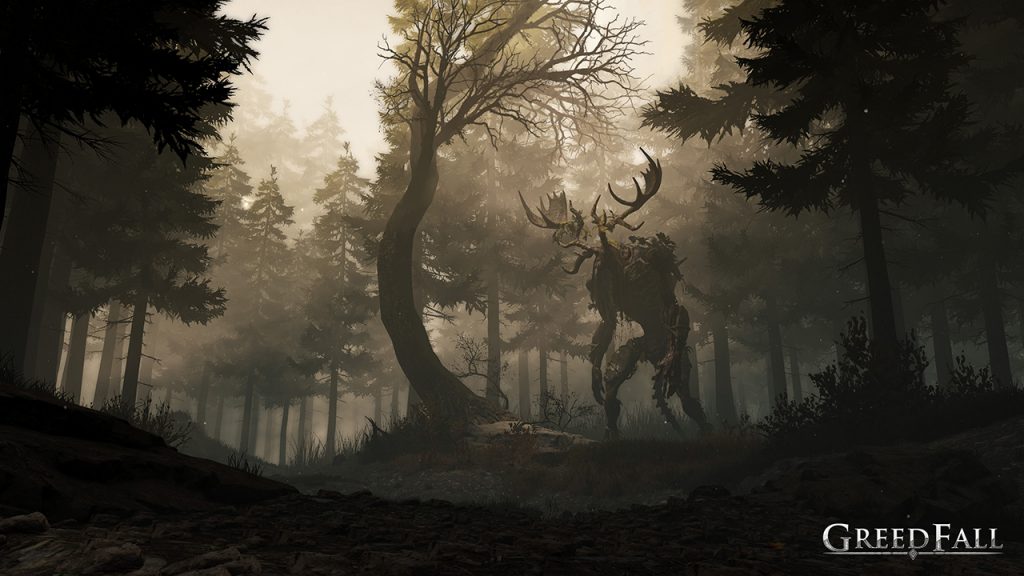 In much the same way that real-world political issues do not often have a right or wrong answer, GreedFall does not judge you on the moral standard of your decision-making process and instead rewards or condemns you through reaction. While the island nation devolves into war between the natives and colonists, you are tasked with deciding which, if any, of the invading parties has a right to be on Tir Fradi, and whether you can trust the native people as their world is consumed by outside forces.

Freeing a native from conversion by missionaries may sour your relationship with Theleme; executing a scientist of Hikmet found to be violently interrogating a native warchief might improve your standing with the local tribe, but Hikmet’s guards may refuse to let you enter a camp nearby. This flexibility provides a blank slate for placing your own morals and beliefs into the character of De Sardet who, despite feeling like a blank canvas, is wonderfully voiced and passionate.

Your relationship to the factions of the island also impacts your relationship to your traveling companions. Each of the five factions provides a representative for your team. You are able to travel with two companions at a time, but they can be changed easily at in-game fast-travel campsites. By choosing a companion appropriate for your current quest, you are also able to unlock more dialogue options that may aid you. For example, bringing along Siora, the native representative for your party, to a meeting with a doneigada, or shaman, can give you further insight into a ritual they are conducting.

I found Siora to be an invaluable asset as a large portion of the story involves meeting with and understanding the native tribes. It is for this reason that the native culture is immensely deep and vibrant, where the broader cultures of Theleme and Hikmet are shaped by a rather high-level religion versus science discussion. The natives, in contrast, have a wholly new language constructed from Gaelic and several other native European languages. Over the course of your journey you are permitted snippets into the rich cultural stories and beliefs distributed throughout your quests. 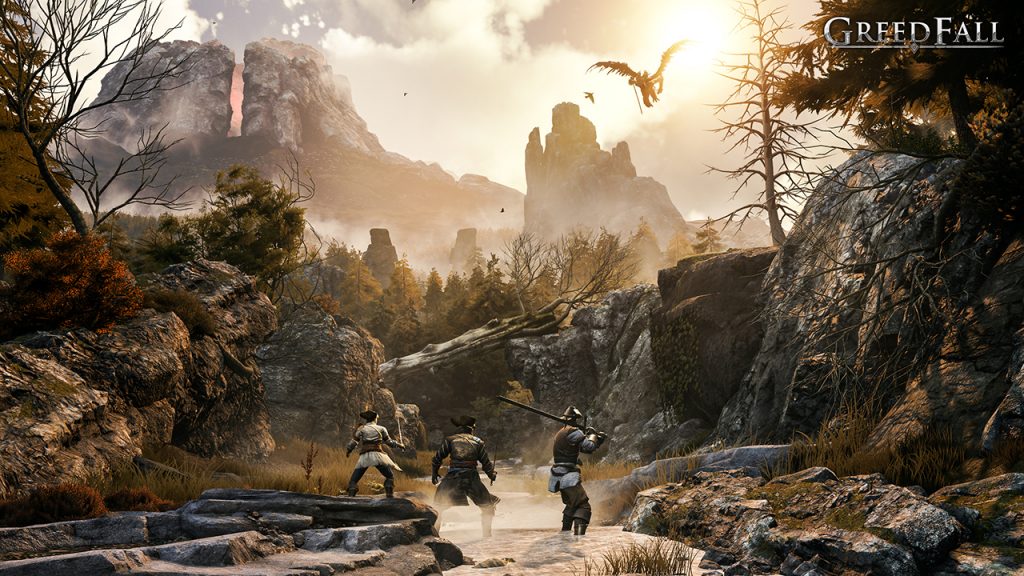 In true RPG fashion, GreedFall has an assortment of mission types from diplomatic, dialogue-heavy encounters to assassinations and detective-style investigations. The missions themselves feel at home in the world, and the wide range of choices from the “Talents” skill tree often create moments where you can complete a quest by different means than the intended route. Other missions, however, are rigid and can begin to feel repetitive as you fast travel to and from the same destinations multiple times only to press through a dialogue sequence and return somewhere to relay the NPC’s message.

The life of a diplomat may get boring, but the life of an adventurer and explorer is engaging and dangerous. GreedFall’s combat system, built on dodging, swiping, and firing blasts of magic and lead, feels like a light version of The Witcher series’ extremely flexible battle mechanics. Dancing through battle, you are also able to quickly draw from a tactical pause menu. When a massive nature spirit was lunging my way, it was nice to be able to quickly freeze gameplay and choose my next move. My largest complaint rests on the fact that I wanted more. The enemy types are limited, and once I recognized their patterns, combat became simplistic. Thankfully, this largely remains a technical limitation for Spider’s small team than it is a pressing issue that is detrimental to gameplay.

The largest detriment to gameplay is the game’s navigation. The forests and cities of Tir Fradi are individual maps, loosely connected by start-and-stop fast travel points. This form of travel is not uncommon from the heyday of narrative RPGs like Bioshock, and is actually quite well implemented into GreedFall, as you can make camp between each destination and prepare your team and supplies. When traveling through a specific location, GreedFall does not ever clearly distinguish where you can and cannot walk, and the world map does not make the distinction any easier.

For as central as navigation is to a game based in an era of expansion and exploration, the issues with navigation and the occasional backtracking mission are a small price to pay for a spectacular game, carefully crafted by a small team of forty. Spiders has preserved and delivered on a dying form of narrative and character-driven RPG in a market swarmed by endlessly open worlds. The likes of Bioshock and Dishonored cornered the market on contained, story-driven adventure games, and GreedFall has hung its tricorn hat alongside these legacy adventure franchises. 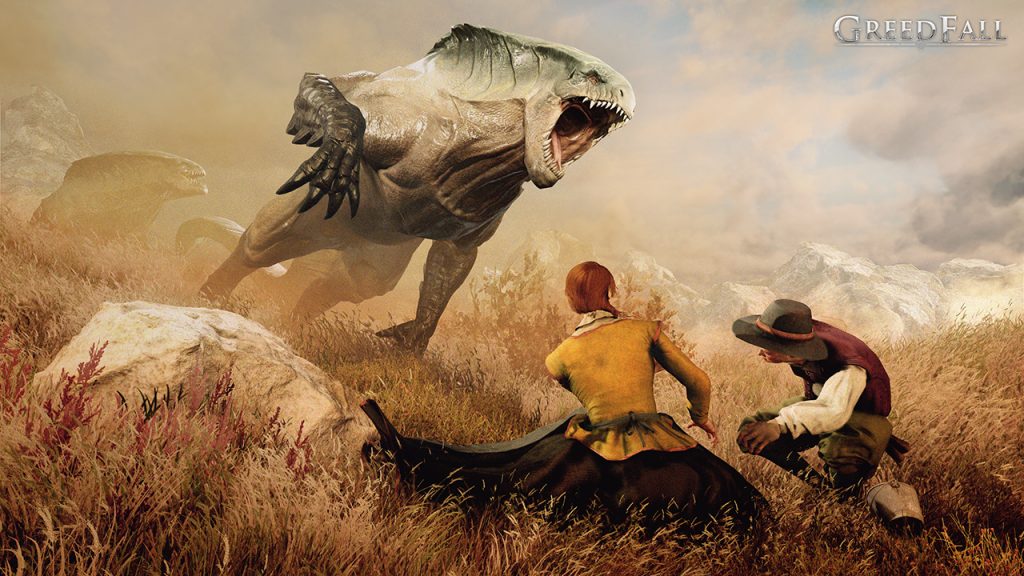 + In-depth character customization that can open or close dialogue and exploration options
+ Responsive world and narrative that change based on your decisions
+ Multi-faceted companion characters with their own beliefs and stakes in the world
+ Unique fantasy setting layered with a detailed history for you to explore
+ Inspired voice acting and accent work add to the immersion of Tir Fradi
+ Fluid, exciting combat system

Note: Game key was provided by the developer. This had no bearing on our review.