Reign of the Supermen – trailer

3 min read
Add comment Watch LaterRemove Cinema Mode
FacebookTwitterRedditPinterestEmail
Many try, but only one can claim the title of Superman in an all-new animated film from Warner Bros. Home Entertainment and DC. 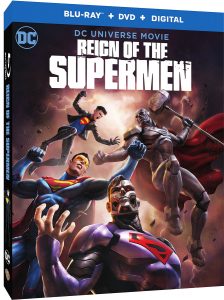 The world must cope with the loss of Superman – and the sudden emergence of four would-be heirs to the title – in the all-new, action-packed Reign of the Supermen, part of the popular series of DC Universe Movies. Produced by Warner Bros. Animation and DC, the feature-length animated film arrives from Warner Bros. Home Entertainment on Digital starting January 15, 2019, and on Ultra HD Blu-ray Combo Pack and Blu-ray Combo Pack on January 29, 2019.

Reign of the Supermen finds Earth’s citizens – and the Man of Steel’s heroic contemporaries – dealing with a world without Superman. But the aftermath of Superman’s death, and the subsequent disappearance of his body, leads to a new mystery – is Superman still alive? The question is further complicated when four new super-powered individuals – Steel, Cyborg Superman, Superboy and the Eradicator – emerge to proclaim themselves as the ultimate hero. In the end, only one will be able to proclaim himself the world’s true Superman.

Reign of the Supermen is the second half of a two-part DC Universe Movies experience that began in August 2018 with The Death of Superman – the two films telling a more faithful animated version of “The Death of Superman,” DC’s landmark 1992-93 comic phenomenon. Superman Doomsday, the inaugural film in the DC Universe Movies series, told an abridged version of that comics story, but with a runtime of 75 minutes, the film was only able to focus on a core, singular storyline. The Death of Superman and Reign of the Supermen restore many of the moments and characters that fans hold dear to their hearts.

The Reign of the Supermen all-star cast is led by Jerry O’Connell, Rebecca Romijn, and Rainn Wilson as the voices of Superman, Lois Lane, and Lex Luthor, respectively. The potent trio is joined by the DC Universe Movies’ returning voices of the Justice League: Jason O’Mara as Batman, Rosario Dawson as Wonder Woman, Shemar Moore as Cyborg, Nathan Fillion as Green Lantern/Hal Jordan, Christopher Gorham as The Flash, and Nyambi Nyambi as Martian Manhunter.

Producer Sam Liu also directs Reign of the Supermen from a script by Jim Krieg and Tim Sheridan. Amy McKenna is producer, and Alan Burnett is co-producer. Executive Producers are Sam Register and James Tucker.

BoosterGreg joins PB and Rob for a debate game show! We also chat about which fictional world we’d choose to live in and time travel stories we like.