7 min read
Add comment
FacebookTwitterRedditPinterestEmail
Despite minor complaints and some repetition in gameplay, Jurassic World Evolution allows you to live out your dinosaur park-owning dreams.

Jurassic Park is a title widely regarded for its adventurous and ambitious nature. A one of a kind story, truly setting standards and redefining boundaries for film and what we can believe in as an audience. Now, of course, there is not proof of an actual existing “dino park” (that we know of) but there is still an obvious demand to feed the hunger that consumers have for raising and breeding their very own Velociraptor. The developers over at Frontier have tapped into that demand by creating one of Steam’s most popular titles: Jurassic World Evolution.

As a huge Jurassic Park fan myself, growing up with the films and still following the franchise today you can only imagine my excitement when news dropped about this new and promising dinosaur park simulator. Frontier has experience with park sims, like Planet Coaster, in which I’ve personally dedicated an embarrassing number of hours to creating my own Lord of the Rings and Harry Potter themed parks. They’re equipped with fully decorated Hobbit holes, a replica of Hogwarts and even a Sauron’s Eye Rollercoaster. Knowing how pleased I was with Planet Coaster, Evolution was at the top of my wishlist. 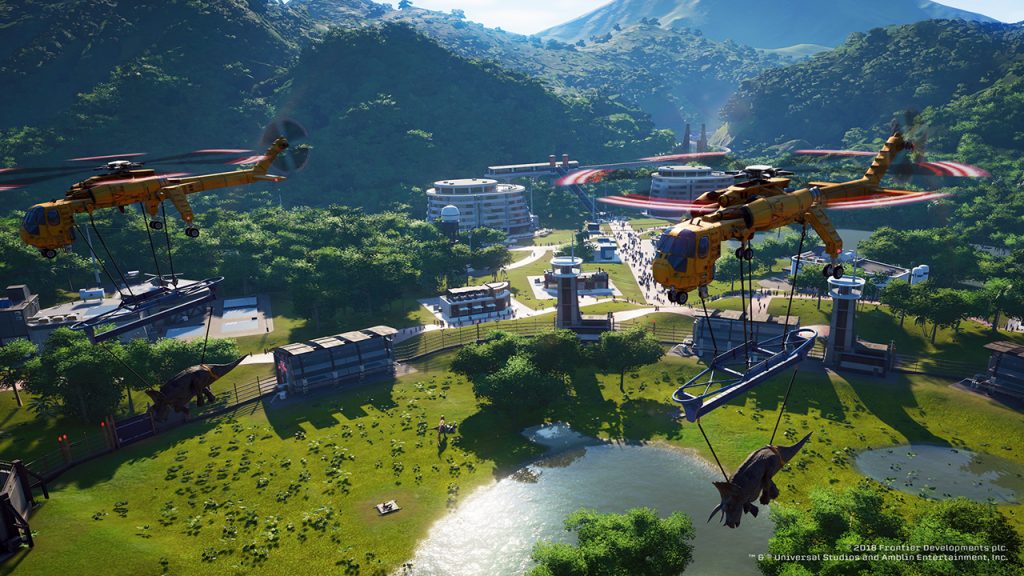 The opening scene of the game begins with the nostalgic trumpets of the Jurassic Park theme song, with the camera coasting through the air across your new home, the gorgeous island of Isla Matanceros. The soothing voice of Jeff Goldblum introduces you to your first assignment. Here you begin your quest to incubate your first dinosaur, construct your first buildings on the island, and begin managing three departments of your newly acquired lawsuit-waiting-to-happen: science, entertainment, and security.

There are five islands that make up the Muertes Archipelago. Isla Mantanceros, Isla Muerta, Isla Sorna, Isla Tacano, and Isla Pena (not to mention a 6th island which is considered the “sandbox” island, there for your stress free joy and amusement). Navigating each island has its own set of difficulties ranging from preparing for disastrous weather to successfully making sure each guest has been fed. These small challenges, when completed, add points to each department of your park. I started my journey favoring the science department. I mean, science is what got us dinosaurs, right? The development with the science department led me to travel the world to excavate new fossils in order to guarantee a stronger genome for incubations. Naturally, I put funds into researching genetic modifications immediately so that I could bioengineer my dinosaurs. Not only to be the strongest, but of course, the prettiest. 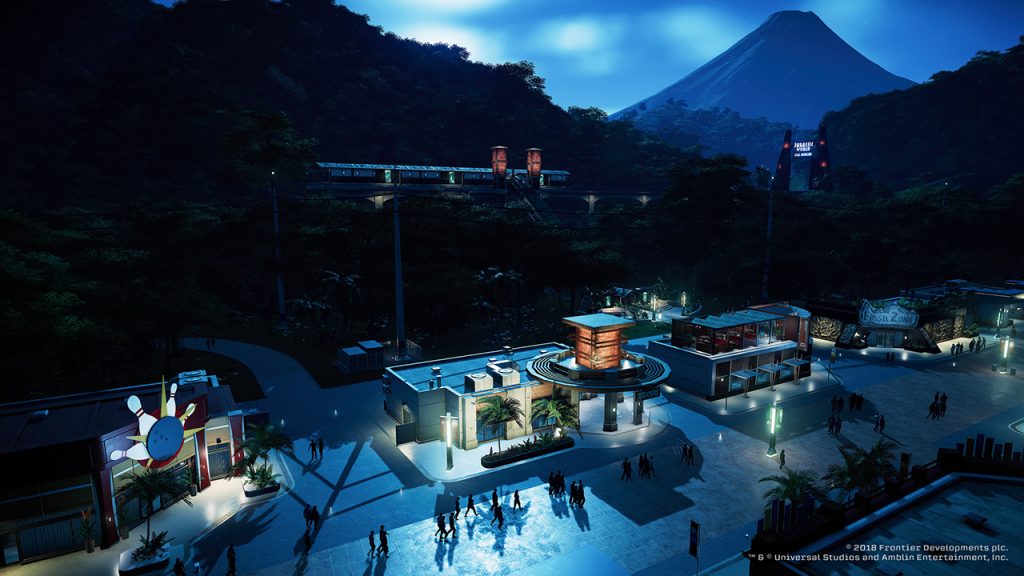 Of course, through favoring one department I quickly learned that it’s near impossible to run a successful park without fairly distributing funds. Once the design and build of my park was complete, a 5-star park rating was only a matter of time. If you can effectively manage each department of your park, you quickly unlock the second island with a new economy and geography ready for you to play.

The game, although fun and full of adventure, is similar to its movie counterpart in that it still has its own set of problems. Many of the obstacles the islands present can feel cumbersome or repetitive. One of these obstacles regards requesting contracts. Contracts exist in order to further level up a department. You can request a new contract every 1 or 2 minutes. Requesting contracts is an essential part of the game. Sometimes though, the contracts you are landed with do not pair up with your progression in the game. Often they are far ahead of your current level. This is easily fixed by cancelling that contract with no damage to your parks reputation, but it still can be a bit tedious when trying to reach certain milestones. At times there can be frustration with placing buildings in certain areas and relocating buildings for more space. Sometimes you’ll find the perfect spot for a building but the ground underneath it (although looking flat as a board) is slightly uneven, preventing you from building. This can be easily solved by flattening the land and readjusting. I will admit this obstacle is less aggravating in comparison to a similar one in Planet Coaster but is still a mechanic that could get better with finer tuning.

Unlike most business and building simulators, there’s a small bit of narrative that advances as you progress throughout the game. The characters you interact with have more depth and motivation than you’d anticipate, even if they can feel flat at times. Cameos from Claire Dearing (voiced in-game by Bryce Dallas Howard) and Owen Grady, for example, lack some of the charm of their movie counterparts. It did, however, make me wonder what the potential of a more narrative-oriented game, driven by meaningful tasks and richer characters could be and how that would immerse the player in running a park. 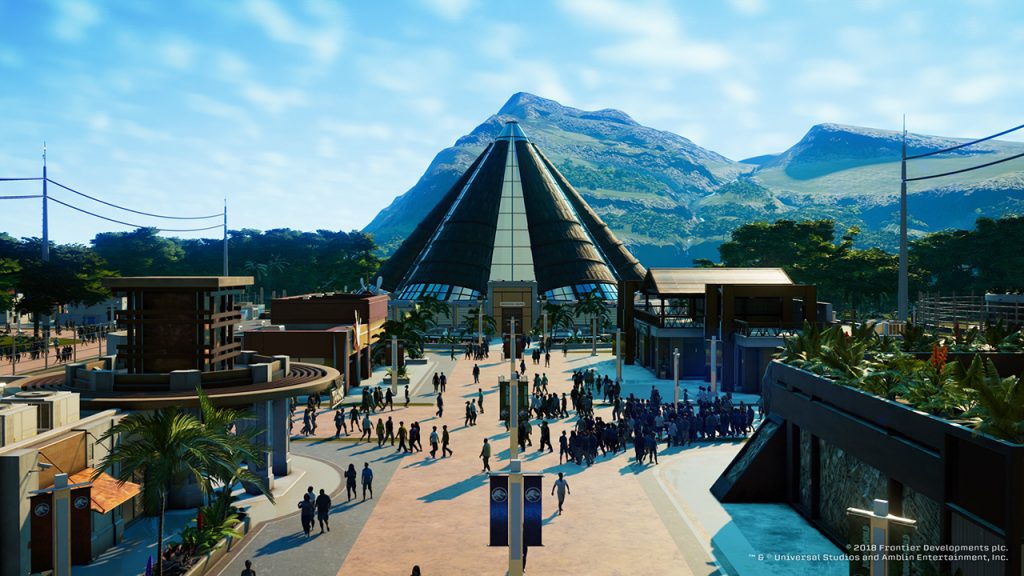 After you get your groove of the land and start understanding the system, like unlocking the dinosaurs and achieving all of the locked attractions, it’s easy to get bored and start looking for more from the game. The millions of dollars you can make through your park could pave the way for bigger and better things but the game does not allow funds to be transferred across islands. Instead, you start each island of the archipelago with a base sum and are not able to tap into any of your previous resources. This stole my desire for even making money in the first place. Which, isn’t that the main focus when running a theme park? The money? Even more important, SPENDING that money?

Other mechanics such as managing guest attractions and the employees at those attractions seemed to lack depth. For example, in Planet Coaster you can name and manage each employee individually. The pay can vary from employee to employee and you can move an employee to a different part of the park if needed. This doesn’t exist much in Evolution outside of the Ranger Team. This lack of detail is also reflected in the process of unlocking attractions and shops. The threshold for unlocking new buildings isn’t very high and once you’ve reached that threshold a lot of motivation to play fades.

These minor complaints didn’t stop me from enjoying the game. Living out my childhood dream of owning my own dinosaur theme park (virtual or not) feels fulfilled, and I look forward to seeing the game expand in the future. I still spent hours fawning over my newly incubated dinosaurs and spent far too much time driving around in my Jurassic Park, classic-skinned Jeep taking photos of my dino friends, all the while gasping at the amount of money I received (or didn’t receive) from some of my favorite shots. 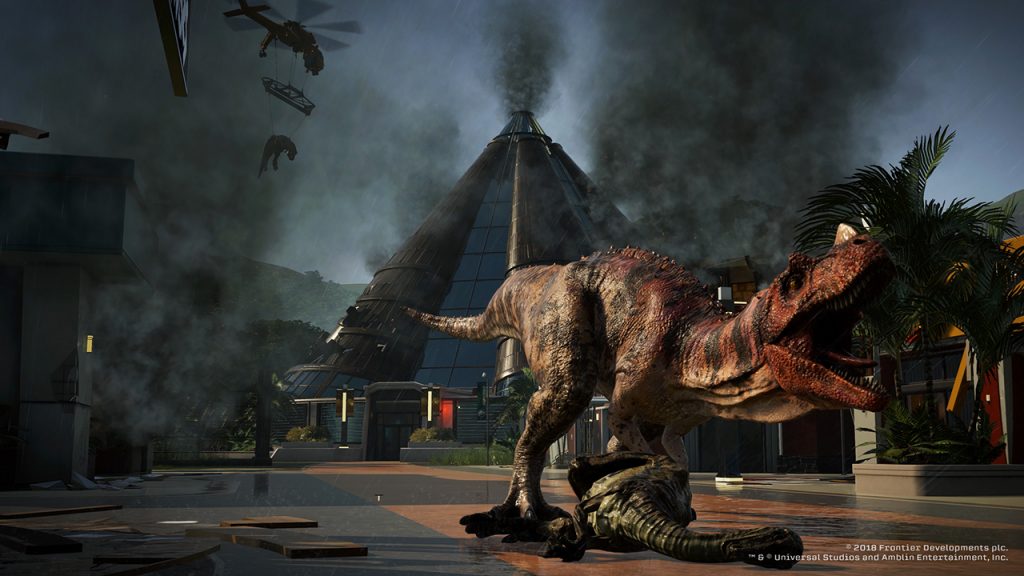 Thus far the game has done well financially and is gaining popularity with broadcasters on services such as Twitch. Jurassic World Evolution provides a setting and theme that is easy to create an entire show around, making it fun not only to play but to watch. With that, the game delivered in ways I did not expect. It’s a business simulator and movie title game that is setting a new standard for the industry. Many critics complain about the pricing and I agreed with that criticism initially. Now having played through the game and understanding the depth and complexity of its open world system, the pricing now seems more than fair.

I’m looking forward to finishing my “science heavy” playthrough and starting up a new save dedicated to chaos and casualties. The different builds and possibilities are exciting and provide a lengthy and dedicated experience for each player. I can only hope there is more to come from this title and others like it.

Jurassic World Evolution is available for purchase in the Humble Store.