7 min read
Add comment
FacebookTwitterRedditPinterestEmail
The Raven Remastered relished in the tropes of its genre—complete with every caricature and plot twist imaginable. Unfortunately for the Raven, some relics of the past aren’t meant to leave their display case.

The Raven Remastered is an HD rerelease of The Raven: Legacy of a Master Thief (2013) and is a traditional, point-and-click mystery divided into three chapters, each giving the player the opportunity to play through a single narrative from multiple perspectives.

A security guard finds himself on a not-so-diligent watch at the British Museum, reading over a piece in the news: “Return of the Raven? The raven’s heir is on the loose.” Beyond the regular wonders of the museum he is also guarding one of the two Eyes of the Sphinx, invaluable treasures of the ancient world. He folds the paper over and calls out for his partner, but he seems to have vanished. In the silence he finds a police officer lying in wait to catch a thief, a thief we see clad in black and wearing a black feather. In a matter of moments, the poorly protected jewel is gone and the guards give chase, but the Raven is a master thief. An explosion masks their escape and the Eye is gone. 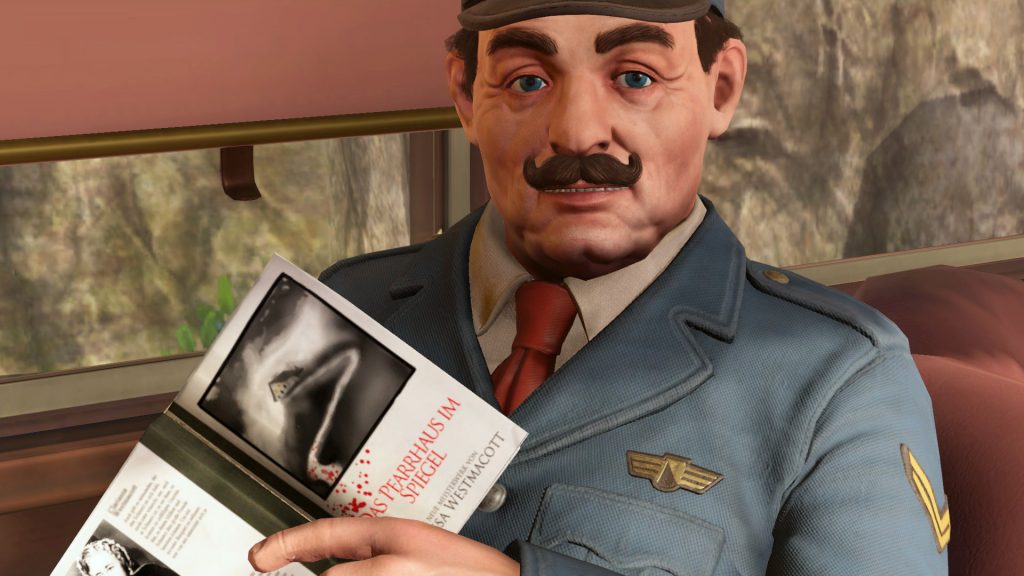 With an opening that dynamic my hopes were high for The Raven’s story. I expected a gripping homage to the detective genre that boomed through the mid-20th century. I instead began the game in control of a bumbling oaf of a detective. The main character for much of the story, Anton Zellner, is a middle-aged policeman set on stopping the most notorious criminal in Europe. Guiding Zellner through the game brought me face-to-face with every conceivable cliché, which included but was not limited to: a rich baroness being murdered, the German doctor being a secret, ex-Nazi, lights inexplicably darkening and letters appearing as they returned, and, my personal favorite, ending the first part of the second arc of the story with “the butler did it.”

All of this nonsense is jammed into the first two chapters of the story. In the third, you are granted control of several background characters. The first of these is the only non-white character in the game and is only referred to as “the Arab” for a considerable portion of the story, but that is another critique to explore. The purpose of the change is to give the player more insight into the backdrop of the bland story. It is from this new perspective that The Raven is able to lightly toy with some of the tropes it established in the earlier pieces of the game, but it never commits to subverting them entirely. Instead, the story goes up in smoke as the ending is by far the most out of place piece of the poorly constructed series of puzzles.

The point-and-click genre is fairly straightforward mechanically: you click on an object to get information about it or on a person to speak to them. Through this you gather clues which help you to solve puzzles. The Raven manages to turn these two tasks into tiresome chores. While the experience is more streamlined on the PC version of the game as you click from object to object, the console port requires you to walk up to your targets. This would not have been nearly as troubling if the game’s movement mechanics functioned properly. I regularly found myself moving in the wrong direction, and even after engaging with an item, my character would pace in circles several times before actually interacting.

Once I was able to interact with an object or a character, I was also faced with the tedium of doing it two to three more times to get every line of dialogue out of that engagement. When I needed to access a locked door, I went about looking for something to pick the lock. “Oh, the paperclip!” I thought, but when I interacted with it for the first time, I heard Zellner’s thoughts on paperclips. It took me ten minutes of exploring elsewhere before doubling back and pressing the button two more times for him to pick it up. This was promptly followed by a lockpicking minigame that relied entirely on guessing. Rather than rewarding my deduction skills, The Raven sought to test how long I would spend bending a bit of metal. 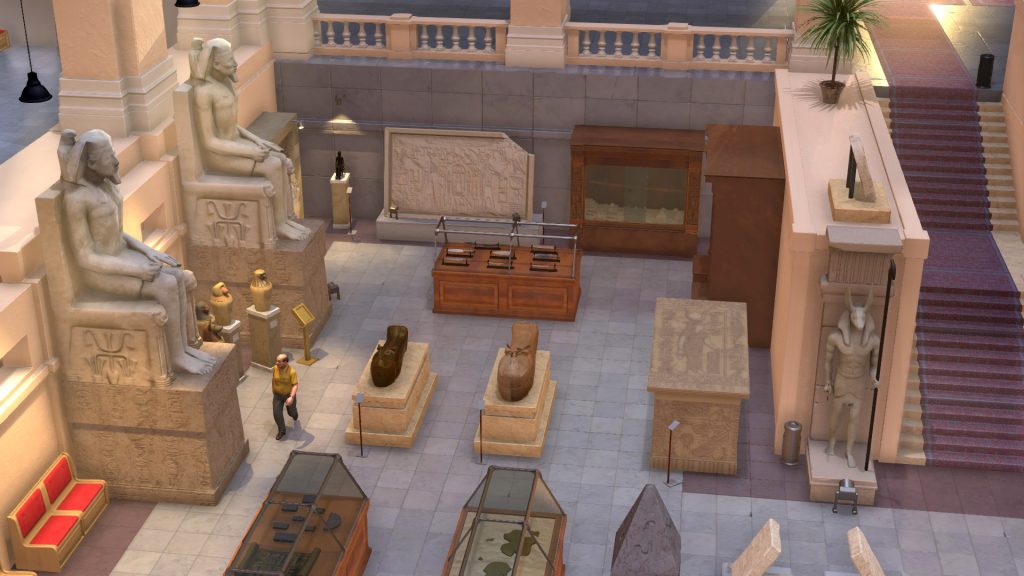 Games like Myst and the Telltale series of games present complex puzzles that reward thorough exploration of your surroundings. The Raven’s puzzles, or lack thereof, were hardly solvable even after arming yourself with every clue imaginable as they were poorly marked. After spending about ten hours playing through the game, only one puzzle gave me any sense of accomplishment, and I had to drag myself through six, identical dialogue options with four separate NPCs.

The NPCs that I was forced to engage with were also not particularly vibrant to look at. From the start of my journey, I considered that The Raven Remastered is exactly that, a fresh coat of paint on an older title, but I would have believed it if I had been told the game came out in the mid- to late-2000’s with its stiff and often bugged character models and muddled textures.

The larger set pieces easily outshine the lackluster character models and objects, but even the more visually interesting backdrops went to waste because of the game’s poor camera angles. The Orient Express, for example, which served as the location for half of the game’s first chapter, was hardly navigable in combination with the game’s clunky controls and I found myself moving back and forth toward a doorway several times hoping to make button prompts appear.

If The Raven can offer any redemption for itself, it would be in the form of its enchanting score. The Swiss countryside, the open, cerulean Mediterranean, and the mysteries of the museum are all carried on the shoulders of magical, cinema-worthy scores. While the controls often left me spinning my character in circles, the soundtrack kept my mind engaged in the world in a way that few other scores would be able to by themselves. Unfortunately, the spell it casts has a duration, and as I fumbled my way from room to room, the score inevitably became taunting as it looped, expecting me to have already advanced to a new space. The only reprieve became interacting with objects or other characters.

In a game driven by interaction with my environment, as indifferent as I was to each of the uninteresting characters and the stilted writing, the voice cast of The Raven did a phenomenal job. The narrative could have been strengthened, perhaps even made compelling, if the story had been told in a different medium as the cast itself brought their (albeit bland) characters to life. 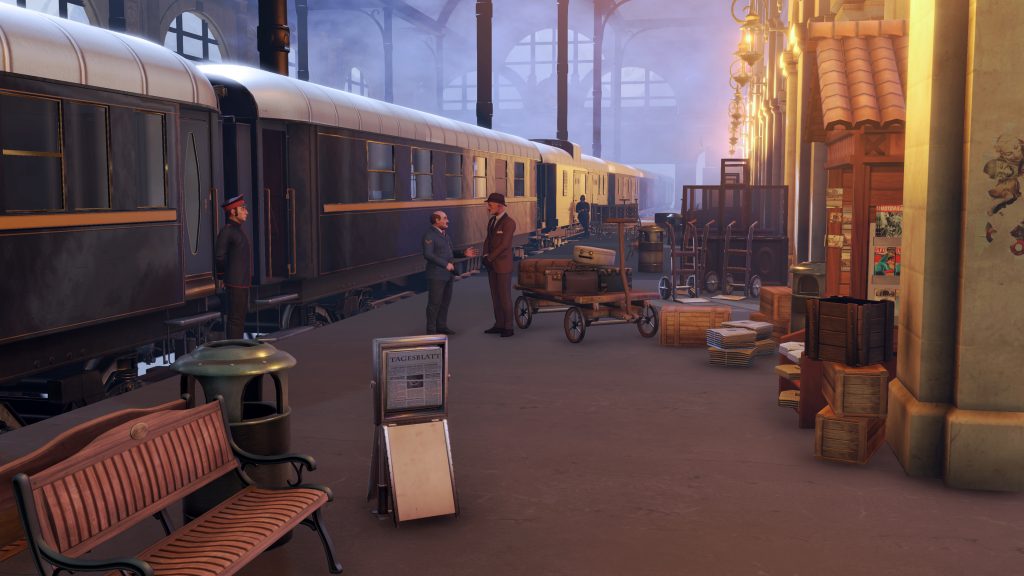 The Raven Remastered for the Playstation 4 is a poorly executed and hollow attempt at the point-and-click mystery genre. The entire cast of characters is nothing but caricature, and the narrative is easily forgotten. These narrative problems are compounded by mechanically frustrating puzzles and tragically slow gameplay pacing. The musical stylings and voice acting are both fantastic, but as a whole the game felt like a poor recreation of a relic of the past.

game review The Raven Remastered The Raven: Legacy of a Master Thief