Originally experienced in 2015 on the PS Vita, Kick & Fennick has found a new home on 8th generation consoles. The game is a strategic 2-D platformer with shooter elements. For the purpose of this review I played through the Wii U version.

Soon after waking up in a desolate but colorful world, Kick meets a small flying robot named Fennick. When Fennick saves Kick from a menacing guard robot, they find out Fennick’s battery is broken. Together, they embark on an adventure to the Core Tower to find Fennick a new energy core.

The game is split up between 5 chapters with sporadic cut-scenes throughout. The game has no dialogue and instead everything is conveyed through gestures and expressions. Despite the well crafted emotions, the story is rather bare bones and I feel it’s fair to say that other than the objective at hand, nothing is mentioned regarding Kick’s backstory nor this post-futuristic world. 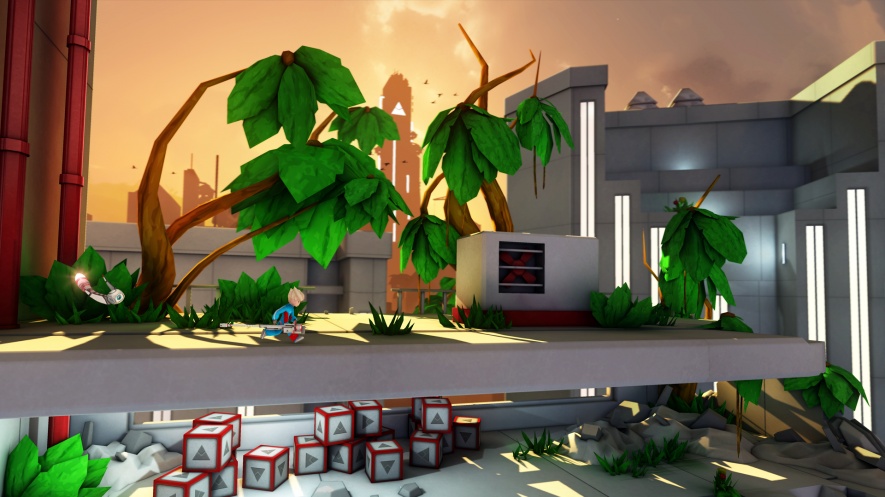 With a massive blaster comes massive recoil. Kick lacks the ability to jump and instead uses the push-back from his blaster to propel himself from platform to platform. The blaster has two chargers allowing for a sort of ‘double-jump’ ability. Of course, the blaster can also be used to shoot down enemies. Due to this dual use of the blaster, one must remember that blasting an enemy, particularly in the air, can also change Kick’s trajectory. While aiming, time slows down considerably allowing for greater precision and, more excitingly, slow-motion effects that can make blasting an enemy all the more satisfying. I want to also point out with excitement that this is one of the few games that I’ve played that actually has fun underwater sections in one of the chapters. While in water, Kick can propel himself indefinitely making for quick and painless exploration.

Worth pointing out is that Kick is essentially a glass cannon and will “die” upon taking damage. However, Fennick can save him from harm and “respawn” him on the last safe platform he was on (although I did find myself occasionally disagreeing with the game’s choice of placement). On Easy difficulty, there is no limit to the number of respawns, but Normal and Hard modes are limited. Throughout each level, there are 50 small gears that can be collected. Each level also contains one “Special Gear” and collecting enough will unlock new outfits for Kick to wear.

Without many actual actions other than running, aiming, and firing, controls are quite simple and responsive – but it certainly takes a little getting used to not having a standard jump ability. Also worth noting is that while there is some directional influence that can move Kick left and right in the air, it has very little effect overall (unlike classic titles like Mega Man or Super Mario Bros.).

The Wii U version features off-TV play which is expected and works perfectly. The gamepad can also toggle a screen that just shows Fennick’s model as he appears on the TV.

The games visuals are very well done. Particularly for the Wii U, it was very refreshing to see full 3-D high definition models from a more modest title. Animation is clean both in gameplay and during cutscenes and close ups of Kick are well done. Despite the good looking visuals, the variety of the backgrounds is quite lack-luster. The entire world appears to be made up of futuristic, slightly run-down, high-tech industrial buildings. Because of this, most levels tend to look very similar despite the different puzzles and layouts presented. If you were to select a level at random, it would be hard to tell what chapter it comes from, let alone the specific level without using other context.

Most levels are only accompanied by music in small sections where needed. For the most part, the background is filled in by background effects – the sound of thunder, the crackle of electricity, the blips of computers. Music themes are reserved for moments of action, boss fights, and cut scenes are well crafted. 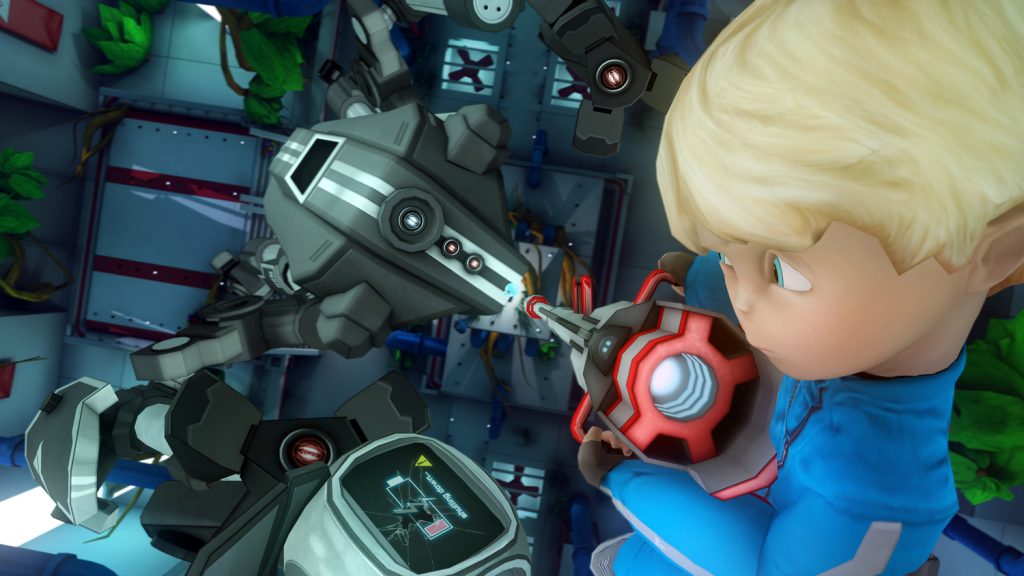 Kick & Fennick is fun from a gameplay standpoint and has very impressive visual design. The game can be beaten in about 5 hours if one isn’t too concerned about collecting every single thing. Controls are pretty good once you get the hang of it and the variety in level mechanics keeps the game quite fresh. The game has my recommendation, but just don’t get too excited for a major story arc or a dynamic world.