4 min read
Add comment
FacebookTwitterRedditPinterestEmail
It simply doesn’t have much more mileage than a single afternoon, which now that I think about it, might have been the point all along... given the cast.

Coffin Dodgers is one of those kart racing games that would be described as “plucky” or “full of charm” if the cast was a bunch of cute animals or icons from a non-racing franchise. However, since the racers are old people on scooters, using the above adjectives would not exactly be fair.

Coffin Dodgers has you take control of one of several “forever young” residents of a retirement community. They are looking to dodge the icy cool hand of death by winning a series of scooter races where last place literally means you’re dead last. Each race, the stakes get higher as the souls that the Reaper claims come back as zombies and the conditions for you to remain among the living increase in difficulty.

Back in the day, a title like this would have been a Wal-Mart Bargain Bin PlayStation One game that you’d read the back cover of and dare one of your friends to buy it. In the age of Steam and Indie Showcases on console, however, Coffin Dodgers is an affordable, and at least original, take on the kart genre. 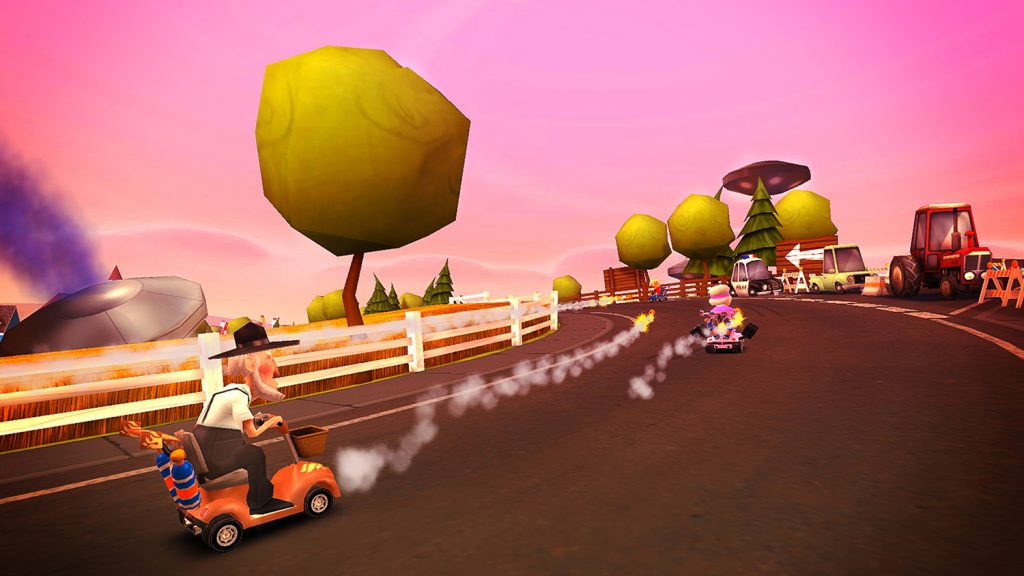 Is it any good? Well, conceptually you’d have to decide that for yourself as old people aren’t your usual video game protagonists; but as a game it’s a mixed bag. The controls aren’t quite as sharp as one would like, but they should at least feel familiar to anyone who has ever raced in the Mushroom Kingdom at any point of their video game career. The courses are creative as are the hazards that you’ll be exposed to over the duration of four laps. It’s also worth noting that many of the power ups can be used against said hazards, which opens up the game’s strategy a little bit. Should you save the briefcase uzi for your opponents? Or do you open up a magazine against all the zombies that are now in the middle of the road? It’s a shame that this wasn’t explored further as it was a nice touch and one that I hope other kart racers emulate.

The scooter customization is a nice feature, but sadly since you can just retry the same race if you lose while retaining currency/exp, getting the scooter of your wildest dreams actually becomes something of a grind. Didn’t win the last race because you couldn’t catch back up? No problem, just retry it until you can afford the engine part that corrects the issue. This made the overall sense of peril non-existent as it became clear that no matter what, I’d be the winner.

The strongest part of this game for many will be the ironic humor laced throughout. It only carries the game so far though, as once you’ve played through the story and seen the twist that allows you to unlock the last character, that’s pretty much it. The open world mode is a fun diversion and the game does allow you to do split-screen 2-player but this isn’t really the kind of racer that is meant to be competitive, which works out since the Road Rash-inspired cane attacks are not that satisfying to pull off. In fact, they require far more effort than simply avoiding the herd or hitting your enemy with a projectile.

All-in-all this game will be picked up and put down by most in a single afternoon. It simply doesn’t have much more mileage than that, which now that I think about it, might have been the point all along… given the cast. 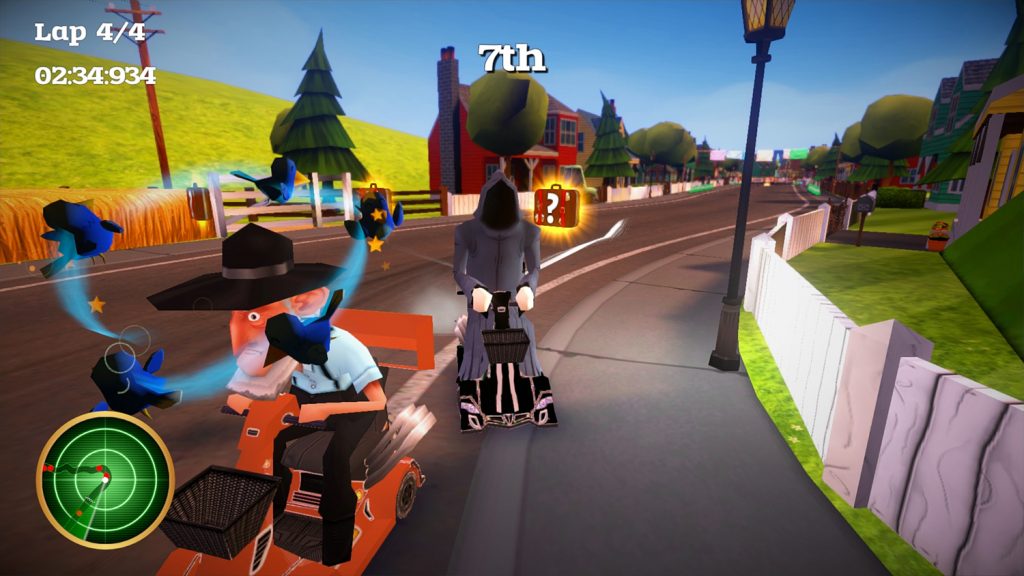