SpeedRunners is a cut-throat multiplayer running game that pits 4 players against each other, locally and/or online. Run, jump, swing around, and use devious weapons and pick-ups to knock opponents off-screen.

While there is a story mode in SpeedRunners, this game’s all about the multiplayer. The story mode is fairly thin, featuring only one playable character that’s essentially chasing down the other runners. Like a fighting game, the story is really just an excuse to get to the next race. There are short comic books that are unlocked at the completion of each chapter that add a little, but not much.

SpeedRunners is insanely fun to play. Each race features 4 runners trying to stay in the lead and knock the others off the screen. This is achieved by running, grappling, and using item pick-ups to attack or slow down the other runners. While the gameplay itself is fairly simple and easy to pick up, mastery requires understanding of how to build and maintain momentum, and knowing the capabilities of each weapon. Using the golden hook to steal another runner’s momentum at the height of their speed and using a shockwave to destroy an incoming rocket are both extremely satisfying when timed correctly.

As a game built primarily for multiplayer, matchmaking is an important component. If you can, you’re better off playing against friends as adding them to the game is easy and online lag seems minimal. Over a few sessions of allowing the online matchmaking to do its thing, it took a long time to find anyone else playing within my rank, often resulting in playing against someone quite a bit better than myself and almost always in a one-on-one race.

There is Twitch integration which allows viewers to vote before the race on who they think is going to win, but this only works for viewers of the person hosting the game. Other participating runners don’t even get to see who the votes are being placed for. 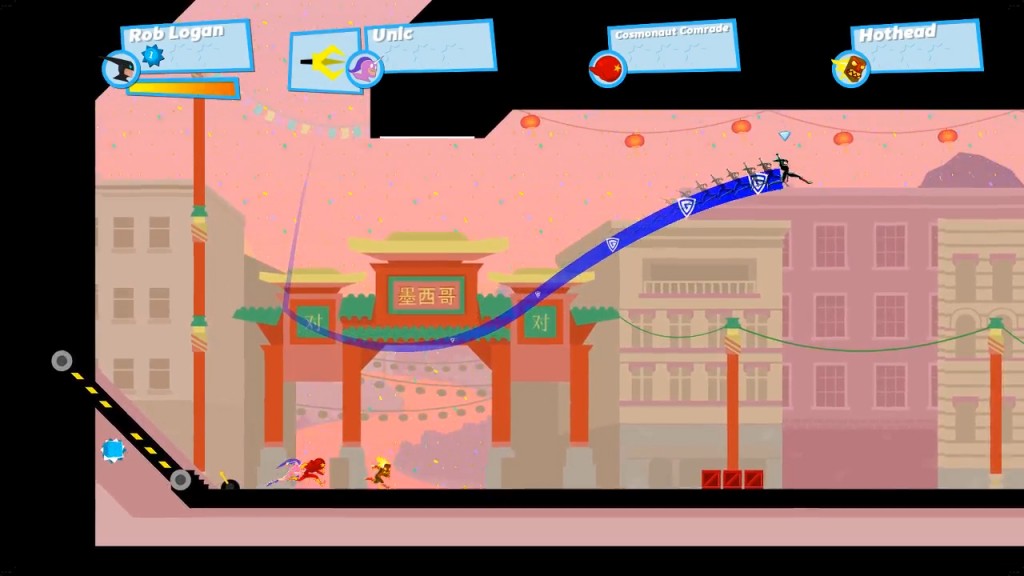 There are also a few customization options within the game, including both a trailer editor and level editor. The trail editor is pretty easy to pick up and I managed to create a custom trail for The Geek Generation which has a blue streak and generates a trailer of white G-shield logos and I pick up speed. (You can download it on the Steam Workshop here: http://steamcommunity.com/sharedfiles/filedetails/?id=669138794) A level editor is also included, which is a huge benefit to the game as it allows for infinite replayability. As skilled runners often memorize the base levels, playing in a custom level can even the playing field by forcing runners to rely on their reflexes.

The art-style, character design, and music in SpeedRunners all remind me of The Incredibles in tone. The characters are often ridiculous, in a charming way, featuring men in shark and chicken costumes, a black cat dressed as a witch, and a velociraptor wearing jeans. With a game so intensely competitive, keeping a light-hearted, humorous tone can help to deflate any rising frustrations and help everyone involved maintain their friendships.