4 min read
Add comment
FacebookTwitterRedditPinterestEmail
Mario Kart is the biggest spin-off franchise in Nintendo's collection, with the eighth one on its way for the Nintendo Wii U on March 30th.

Mario Kart is the biggest spin-off franchise in Nintendo’s collection with titles spanning across 7 different platforms, with the eighth one on its way for the Nintendo Wii U. With a release date of May 30, 2014, Mario Kart 8 is looking to combine the best traits from each game in the series and will be the first of many big first party titles that could potentially give the Wii U the momentum that it certainly needs. 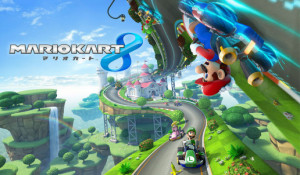 The most anticipated detail that will be appearing in Mario Kart 8 is the introduction of anti-gravity racing. When approaching specific sections of a course, the wheels of the karts will glow blue and turn in under the vehicle activating anti-gravity mode. This allows racers to drive up walls, vertical slopes, and even on sections where the course loops completely upside down. Instead of slowing each other down, collisions between racers in these areas will instead cause small increases in speed that can quickly turn the tide. This new game mechanic will allow for alternate racing paths, new strategies and even crazier race tracks than ever before.

The tried and true formula of Mario and friends racing around crazy racetracks while throwing items at each other will return with promises of heavy customization and balance. Like in Mario Kart Wii, the traditional 8 competitor races have been expanded to 12 and will again feature many different game modes.

Returning from Mario Kart Wii is the ability to race in both karts and on motor bikes, but Mario Kart 8 is adding a new class of vehicles – ATVs (All Terrain Vehicles). Each of the three will have their own innate advantages and disadvantages in different situations.

The game also plans to expand upon the kart customization system seen in Mario Kart 7 (3DS) where players can select different karts that already have their own stats and further customize them by adding different tires and gliders (another feature from MK7). This will allow for slight alterations in stats, raising some while lowering others.

As expected, the traditional Koopa shells and mushrooms will be a big part of this game. In total, 21 items will be returning alongside 4 new unique ones: The Boomerang Flower, Piranha Plant, Super Horn and The Crazy 8.

Like its predecessor, Mario Kart 8 will have both local and online multiplayer modes. Unlike previous titles, local multiplayer will feature a left and right split screen as opposed to horizontal splitting. Online multiplayer will feature 4 different modes – Worldwide, Regional, Friends, and Tournaments. Up to 12 players will be able to compete in online races. Tournaments can be created with customized rules for others to join. 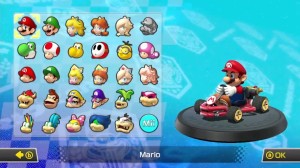 Thirty playable characters have been confirmed for Mario Kart 8, including 9 new racers hopping into karts for their first time. The 7 Koopalings – Bowser’s old-time minions who have seen new life in recent New Super Mario Bros. titles, Baby Rosalina – a lightweight form of the galactic princess, and Golden Pink Peach (Princess Peach’s answer to Mario’s metal form) are all making their Mario Kart debut.

This roster results in 13 lightweight characters, 7 middleweights, and 9 heavyweights. Players using their Miis will have a weight class determined by their Mii’s personal traits.

Like previous titles in the series, 32 courses will be in the game. There will be 16 new tracks and 16 retro courses that have been redone and recreated to fit this new game. Course graphics show that they appear to be more realistic and less cartoonish; featuring less bright colors and more detail. The soundtrack is also composed from live instruments.

Mario Kart 8 will be offering an online service that will let players record racers for other players to view. These videos can also be uploaded directly to YouTube.  This is the first of any efforts by Nintendo to make the sharing of gameplay videos easier. 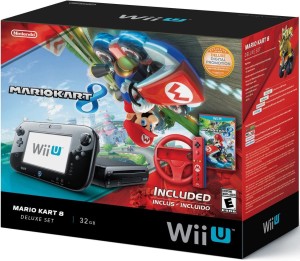 Gamers who purchase Mario Kart 8 between May 30th and June 31st and register their copy on Club Nintendo will be able to get a free download for one of 4 Wii U titles – New Super Mario Bros U, Pikmin 3, Wii Party U, and The Legend of Zelda: Wind Waker.  Nintendo also announced that a new Wii U bundle featuring Mario Kart 8 will be available at the game’s launch. This will include a deluxe system, a physical copy of the game, a red Wii Wheel, and a Mario designed Wii-Mote Plus.