4 min read
Add comment
FacebookTwitterRedditPinterestEmail
It's definitely one of the best current racing games out there.

Sonic & All-Stars Racing Transformed is a racing game in the Sega Superstars series that brings together major characters from different Sega franchises and was developed by Sumo Digital. The game was released for PS3, Xbox 360, and Wii U on November 18, 2012 and later on Windows, Nintendo 3DS and soon to be on the iOS. The game features multiplayer as well as a Career mode with over 20 tracks and 25 playable characters to unlock.

The game is an upgraded sequel to the original Sonic & All-Stars Racing, released in 2010. Like its predecessor, the game features characters in racing vehicles (yes, even Sonic the Hedgehog has a car) that race around tracks while drifting and using weaponry to pass opponents.  Aside from the many Sonic characters, veterans like Amigo from Samba de Amigo and B.D. Joe from the Crazy Taxi series, as well as many newcomers, are playable.  At first glance, this game sounds like a strange Mario Kart knock off and I had my doubts on a Sega racing spin-off. Boy was I mistaken. 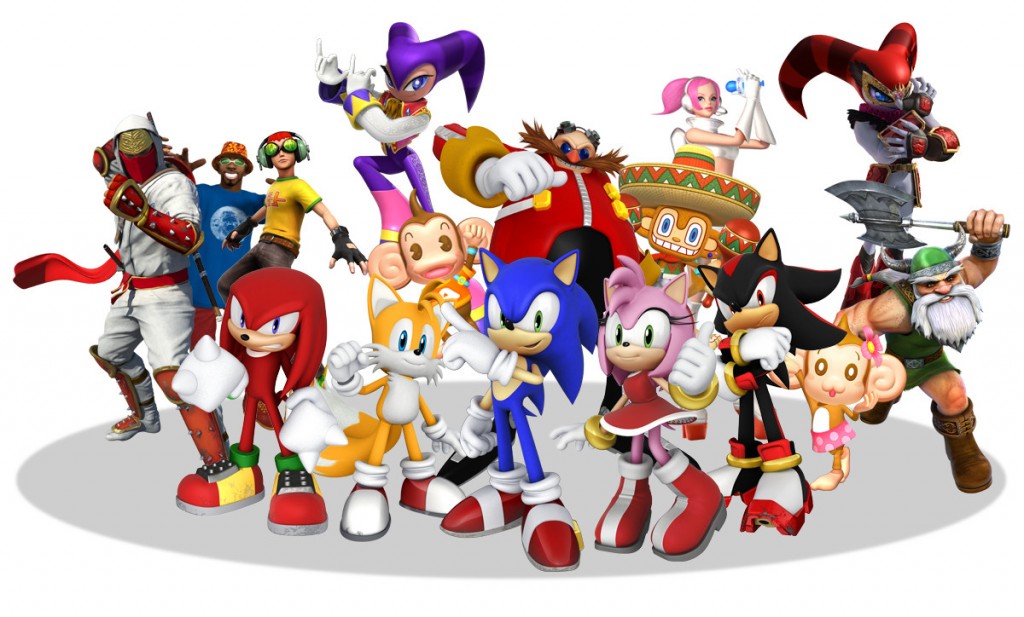 Gameplay: The game focuses around racing  through various courses that smoothly alter after each lap. Some courses have minor changes while others completely change the overall shape of the course. Many courses involve tracks with some combination of road, water, and airways. This is where the Transformed comes into play: the vehicles that each character drives are designed to morph into a different form – one for land, air, and sea. And I’m not just talking about a propeller out the back or a glider appearing on top (sorry Mario) – I mean a full-on transformation… each obeying the law that would be expected from driving a car, boat or aircraft. Characters can also pick up weapons from Sonic-inspired containers that can be used to either attack other players, defend oneself, or increase one’s speed. Doing tricks in mid-air and drifting can also be a game-changer as characters receive a boost from successful maneuvers.

Playing the Wii U version, I was playing multiplayer with the owner of the system. With player 1 using the Wii U gamepad as both a screen and controller, I chose to play with a Wii-mote and nunchuck and had the entire TV as my screen. This arrangement gave me a full display of the game’s superb graphics. With this method of play, it’s easy to see how the Wii U version can support 5 players in local multiplayer races. All versions of the game feature online multiplayer as well. The game supports  every controller compatible with the Wii U.

Graphics: Racers and the various tracks are arranged in great detail.  The characters aren’t blocky in any way, and even things such as eyes and hands are fully developed. The many tracks based on Sega universes are beautifully developed and are a tribute to fans of the different franchises. The game shows off what the Wii U can do and the ability to seamlessly generate vivid characters as well as a massive array of background details shows that it’s on-par with Sony and Microsoft’s current systems. The display on the gamepad is crystal clear and its slightly smaller resolution is almost indistinguishable from the TV. What impressed me the most, however, is that the use of lighting is consistent. As your character goes around the course, lights and shadows move as they normally would when one changes direction.

Sonic & All-Stars Racing Transformed is a great racing game that has proved to be a successful sequel. The game is fun, challenging, and loaded with great visuals and controls. There’s also a ton of great characters and cameos, including playable characters such as Wreck-it Ralph and real-life Nascar racer Danica Patrick. Fans of these franchises will adore the tracks as well as the soundtrack which includes melodies and remixes from those games. You might think that this game could be considered a rip off of Mario Kart, but this game goes in a different direction.

In my opinion, this game is what Diddy Kong Racing could have once been but never had the chance to become. It’s definitely one of the best current racing games out there, and if Nintendo wants to stay on top in this category, the next Mario Kart needs to be top notch. I highly recommend this Sega mash-up. “It’s not just racing, it’s racing transformed!”