Injustice: Gods Among Us soundtrack giveaway

2 min read
8 comments
FacebookTwitterRedditPinterestEmail
The Geek Generation is giving away one prize pack with an AWOLNATION t-shirt and an Injustice: Gods Among Us soundtrack to one lucky fan. 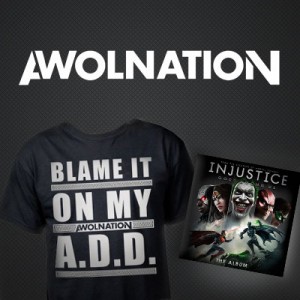 The Geek Generation is giving away one prize pack with an AWOLNATION t-shirt and an Injustice: Gods Among Us soundtrack to one lucky fan.

To enter, leave us a comment below telling us:

Which character from the DC Universe would you want backing you up in a fight?

The contest closes on Friday, May 10 at midnight. We’ll then select one winner from the comments below. Those winners will be notified via the email address they used to sign up.

AWOLNATION have released a new song titled “THISKIDSNOTALRIGHT,” off the new video game Injustice: Gods Among Us soundtrack which is available now. Fans can purchase the soundtrack on iTunes.

Their debut album Megalithic Symphony, which features the hit “Sail”, can be purchased on iTunes.

– Make sure to use a valid e-mail when commenting or I won’t be able to contact you for an address to ship to.
– You must live in the continental United States to win.
– Your email will be added to our post subscribers list. You may unsubscribe at any time.
– Prizes will arrive via Total Assault Music.
– Contest ends on May 10, 2013 @ 11:59 PM EST. Comments left after that time will be ineligible.