Jimmy Fallon officially announced to take over The Tonight Show 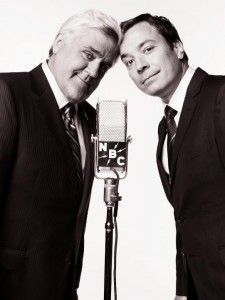 NBC has made the official announcement that Jimmy Fallon will replace Jay Leno as host of The Tonight Show, starting in Spring 2014.

Jay Leno, longtime host of NBC’s The Tonight Show with Jay Leno, announced today that he will wrap up what will be 22 years of headlining the iconic late-night show in Spring 2014. NBC also announced today that Jimmy Fallon, now host of NBC’s Late Night with Jimmy Fallon, will transition into new hosting duties on The Tonight Show franchise after Leno concludes his successful run.

As part of the transition, The Tonight Show will be returning to its original home in 30 Rock in New York and will be executive-produced by Emmy Award winner Lorne Michaels (Saturday Night Live, 30 Rock). Programming plans for the 12:35 a.m. time period currently are in development and will be announced soon. Said Leno: “Congratulations Jimmy. I hope you’re as lucky as me and hold on to the job until you’re the old guy. If you need me, I’ll be at the garage.”

Said Fallon: “I’m really excited to host a show that starts today instead of tomorrow.”

“We are purposefully making this change when Jay is #1, just as Jay replaced Johnny Carson when he was #1. Jimmy Fallon is a unique talent and this is his time. I’m thrilled he will become the sixth host of ‘The Tonight Show’ at exactly the right moment, in conjunction with our coverage of next year’s Winter Olympic Games from Sochi, Russia,” said Steve Burke, Chief Executive Officer of NBCUniversal.

Leno has hosted The Tonight Show with Jay Leno since taking over the reins from television icon Johnny Carson in 1992. (Editor’s note: This is directly from the official press release. Is NBC sweeping Conan O’Brien under the rug?? Bad form.)