3 min read
Add comment
FacebookTwitterRedditPinterestEmail
I'd like to make a bold prediction: Pepper Potts will suit up... in armor... in Iron Man 3. I present my case.

Pepper Potts will suit up… in armor… in Iron Man 3.

If you think my prediction has no merit, allow me to present my case… 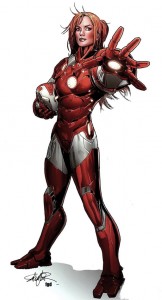 Exhibit A: She already had a suit of her own in the comics.

After an explosion, Pepper gets trapped under rubble with shrapnel stuck in her (sound familiar?). To deal with the severe internal injuries, Tony embeds a strong magnet in her chest, similar in appearance to the arc reactor, but not weapon-based.

Soon after, Pepper discovers a suit of armor that Tony had planned to give to her, and uses it to escape a group of S.H.I.E.L.D. agents following Norman Osborn’s orders. While wearing the suit, Pepper ends up saving a group of students in a collapsing school, catching and landing a distressed commercial jet, and helping the victims of a grain silo explosion. In this armor, she ends up taking the name Rescue.

Iron Man 3 is already pulling other suits of armor from the comics, including James Rhodes wearing the Iron Patriot armor and something near the end of the trailer that appears to be influenced by the Hulkbuster suit. Pulling one more won’t hurt…

Exhibit B: “We do need backup.”

Arguably a toss away line toward the end of the latest trailer, Tony states, “We do need backup.”

The scene that follows is a small army of “Iron Men.” While the Rescue armor (or even any blatant version of female armor) wasn’t clearly seen in this shot, that doesn’t mean it won’t be there. This is CGI we’re talking about and things are easily changed. This render could just be for the trailer to keep things under wraps, while a final render could include the Pepper’s armor. And who’s to say she’s not in one of those suits that we are seeing? Armor doesn’t have to fit the figure to fit a person.

I’m trying to imagine a scenario in which Pepper would be standing in front of a giant fire in just her bra. In the context of Iron Man movies, the first thing that popped into my head was that she is either about to get into a suit of armor, or just got out of one. Why not wear something form-fitting that covers the body like Tony normally does? Easy answer… this is Hollywood, baby. We wanna see the underwear.

So there’s my case, now you be the judge. Do I have a solid argument here, or am I looking for clues that don’t exist? Let me know in the comments.